Diamondback moth (DBM), Plutella xylostella L., is a significant and highly mobile pest of commercial canola crops in the western and southern regions.

DBM can rapidly evolve resistance to insecticides and reduced sensitivity to a range of chemistries is widespread in Australia.

Low to moderate reductions in sensitivity of DBM in WA have been detected to group 5, 6 and 28 products, and moderate to high-level resistance to synthetic pyrethroids group 3A.

To maximise DBM control and insecticide longevity, growers are advised to employ an integrated pest management program that includes:

In 2020, as part of a GRDC co-investment studying the causes and dynamics of DBM outbreaks, researchers from the Department of Primary Industries and Regional Development (DPIRD) in Western Australia collected DBM populations from locations across the Western Australian grain belt.

Each population was exposed to a discriminating dose (DD) of insecticide calculated to kill 99.9 per cent of a susceptible (non-resistant) population.

“Among the 17 DBM populations from WA canola crops that we screened in 2020, we detected varying degrees of reduced sensitivity to all five chemistries tested,” he says.

“For a fully susceptible DBM population, the expected percentage mortality for all insecticides tested in these DD bioassays is one hundred per cent. Mortalities less than 95 per cent indicate reduced sensitivity has developed.

“Similar resistance profiles were observed in all 17 DBM populations.”

Dr Perry says the results are broadly consistent with resistance screening data for DBM from Australian canola crops over the past decade, with some evidence for a slight decline in DBM sensitivity across all the tested products over recent years.

“In the case of emamectin benzoate a slight decline in sensitivity could reflect greater use of this product to control DBM outbreaks in WA canola in recent seasons,” he says.

“In general, what these resistance levels mean for field performance is unclear as many factors are involved.

“However, resistance to emamectin benzoate insecticides may be approaching levels where some loss of field efficacy could occur, although this may or may not yet be detectable.

Pyrethroids may cause a population increase

Evidence of moderate to high-level resistance to synthetic pyrethroids (group 3A) was common across all tested DBM strains. Dr Perry says the result was striking but not surprising based on previous studies.

“At these levels of resistance, we expect synthetic pyrethroid (SP) spray treatments to be almost completely ineffective for controlling DBM in canola in most instances,” Dr Perry says.

“In fact, using SPs could lead to an increase in DBM numbers, due to their harmful effects on predatory and parasitic insects that would otherwise attack and help regulate DBM populations.

“We recommend growers do not use SPs in canola in spring where DBM is a problem.”

“This may reflect gene flow resulting from DBM movement from Brassica vegetable crops, where these insecticides are frequently used, into canola crops” he says.

“Alternatively, it is possible that metabolic cross-resistance is conferred by other chemicals used for DBM control in canola.

“The screening results and related laboratory studies show a general correlation between levels of resistance to emamectin benzoate (Affirm®) and chlorantraniliprole (Coragen®) within DBM strains, which supports this possibility.”

Plan insecticide use to manage resistance 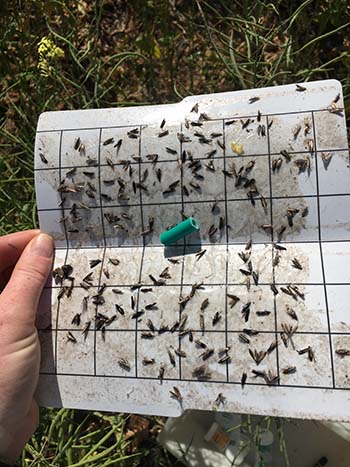 The sticky inside of the DBM trap with trapped moths. Image: DPIRD

To maximise the effective life of these products, grower and advisors should use chemicals only when necessary, and rotate mode of action groups by adhering to GRDC’s Resistance Management Strategy (RMS) for DBM in Australian canola.

Canola growers are advised to avoid pyrethroid (Group 3A) and organophosphate (Group 1B) insecticides in canola when DBM is problematic.

It is important to adhere to withholding periods when spraying before harvest, noting that windrowing is defined as the harvest event.

Rotating between different insecticide chemistries as outlined in the RMS will help reduce the likelihood of resistant individuals surviving to maturity.

Research conducted by Dr Perry in South Australia and western Victoria established that an abundance of brassica weed hosts over summer could lead to DBM infestations as early as May or June.

“DBM only survives on brassicas and wild radish seems to be the most problematic host here in the west.”

Dr Severtson says WA canola growers should eliminate potential hosts in summer, then sweep their crop regularly from early August and note any trends in the number of DBM being caught.

“DBM has a small caterpillar that matures quickly in warm conditions, so an outbreak can develop very quickly in favourable spring weather,” he says.

“I have seen DBM caterpillars wipe out a flowering canola crop within a week of caterpillars and chewing damage being detected.”

While an IPM strategy should always begin with green bridge control, DBM also has a number of insect predators including parasitic wasp species such as:

Brown and green lacewings, several other predacious bugs and a range of spiders also feed on DBM eggs, larvae and pupae.

In warm, humid conditions the airborne fungus Zoophthera radicans can infect DBM caterpillars and reduce numbers by as much as 90 per cent.

“Our pheromone traps have shown that high adult numbers don’t always translate into a large larval population and we think that is due to these natural controls,” he says.

He recommends growers work with an agronomist or adviser to determine a suitable crop monitoring regime. A spray threshold should consider growth stage, growing conditions and grain prices to determine when insecticide will deliver the best economic return, as explained in GRDC’s Diamondback moth resistance management factsheet.

“Once the threshold is passed, insecticide should be applied promptly to control the population while it is relatively small,” he says.

“Group 28 chemistries will provide a new insecticide option, but DBM’s ability to develop insecticide resistance means a comprehensive IPM program will always be the most effective strategy.

“Growers and advisors are strongly advised to familiarise with and adhere to GRDC’s Resistance Management Strategy for DBM in Australian canola.”