ZnP-coated wheat bait is the only registered in-crop rodenticide for the management of mouse damage in broad-scale agriculture in Australia. The new Australian Pesticides and Veterinary Authority (APVMA) emergency use permit increases the concentration of zinc phosphide active per wheat grain from 25 g/kilogram to 50 g/kg of mouse bait.

The bait will still be applied on-farm at one kilogram per hectare but will have twice as much ZnP on each grain, increasing the likelihood of a mouse consuming a lethal dose in a single feed.

This GRDC/CSIRO research is the first laboratory-based wild house mouse bait efficacy study done in Australia since the chemical was registered for agricultural use around 20 years ago.

Industry body Grain Producers Australia (GPA) applied for the APVMA emergency use permit based on the research outcomes.

CSIRO researcher, Steve Henry, who led the study said the lab findings showed the bait prepared at this new mixing rate was lethal in all mice while the previous bait mixing rates was only lethal in 50 per cent of mice.

“It is critical that every grain of bait represents a lethal dose,” Mr Henry said.

“Our lab research has shown that mice rapidly develop aversion to the bait, meaning that if they do not consume a lethal dose from one grain of bait, they will not consume any more toxic grain.”

GRDC Pests Manager, Leigh Nelson, said the increase in bait mixing concentration was expected to be well received by industry, especially as many growers in eastern Australia were currently battling high mouse numbers ahead of winter crop planting. 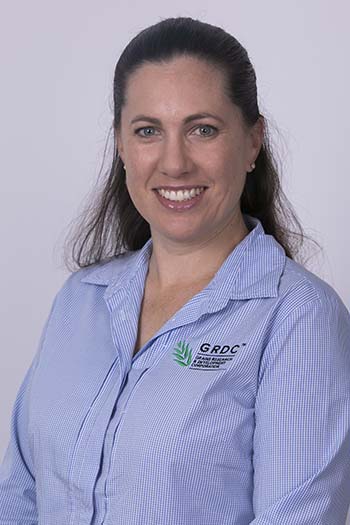 GRDC Pests Manager, Leigh Nelson, said the increase in bait mixing concentration was expected to be well received by industry, especially as many growers in eastern Australia were currently battling high mouse numbers ahead of winter crop planting. Image: GRDC

Dr Nelson said current farming practices that conserved water and were environmentally sustainable, such as minimum or zero tillage, had resulted in a significant increase in both available shelter and alternative food sources for mice.

“Mouse management requires an integrated approach and a key part of this is the reduction of alternative food sources, such as grain being left in the paddock post-harvest. This residual grain greatly reduces the probability of a mouse encountering and consuming a treated grain,” she said.

“So even with the increased bait mixing concentration, growers will still need to ensure they implement best practice tactics on farm for effective mouse control.”

The efficacy research produced consistent, scientifically rigorous results and followed the Organisation for Economic Co-operation and Development (OECD) guidelines and was approved by a CSIRO Animal Ethics Committee.