Predicting and controlling viral epidemics in pulses is challenging, with more than 70 different viruses reported worldwide.

Pulses are still a young industry in Australia and fortunately many of these viruses have not found their way here, but at least nine pulse viruses in Australia have caused concern in one or more species.

As pulses are an increasingly important crop in Australia, the development of effective virus control packages is crucial.

Viral diseases differ from fungal diseases. Fungal diseases generally have survival mechanisms to bridge cropping seasons, while viruses (except for a few that can survive in seed) need living host tissues - a 'green bridge'. Most viruses also need an insect vector - usually aphids - to move from infected to healthy plants.

Viral diseases of plants have proved more challenging to manage than fungal diseases.

While the most significant fungal plant diseases are specialised on a single host species, pulse viruses survive on a range of cultivated and weed hosts and in some cases even on non-pulse species.

The influence of the environment on the availability of summer hosts and on vector movements makes it difficult to predict virus epidemics.

Growers are further discouraged by the impossibility of eradicating a virus from an infected plant, as opposed to fungal diseases for which a range of control options are available.

The threat of pulse viruses in Australia became clear when varieties developed for the southern region were first tried in the northern grains region in the 1980s and 1990s.

Summer rains in this region provided the green bridge that ensured survival of viruses and virus vectors.

Leaf yellowing and plant stunting were frequently observed, but initially attributed to drought or herbicide injury.

High virus incidences in chickpea were first attributed to Beet western yellows virus (BWYV), but were actually caused by the closely related Turnip yellows virus (TuYV), which was indistinguishable by the available antisera.

In 2014, this prompted GRDC to invest in a collaborative project, led by the NSW Department of Primary Industries (DPI), that brought together virologists and experts in germplasm selection from Agriculture Victoria, DPIRD, NSW DPI and QDAF. 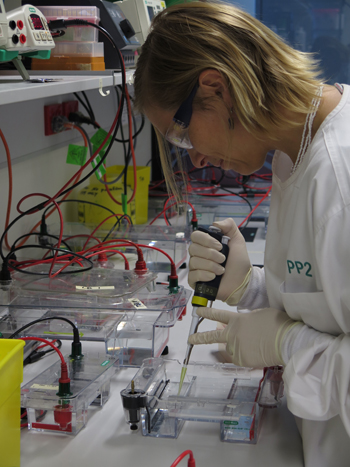 A major focus has been the study of TuYV and related viruses. Advanced molecular techniques showed a virus complex consisting of several species including Phasey bean mild yellows virus (PBMYV) and several strains of TuYV.

Collaboration with the International Center for Agricultural Research in the Dry Areas also allowed comparison with related virus strains that occur in the pulse-growing regions of the Middle East, Africa and the Indian subcontinent.

Major progress has been made to simplify these molecular techniques, which will result in fast, molecular-based virus diagnostic tools for growers, agronomists and breeders.

Understanding the composition of virus populations and their vectors underpins development of different virus management packages. However, resistance - although it is virus and host species-specific - remains the best and most cost-effective virus control.

The early identification of PSbMV in field pea and BLRV in faba bean and field pea initiated the evaluation of large germplasm collections, which resulted in the identification of sources for resistance. New varieties with good levels of resistance have subsequently been released by the breeding programs.

As lentil cropping is expanding into more virus-prone environments, this will require new varieties with improved virus resistance, particularly to CMV and BLRV. Field screening over the past two years has identified several lentil lines with outstanding levels of BLRV resistance, now being used by the breeding program.