New research demonstrates mixed farmers may be able to increase whole-farm profit by growing a cover crop during summer.

The two-year study, with investment from NSW Department of Primary Industries (DPI), GRDC and the Cotton Research and Development Corporation, was established at Canowindra and Parkes in central NSW.

During 2019, a summer sorghum forage crop grown at Canowindra produced 10.8 tonnes per hectare of biomass, while the same crop at Parkes produced 2.1t/ha.

"Growers with livestock can convert summer biomass to dollars," he said. 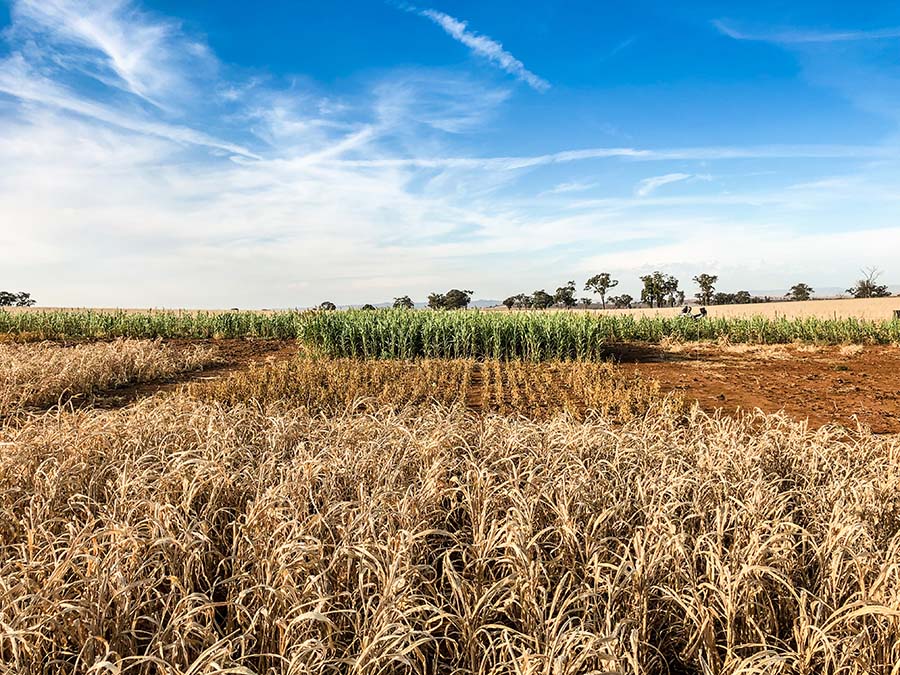 An experiment at Canowindra and Parkes, New South Wales, has highlighted the benefits and risks associated with cover crops. Photo: Colin McMaster

In dry conditions, Mr McMaster said cover crops may be beneficial for continuous croppers who have paddocks with less than two to three tonnes per hectare of ground cover. He said this was because the summer crop and its residue will protect topsoil from wind and water erosion.

Mr McMaster said year one of the two-year experiment resulted in a failed establishment, which highlighted some of the risks associated with sowing a cover crop in hot conditions.

"Sowing in November or December followed by 10 days of 40°C temperatures is likely to cause the soil to dry out quickly, particularly when tyned seeders are employed," he said.

"You need to have everything ready and use a disc seeder, if possible, to sow quickly after rainfall." Mr McMaster said summer cover crops reduced subsequent winter crop grain yields by 1.5t/ha at Canowindra (after sowing on 18 May) and 0.6t/ha at Parkes (after sowing on 25 May).

"The cowpeas were no different to the summer weeds," Mr McMaster said. "They did not fix much nitrogen and provided very little cover."

At Canowindra, forage sorghum produced 10.8t/ha of biomass, while the mixed species cover crop produced 4.5t/ha. Although all the cover crops evaluated depleted soil moisture, the amount of residue left after termination allowed the soil to recharge with water more quickly than the bare soil treatments.

Mr McMaster said the speed of water recharge was most evident after the first rainfall event.

"The capacity of the soil to 'catch up' to the bare ground soil depends on the time of sowing," he said.

Mr McMaster said lower soil temperatures are important because temperatures more than 25°C can reduce early crop establishment in winter grazing cereals. Another finding of the experiment was that early termination of cover resulted in a lower grain yield reduction in the following winter crop. "We estimated late-terminated forage sorghum could add $3716/ha to whole-farm income at Canowindra if six-month-old 30-kilogram crossbred wether lambs use 80 per cent of the biomass."

At Parkes, the bareground treatment had the highest mineral nitrogen level at 152.8kg/ha. It was reduced on average by 69kg/ ha, 61.1kg/ha, 50kg/ha and 34.6kg/ha under forage sorghum, mixed species, cowpea and summer weeds respectively.

"However, the additional income generated through grazing will more than compensate for the extra nutrients that need to be applied for the following winter grain crop," Mr McMaster said.

At Canowindra, the average total carbon in the top 10cm of soil was trending upward under the summer cover crops. Compared with the bare ground treatment, which was 1.76 per cent, total soil carbon increased by 0.36 per cent, 0.33 per cent, 0.22 per cent and 0.11 per cent under forage sorghum, mixed species, summer weed and cow pea treatments respectively. At Parkes, not enough biomass was produced to alter the soil carbon level.