With low crop water availability and high grain prices, growers and advisers are re-evaluating late sowing options for grain sorghum. To support this discussion, experts from the University of Queensland, the University of Southern Queensland and the Queensland Department of Agriculture and Fisheries summarise the known effects of late sowing on sorghum productivity, production risks and crop management options.

Before considering planting a sorghum crop, growers and advisers should think about soil water content.

Most importantly, they should only consider sowing once minimum thresholds for stored soil water match acceptable yield targets and crop failure likelihood.

Research consistently shows that plant-available water (PAW) stored in the soil prior to sowing and the timing of in-crop rainfall have the greatest impact on sorghum yields and crop failure risk across the conventional sowing period for Australia's dryland sorghum production belt.

Online tools including CliMate and CropARM allow growers to estimate stored soil moisture, evaluate the likelihood of refilling the soil profile before the proposed sowing date and compare the effect of stored soil water on crop failure risk for their own properties.

This season, not sowing a grain crop at all could be the best option because of low levels of stored soil water, ground cover and seasonal rainfall forecast.

However, sowing a sorghum crop that fails to produce grain still has benefits as a cover crop.

Long-term simulation analysis shows that yields are relatively similar regardless of sowing dates throughout the conventional sowing window when soil water content is similar at sowing.

Beyond the conventional sowing window, minimum temperatures limit the latest sowing dates for sorghum across north-eastern Australia even when soil water is non-limiting.

However, sowing time implications on cropping systems and the effects of pushing sowing times beyond conventional windows is currently under evaluation by the GRDC-funded 'Optimising Sorghum Agronomy' project (UOQ 1808-001RTX).

The conventional sowing window for sorghum is from December to mid-February for central Queensland, and September to mid-January for southern Queensland and northern NSW.

The later sowing dates increase the likelihood of cold temperature injury at flowering, grain filling and during harvest desiccation. 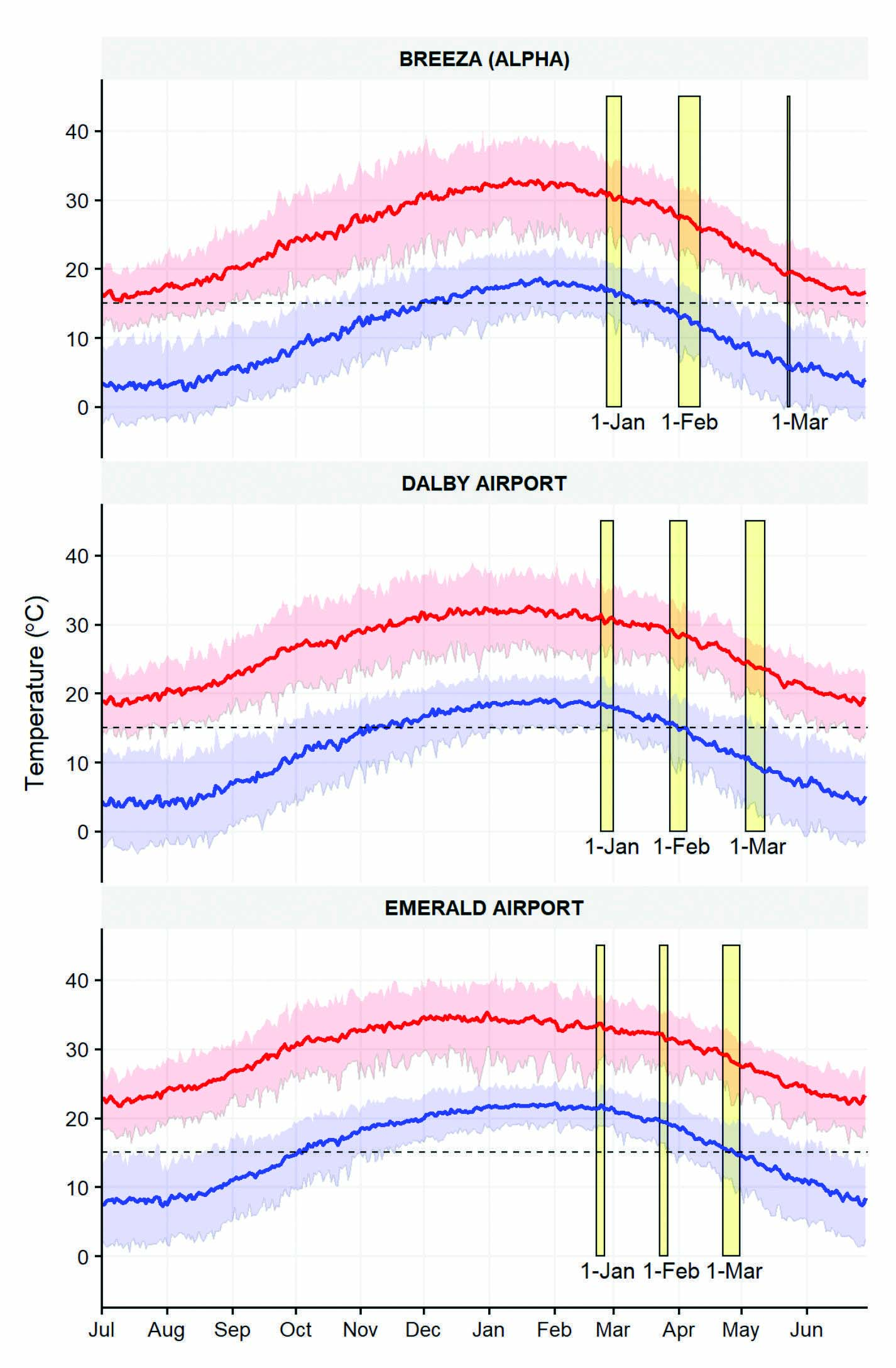 Daily minimum temperatures less than 15°C during the period from flag leaf ligule emergence until flowering cause pollen infertility and increase ergot and yield loss risks in some cultivars.

A single day during the flowering period with temperatures below the chilling threshold can cause a horizontal band of sterile florets in the panicle. Three to five consecutive cold days are required for complete panicle sterility.

Several international breeding programs developed germplasm with tolerance to 5°C minimum temperatures during flowering, but we assume a threshold of 15°C for Australian germplasm.

Re-evaluating the value of the chilling tolerance traits throughout the crop cycle and impact of genetic gains on cold tolerance of Australian germplasm would be timely.

The main stem of a medium-maturing sorghum hybrid sown later in this window at Breeza, NSW, and Dalby and Emerald (Queensland) will flower when minimum temperatures are less than 15°C in about 25 per cent of seasons (Figure 1).

The severity and timing of frost have very different impacts on sorghum. Stem frost during early grain filling can stop grain filling and cause pinched grain or complete crop failure. Mild frost late in grain filling will not influence grain production but could reduce desiccation efficacy and harvestability.

Growers and advisers need to consider local micro-climatic influences on temperatures across fields and around the sensitive developing panicle when interpreting these approximate regional recommendations. 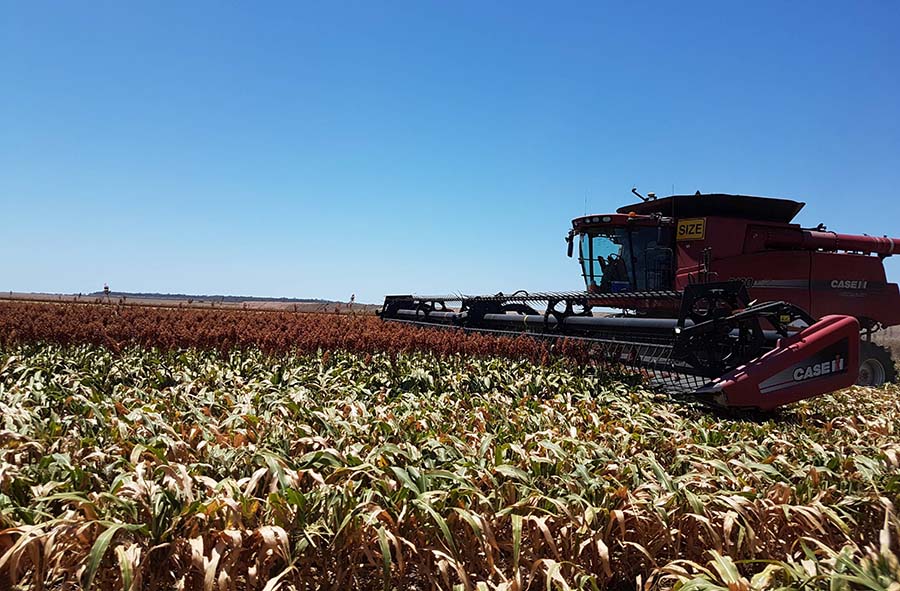 If growers and advisers decide to sow late, they should select early maturing hybrids and planting configurations that minimise tillering.

Tiller flowering is delayed relative to the main stem when crops are water-stressed pre-flowering and this delay increases chilling risk.

Narrow distances (less than 10 centimetres between plants) reduce tillering and can be achieved with high planting rates or skip-row configurations.

In late-sown sorghum it will be important to watch for sorghum ergot, caused by the fungus Claviceps africana, as temperatures start to cool off at the end of the season and the sorghum is still flowering.

Outbreaks are favoured by at least two rainy days and maximum temperatures below 28°C.

The fungus produces toxins that can affect milk production in cows and sows and weight gain in feedlot cattle, so it is important to check for sclerotes, the survival structure of the fungus, at harvest.

Sclerotes can be identified by taking about 100 grams of grain and sorting it.

After first sorting the good grains first, check for sclerotes, which will appear to be small, grey or white immature sorghum grains but more elongated.

If sclerotes are found, check with the Queensland Department of Agriculture and Fisheries or NSW Department of Primary Industries for information on acceptable contamination levels and what can be done with the grain.

Soil insect pressure is potentially high with late plantings, as false wireworm, wireworm and scarab larvae are larger and more voracious than earlier in the season.

Other establishment pests, such as earwigs and cockroaches, will be concentrated on anything green and edible. It is important to check for the presence of establishment pests prior to sowing using germinating seed baits and/or potato baits.

Typically, the risk of sorghum midge attack increases with later sorghum plantings because midge build up in both Johnson grass and sorghum crops.

This season, however, the prospect of major midge outbreaks are greatly reduced because of the limited availability of Johnson grass (first seasonal host) and early sorghum plantings.

In irrigated situations, there may still be the potential for some midge to build up locally.

Similarly, Helicoverpa armigera can build up locally on suitable crops and weeds in irrigation areas. However, the build-up of populations in crops and weeds through summer seems less likely.

Migration of H. armigera from other cropping areas, such as central Queensland, is possible given suitable weather conditions.

Despite the dry conditions, NPV (the virus nucleopolyhedrovirus, which occurs naturally in the Australian environment) will still be a very effective option for Helicoverpa. This is as long as good coverage is achieved at application, ensuring larvae encounter and ingest the product in the first 12 hours post-application.

Rutherglen bug reproduction slows in February and March, with fewer eggs produced by females as they enter reproductive diapause in autumn.

Consequently, the large populations often seen in maturing heads are less likely. But the potential yield losses that can occur with infestations at flowering-grain fill can still occur if large numbers of adults migrate into crops. 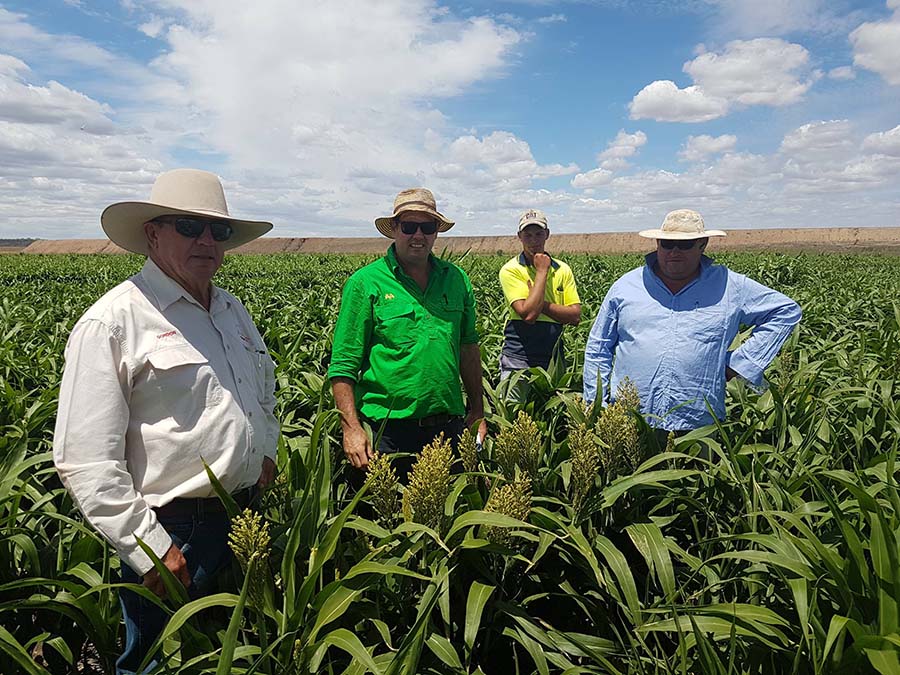 Because of the extended dry conditions during the previous 12 months, soil mineral nitrogen is likely to be low due to a lack of mineralisation from either soil organic matter or soil surface residues from the previous crop. This may be offset somewhat by extra residual fertiliser nitrogen unused in a previous crop that yielded less than expected.

Regardless, most of the soil nitrogen that is there will be quite shallow in the soil profile. Depending on the amount of residual fertiliser, there may be a need for slightly greater-than-normal fertiliser nitrogen applications for a coming crop.

The efficiency of recovery of this nitrogen applied at/near to planting is often low because there is no wetting front to move the nitrogen deeper into the root zone.

Some fields in the Darling Downs that have been in fallow for multiple years are showing very high soil mineral nitrogen and will not need any additional nitrogen fertiliser applications.

The other issue is the level of VAM (mycorrhizae) activity and resulting effects on access to phosphorus and zinc.

Many fields have had extended bare fallows due to the dry conditions. As a result, sorghum crops sown into these fields may have very limited colonisation with VAM and so a reduced ability to access phosphorus and zinc from the bulk soil.

As a result, starter fertiliser will be an important consideration this season, with products that combine both phosphorus and zinc preferred.

Use of starter fertiliser is also often more beneficial if soil moisture is marginal, as the crop roots have less access to the rest of the topsoil that usually has sufficient phosphorus and zinc supply.