A pitfall trap in a control plot (chaff removed) at Jeparit in Victoria.
Photo: Kate Muirhead

GRDC has invested in research to investigate the effect of chaff residues on the diversity and abundance of invertebrate pests and their natural enemies.

HWSC systems in Australian grain crops play an important role in weed management with the rise of herbicide-resistant weeds. The loss of effective herbicides for several major weed species has required the development of management tactics that prevent weed seeds from entering the seed bank.

Chaff piles, chaff tramlining and chaff lining are HWSC system methods that result in a concentrated distribution of the chaff component within the paddock, limiting weed survival.

However, some growers adopting these HWSC systems have observed increased pest pressure associated with chaff residues and they are particularly concerned about the potential risk of associated crop damage. 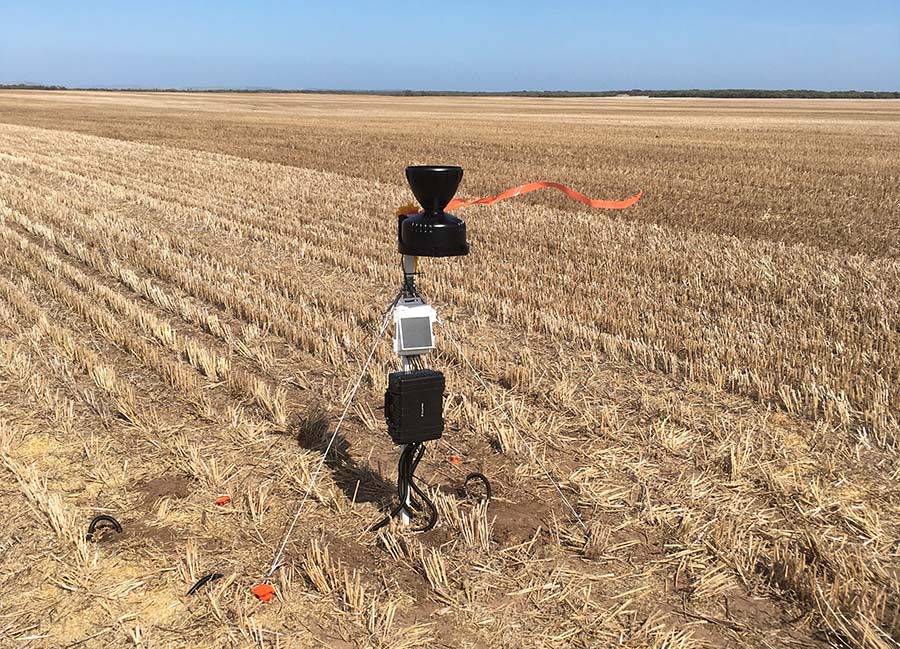 A Hobo weather station installed near Cummins in South Australia. The Hobo is measuring, rainfall, temperature, relative humidity and soil moisture in the chaff and control areas. Photo: Kym Perry

The research is being led by the South Australian Research and Development Institute (SARDI), which is the research division of the Department of Primary Industries and Regions.

SARDI entomologist Dr Kate Muirhead says the study is being conducted in 14 paddocks at various locations across the GRDC southern region, including Yorke Peninsula, Eyre Peninsula and the Mid North of SA, as well as Western Victoria.

The trials are being managed by Hart Field-Site Group and Nutrien Cummins Ag Services in SA and Birchip Cropping Group in Victoria.

“The main beneficial groups are predatory mites and beetles, ants, and organic matter recyclers such as collembola, book lice, and others.”

The diversity of pest and beneficial invertebrates in experimental plots will be assessed at two times each year over the course of the study – in autumn prior to sowing and soon after crop emergence.

Dr Muirhead and her team recently removed pitfall traps installed in the 14 paddocks included in the study.

“The contents will be subject to diagnostic analysis over the coming weeks, and we will re-install the pitfall traps once those paddocks have been sown to crops,” she says.

“A time lapse video camera will also be installed on each of the seven farms after sowing to monitor crop seedlings and directly identify which species are causing the observed damage.”

The project will conclude in April 2024, and the research outcomes will inform the need for specific management of crop pests in HWSC systems and address potential barriers to their adoption by quantifying the risk to crops from invertebrate pests.