Knowledge door opens on a slice of cake

Knowledge door opens on a slice of cake

Sophie and Luke Bradley with their children Fletcher, Mackenzie, Georgia and Hunter on their Springsure property, near Emerald in Central Queensland.
Photo: Rowdy Travis

On the last stop of an epic car journey across the US with his wife Sophie and four children in tow, Central Queensland grower Luke Bradley pulled up at the headquarters of Nutrien Ag Solutions.

The family had already been on the road for seven weeks, travelling 14,500 kilometres across the country and visiting farms as part of Luke’s GRDC-supported Nuffield Scholarship. But Luke wanted to visit Nutrien, then known as Crop Protection Services. It is one of the world’s largest crop inputs companies and Luke wanted to find out more about its precision agriculture (PA) products.

Despite his best efforts, Luke had failed to make an appointment but was used to chancing his luck. That day he was in luck. Fronting up to the entrance, he offered to help an employee struggling with a massive cake box. It was the then general manager’s last day and the cake was for the send-off.

Accepting Luke’s offer of help, the conversation turned – as it often does when a Central Queensland accent is heard out of place – to what Luke was doing in Lamesa, Texas.

Luke told the employee his story. He was a grain grower from Australia, exploring variability and PA’s role in managing it. Soon, with a slice of cake in hand, Luke soon found himself chatting to the outgoing general manager, gathering more contacts to visit when his tour took him to Argentina.

“This is what a Nuffield does,” Luke says. “It opens doors for you to learn and bring that information home with you.”

Luke and his family also visited many growers on his 2017 tour, wanting to speak to producers like him – those facing variability – and learn how they were managing it. Despite the opportunity for introductions via the Nuffield network, he opted to find the growers himself. So, with Sophie and the children, he drove across the US, stopping in at local agronomy services similar to the agricultural chemical and advisory resellers that dot Australia.

Luke would ask if these local agronomists could recommend a few local growers to visit. Phone numbers in hand, Luke would then cold-call farmers and, from there, travel to their sheds and paddocks. “That’s how you learn. I wanted to see different people and time after time they told me what was working for them.”

Luke had been interested in variability and how to manage it for some time. Time spent as a contract farmer across an area that stretches 2500km from Queensland’s Richmond to Uralla in NSW had given Luke the opportunity to mull the issue over. “It was easy to see there were enormous variations in fields, yet they were all being treated the same way in regard to seeding and nutrition rates.”

So, via his GRDC-supported scholarship, Luke set out to explore PA and how to best use the myriad data available to manage variability.

For Luke, who with Sophie and his parents Peter and Kerrie farms 5300 hectares at Springsure near Emerald, that variability is water. “We need to be flexible to deal with our seasons to decrease risks both environmentally and financially. We have the ability to treat areas differently and the equipment and technology to do that. We just need to make it simple and worthwhile.”

From his US travels, plus trips to New Zealand, Brazil and Argentina, Luke found that, like him, all producers were managing variability. He says common thinking is that changes in legislation often drive growers to change nutrient or water use. But this is incorrect. “I found that most farmers are ahead of any new regulation. We can see the writing on the wall, so to speak, and start using data to manage variability and inputs to meet any emerging changes.”

Sophie and Luke Bradley with three of their children (Hunter, Mackenzie, and a jumping Fletcher) on their Springsure property, near Emerald in Central Queensland. Photo: Rowdy Travis.

On his own farm, where 4000ha is cropped to sorghum, barley and wheat and a 300-head beef cattle herd is run on less productive land, Luke had been collecting yield data for nearly a decade.

He wanted to use this information, plus other data, to decide whether creating and implementing variable-rate nutrition prescriptions would be worthwhile. These would see varying amounts of nitrogen applied according to paddock and crop needs.

As nitrogen use efficiency (NUE) correlates to water use efficiency (WUE), Luke decided to benchmark his WUE with the support of farm financial consultancy business, Agripath. This provided an average based on season and production, but Luke wanted more defined information.

The farm’s annual average rainfall is meant to be 603 millimetres. But the past four years have seen the farm’s worst 12, 24, 36 and 48 months in a 132-year record-keeping history. Water and its use are paramount.

Using readily available GRDC WUE datasets for sorghum and a software program called Agrian®, Luke got to work. He exported harvest yield files into the program and shifted parameters to create nine nutrition zones. From this, he built a spreadsheet for sorghum yields that changed based on varied inputs.

That work began to justify the costs involved with creating a variable nutrition program. “It showed a seven per cent yield gain for sorghum if we developed prescription maps for our urea.

“This is the data I needed to justify spending money on changing our nutrient management program. I was not rewriting the book, but just taking that readily available information and adding it into our business risk profile to create prescription maps.” 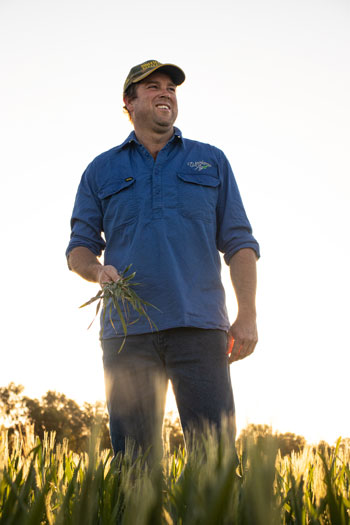 This, however, was just the first step in the process – essentially confirming that the time and effort required to create prescription maps would be worthwhile.

The next step was to create them, and this is where his Nuffield travels helped. Most of the growers he visited commonly used a PA service to build variable-rate nutrition programs, a topic he was also able to discuss during his unannounced visit to the headquarters of PA provider Nutrien Ag.

Back in Australia, Luke now runs continuous variable-rate nutrition program based on 30 zones. This compares to his past practice of blanket urea applications at 120 kilograms/ha.

The plan is working well, surpassing the seven per cent return on investment he had initially calculated.

As well as financial gains, the changes are also important for the environment and any future regulation changes. “We’ve seen regulations change for cane farmers and I think reef regulations will get stricter. Basically, I think of what we’ve done as being organised. I have all the information needed and can make decisions on that.”

It has been a busy few years for Luke and his family, which has also included purchasing a coastal property, about 400km east of Springsure, to spread financial and climatic risk. “We will redevelop the property into an irrigated cropping operation for corn and mungbeans – crops that are more of a financial risk in Springsure.”

And he is still considering future data uses. That could include ameliorating sodicity on 1400ha. At the moment, it is cost-prohibitive to fix with a blanket application of gypsum. However, he could employ data to identify areas to cost-effectively treat. Using electromagnetic induction (EM38) would provide a measure of soil electrical conductivity which, converted to soil type, could help map sodicity.

“I need to justify what will be the benefit if we do spread gypsum and the income we will get from that decision.”

Another plan is to look at evapotranspiration (ET) in-field. “I’ve talked to a few companies about this to learn how well our total ET in-crop and in-season compares against WUE. Doing so will allow me to assess how well we are set up for making the most out of a season, if on-farm practices such as stubble management, rotations and the move to narrower rows are working.

“Or whether we should plant more cover crops or not plant in certain areas. We have the ability to treat areas differently – and the equipment and technology to do that – we just need to make sure it is worthwhile.”

Although this data is available, it takes time to understand and interpret. “Like all farmers, we want simple solutions to what we are doing. I don’t want to become an ‘office’ farmer. Instead, I want data to help make long-term decisions.”

By extension he is also keen to simplify other farming and business practices. For Luke this means “slowly progressing”. “This is what a Nuffield Scholarship gives you – the opportunity to open your eyes and develop an open-minded thought process. Nothing changes overnight but you open up to new ideas.

“You need to look at your own farm and do what is best for different land uses. For us, that is running our beef operation on our lower-performing areas and concentrating on what we do well – a dryland sorghum and wheat rotation. We invest time and effort into growing these crops. It is where we get the greatest return.”