In northern farming systems, where plant-available water (PAW) is considered ‘king’, growing cover crops can be seen as detrimental.

Yet research that is winding up has not only supported growers’ experience by showing that cover crops can increase net PAW accumulation, but it has showed that cover cropping can dramatically increase the following crop’s yield. Measured yield gains in one experiment represented an increase in returns of between $250 and $380 a hectare.

In the northern region, only 20 to 40 per cent of rainfall is typically transpired by dryland crops, says Andrew Erbacher, a research agronomist with Agri-Science Queensland at the Department of Agriculture and Fisheries (DAF). Up to 60 per cent is lost to evaporation and a further five to 20 per cent is lost in run-off and deep drainage.

Mr Erbacher says that grain yield for Queensland and northern NSW growers depends on the ability to store water over the fallow for use by the next crop.

“Not all rainfall is captured in the soil. For example, moisture near the surface is exposed to evaporation, while in heavy rainfall events water may not infiltrate as quickly as it falls, so the excess will run off the paddock. And, in long fallows, water may move down the profile, deeper than the plants are able to access.

“These factors determine the fallow efficiency (FE), the percentage of rainfall captured and available for use by the crop. The end goal is for crops to transpire as much water as possible, converting water and nutrients to grain yield.”

Every 10 millimetres of extra stored soil water available to crops could increase dryland grain yields by up to 150 kilograms/ha. So, growing crops that do not produce grain or fibre is understandably considered ‘wasteful’. 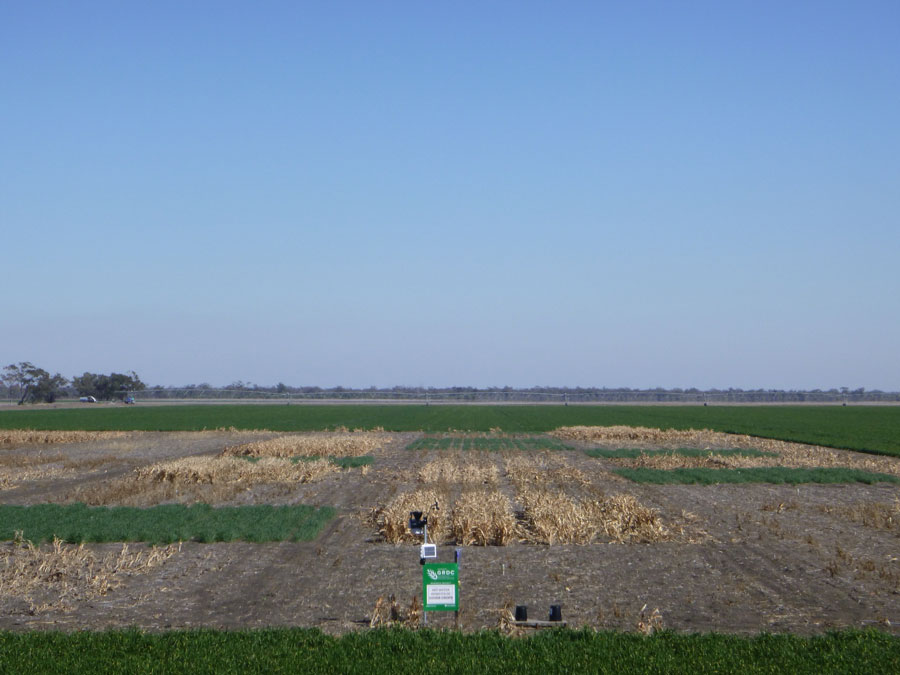 With a common recognition that higher ground cover yields a higher FE, trials were established by GRDC, DAF, NSW DPI and CSIRO to quantify the net effects on soil water from growing cover crops.

One of the experiments was at Bungunya, west of Goondiwindi, in a long-fallow paddock.

Skip-row sorghum had been harvested in early February 2017, while deep phosphorus was applied in August 2017. To level it, the paddock was ‘Kelly-chained’ (a form of tillage) in September 2017 and was left with little cover until the planned wheat crop.

The trial saw cover crops – millet, sorghum, lablab, multi-species (millet, lablab and radish) – planted into about 120mm of plant-available soil water in October 2017.  A control plot was left to fallow.

The millet cover crops had early, mid and late termination dates. Respectively, they were at first node, at flag leaf emergence, and at anthesis. Sorghum, lablab and the mixed-species treatment were sprayed out at the same time as the mid-terminated millet.

The subsequent wheat crop was planted on 1 May 2018. Rainfall was 383mm from cover crop planting in October 2017 to wheat harvest in November 2018.

Interestingly, Mr Erbacher says, water extraction by the wheat crop also increased where millet cover crops had been grown. This compares to the control, which had lower yields.

Although his team is still working out why, it is perhaps due to less root development. “We think this is largely a factor of cover crops holding more moisture in the surface, allowing a more even crop establishment. This means the next crop is better able to explore the soil to find and extract water and nutrients. This grows a stronger crop, which can then allow the crop to devote more energy into roots to explore the soil profile better and deeper.” Yet, measured yield gains were greater. Mr Erbacher says they did not budget on the crop extracting more, making the measured yield gains for these treatments much higher – at 950kg/ha, 1461kg/ha and 1129kg/ha respectively, representing increased returns of between $250 and $380/ha.

“Importantly, these results were achieved in drier-than-normal seasons. For example, the Bungunya site with millet cover crops had a wet spring that allowed a well-grown cover crop to develop, but was then followed by well-below-average rainfall through the fallow, with a few good storms in February and March.” 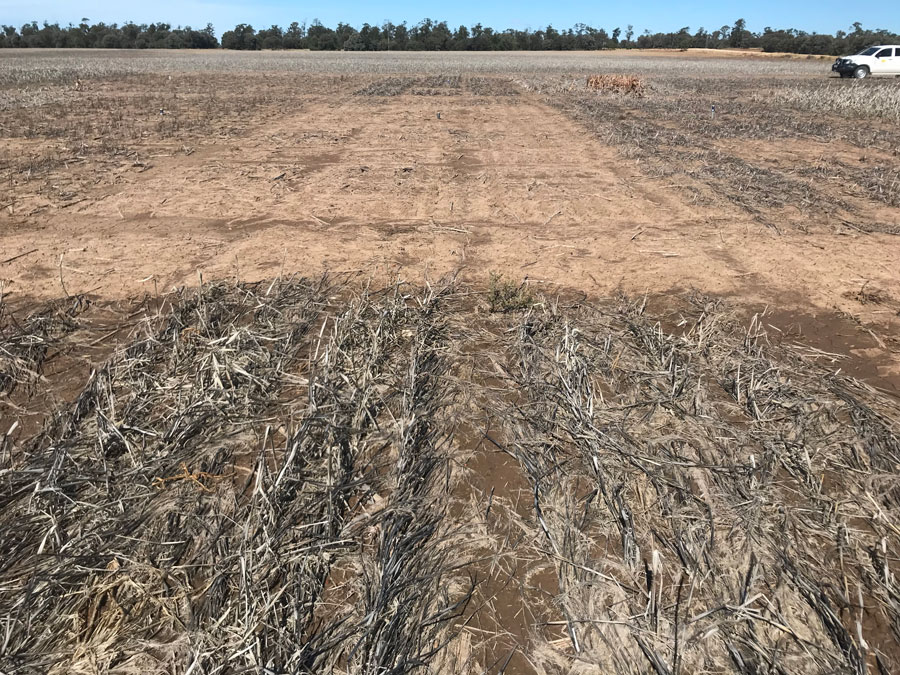 Wet soil (in the foreground) under late-sprayed millet compared to the bare control. This image was taken three days after 20 millimetres of rain fell at the Bungunya trial site. Photo: DAF

Modelling has shown that gains can be made in other seasons too, with work by CSIRO’s farming system researcher Neil Huth and agricultural systems modeller Brook Anderson calculating these benefits.

“Simulations of the Bungunya trial suggest we can expect similar or more water after a cover crop in 45 per cent to 70 per cent of years. This does depend on how long the cover crop is grown for. Simulations also highlighted the benefits in reducing erosion, with 50 to 95 per cent reduction in erosion in the wettest years.”

Mr Erbacher says there has been much grower interest in the work, especially last year when paddocks across Queensland and NSW ran low on ground cover.

“There is currently an opportunity for on-farm research working with growers to ‘fit and test’ cover crops on their own farm. There is also a lot of interest looking at the longer-term systems benefits of growing cover crops and the potential fit of grazed cover crops in mixed farming systems.”

Agronomist Stuart Thorn from MCA Agronomy in Goondiwindi, who works with clients who practice cover cropping, agrees. “Growers want to know how cover cropping will fit into their system and have a broader understanding of when it is suitable.

“It is a real fit for some situations, but not all. The costs associated with it, including management, seeds and attention to weed control, need to be balanced against potential gains.” He sees gains on undulating country where ground cover can stop soil erosion.

With final reports now being submitted, Mr Erbacher says the research team is buoyed by the dramatic results. “These yield responses are very large and represent big improvements in returns – far beyond what could be expected from the increases in net soil water storage across the fallows.

“I was sceptical of the concept as potentially ‘wasting water’, so I was quite surprised by our first results. The additive effect of everything that is happening at the site, such as improved fallow efficiency, better crop establishment and improved WUE, matches the scientific theories. So, I am convinced cover crops have a fit in low-cover situations.”

For growers considering cover crops, Mr Erbacher suggests talking it through with a local agronomist, and asking these questions: