Can linseed make a comeback in the western region?

Can linseed make a comeback in the western region?

WA trials suggest linseed may have potential as alternative break crop to canola in HRZ.

Increased consumer demand for health and wellness products could be an opportunity for Western Australian growers to introduce alternative break crops into their rotations.

Linseed (Linum usitatissimum) trials in WA's Great Southern region are analysing the value of the oilseed as an alternative break crop to canola.

Linseed is now known for being one of the richest sources of omega-3 essential fatty acids and is a common health food substitute for fish oil, particularly for vegetarians.

Agronomically, the linseed plant has similar requirements to both canola and cereals and can be planted and harvested with the same machinery.

Annual rainfall of 450 millimetres or above is required for optimal plant growth, while the crop is suitable for acidic soils and has a mild salinity tolerance.

Given that Australia often imports linseed to fill this health food niche, opportunities exist for WA growers to supply the domestic market. 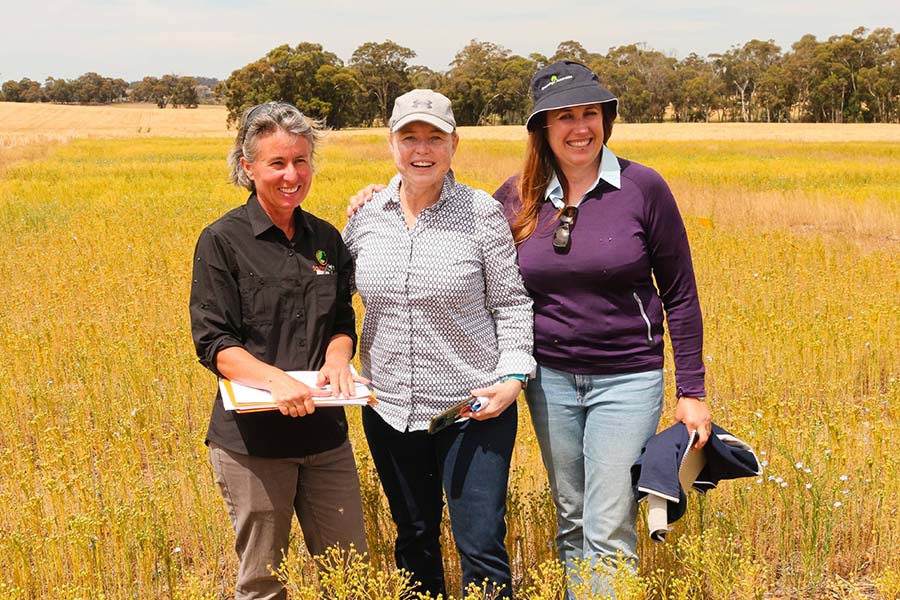 Kojonup-based grower group Southern Dirt is undertaking a major project to not only ascertain the opportunities to grow linseed, but also to package and sell the product to local retail outlets.

With GRDC investment, researcher Dr Bronwyn Copestake trialled linseed on properties in Darkan, Wagin and Kojonup throughout 2019 and early results suggest the oilseed could be a good fit for all three growing regions.

Dr Copestake says there is potential for linseed to be planted across large sections of the Great Southern region.

"The plant prefers loamy or clay soils rather than sandy soils and, while it doesn't particularly like to be under waterlogged conditions, it can stand being wet for a short period," she says.

Linseed has a shallow root system, so it requires regular winter rainfall. But Dr Copestake says a lower-than-average rainfall year in 2019 demonstrated the crop can handle a tough finish to the season.

"So far, we have been surprised at how well the crop went in 2019 given the drier-than-average conditions, particularly at the end of the season, and all the signs are very positive that this could be a viable alternative break crop for this region," she says.

Linseed, or flax as it is also commonly known, isn't new to WA's Great Southern region. It was grown in the Boyup Brook region after World War II to fill a global shortage for fibre.

In the early 1960s, growing linseed in Australia became unprofitable after cheap Russian linseed flooded the global market. As a result, WA growers quickly lost interest in linseed and turned their focus to other break crops.

Attempts to resurrect the crop in the 1970s and 1980s failed, with agronomic trials falling victim to pests such as Redlegged earth mites.

But with new pest control measures now available, interest in the alternative crop has again begun to increase, particularly as consumers realise the health benefits from both the seed and the oil. All commercially produced linseed is currently grown on the east coast.

Statistics from the Food and Agriculture Organisation of the United Nations suggest that opportunities may exist for increased linseed production in this country, with Australia being a net importer of the product for the past two decades.

Toowoomba-based PB Agrifood is one of the few domestic traders of linseed in Australia.

Director Peter Brodie says drought on the east coast has created an unprecedented shortage of domestically produced linseed - and 2019 was the first year the company imported linseed to meet long-term domestic contracts.

Mr Brodie says baking companies are one of the biggest buyers of domestically produced linseed, with the product used predominantly for seeded breads.

"Fifty years ago, linseed used to be a popular crop - grown for its oil content and used in oil-based paint products," Mr Brodie says.

"These days, it's more commonly used in the food industry and the domestic requirements are limited."

Mr Brodie says Australian manufacturers require about 10,000 tonnes of the seed each year.

"Prices for linseed can be up around $1000 ex-farm here on the east coast," he says.

While opportunities may exist in the future for Australian-produced linseed to be exported, most linseed currently produced in Australia remains here for domestic consumption. 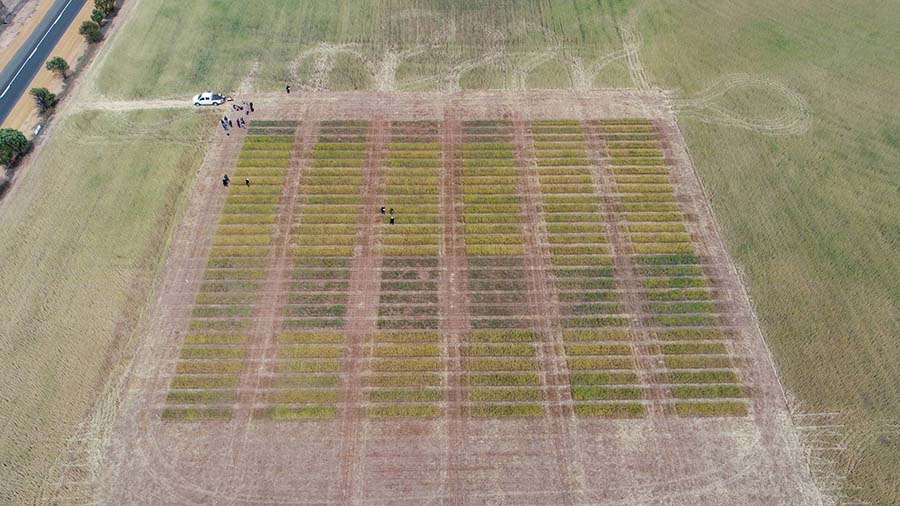 The two commercially available varieties of Glenelg and Croxton were trialled on the three different properties in Kojonup, Darkan and Wagin.

Each trial site contained three different times of sowing, beginning in May with 10 to 14 days between each time of sowing - plus three different seeding rates, of 35, 40 and 45 kilograms per hectare.

Three top-dressed urea nitrogen application rates were also trialled, at 40, 80 and 120kg/ha. At each time of sowing, 120kg/ha of Gusto Gold (NPK fertiliser) was banded below the seed. At each site, there were 162 different small plots.

Dr Copestake says the trials are highlighting the value of linseed in providing an alternative break crop to canola - and while the agronomic and machinery requirements appear to be similar, the disease break benefits are not.

She says linseed is resistant to two of the major Root lesion nematode species of Pratylenchus, P. thornei and P. neglectus (with P. neglectus being the most common nematode in WA's grain growing region).

Nutritionally, linseed doesn't appear to require any more applied nitrogen than a typical cereal or canola crop, but Dr Copestake says the crop may require extra zinc and sulphur.

"The next step is to run nitrogen timing trials to ascertain the impact of nitrogen applications on seed numbers and oil content," she says.

"In southern Queensland and northern NSW, linseed crops are yielding between one tonne per hectare and 1.5t/ha, while in Victoria common yields are around 1.25t/ha," Dr Copestake says.

"In Tasmania, dryland yields can be up to 2t/ha, while under irrigation growers are achieving 3t/ha."

In comparison, she says the WA trials are showing yields of between 0.57t/ha to 1.7t/ha in some of the trial plots.

"While these yields are very promising, we hope to better understand the agronomics behind growing profitable linseed as the trials continue," Dr Copestake says.

Another reason to consider linseed is the opportunity for weed control, particularly of grasses such as ryegrass, barley grass and brome grass.

"There are also a number of broadleaf herbicide options that are registered for use for linseed in Australia," Dr Copestake says.

Dr Copestake warns that growers need to be aware of certain challenges associated with a linseed crop.

The variety Glenelg is susceptible to Fusarium wilt, a fungus that invades the plant through the roots and causes severe wilting followed by rapid death of the plant.

"The fungus can live for a long time in the soil, so it is recommended that there is a three-year break between linseed crops in paddock rotations," she says.

"Croxton, which is a newer variety, has greater resistance to Fusarium wilt, and we are hoping to better understand the impact of these resistance levels from our trials."

In-season pest monitoring and control is also critical, as linseed is susceptible to a range of pests - such as Redlegged earth mite and heliothis (or native budworm) - just like canola. Dr Copestake says one - or possibly two - applications of pesticides will almost certainly be necessary to maintain control, particularly through the plant budding stage.

Linseed plants, flowers and seed can also be toxic to stock, so all grazing animals must be kept away from the crop before harvest.

"It is safe to graze the stubble after harvest, but it has little nutritional value other than being a fibre source," Dr Copestake says.

She says this is particularly important to note, given the crop will almost certainly be part of a mixed cropping and livestock rotation in higher-rainfall regions.

"The stalks of the dried plant are long and tough and may present a problem with some older harvesting machines," she says.

"In the past, linseed straw was windrowed or raked into windrows after harvest and then burnt. More recently, straw choppers on newer headers have been used to effectively chop and spread the straw."

Growing linseed as an alternative break crop appears to have many advantages. But for growers to consider the oilseed, there must be a market for the harvested seed and oil.

Given there is currently no commercial production of linseed in WA, Southern Dirt's chief executive officer Tracey Hodgkins says a market development program is a critical part of the linseed project.

With support from Western Australia's Grower Group Alliance, Ms Hodgkins is working closely with seed cleaners, oil crushing plants, brand developers and smaller grocery chains to ensure growers will have a place to sell the seed when production begins.

"Not only are we looking at domestic selling opportunities, but over the next few years we hope to develop export opportunities for the product as well," Ms Hodgkins says.

"In fact, we anticipate this export market will become our most important market in coming years."

A pre-feasibility study commissioned by Southern Dirt, and prepared by Strategy Matrix, suggests linseed can be viable in broadacre farms at all points where the yield achieves 0.95t/ha and where prices for premium, human-food-grade seed exceed $800.

Ms Hodgkins says yields from these early trials are giving the industry confidence that linseed can be a profitable and reliable crop for the Great Southern region.

"We believe this industry will be up and running, and very profitable, within five years," she says.