Pros and cons of deep ripping on an angle

Pros and cons of deep ripping on an angle

When done correctly, deep ripping busts up subsoil compaction, allowing better root and plant growth. Combining deep ripping with controlled-traffic farming (CTF) helps maintain the rip benefit and crop yield responses. However, always working in the same direction can present challenges of its own. Here’s a look at some pros and cons to ripping on an angle (cross-working) to seeding and to the previous rip.

Ripping, particularly below 500 millimetres, leaves the paddock soft. Seeding equipment can be harder to operate and prone to sinking and poor seeding depth control.

Ripping on an angle to the main traffic direction can help with trafficability. An angled rip leaves unbroken ridges between the ripping tynes, which provides seeder wheel support and helps equipment floatation when seeding. It is like facing waves caused by a ferry when you are in a dinghy. It is less rocky when going across the waves at an angle than facing them head-on or being parallel to them.

The degree of soil breakout (how much soil is busted up during ripping) influences trafficability. Narrower tyne spacings (less than 50 centimetres) or using winged tynes will break out more soil area (creating wider rip lines), meaning more chance of falling off unbroken ridges and into a ripped line.

When ripping in the same direction as the main traffic, if the machine drifts off the main tramlines the wheels can fall into the soft rip line and sink. At one demonstration in Three Springs, Western Australia, there was five to seven centimetres less wheel sinkage when cross-ripping compared to working in the same direction. In another case where the seeder followed the rip line, the seeder’s centre-section wheel ran on top of a rip line while the wing wheel was between rip lines, which caused the section to sink.

Ripping on an angle to the previous rip shatters more subsoil. This is because you are busting up tramlines as well as the unbroken soil between the last rip line.

With better trafficability you can also get better seeding depth control, which improves emergence.

Implementing CTF and sticking to your tramlines helps preserve the rip and reduces fuel use by running on compacted wheel tracks. But over time the tramlines can become deeper or rutted and eventually need renovating. Ripping on an angle crosses the tramlines, providing some degree of renovation by dragging soil to fill in the trenches. In the long term, you might need to use a dedicated tramline renovator to fill in ruts and keep the tramlines more level with the paddock.

Rutted tracks are more common on heavier soils. Sandy soils tend to end up with deep wheel tracks after renovation because:

Some CTF farmers on sandy soils who are not fully matched are also getting wide (80cm to one-metre) tramlines. Because tramline renovators are not currently designed to work this wide, cross-ripping drags soil back into the tramlines.

Buying time in the budget

Cross-ripping is a short-term compromise to save on buying new equipment – for example, a tramline renovator (as well as labour, as you are not doing additional work), or a seeder better-suited to soft soil.

Wear, tear and fuel use

There is more wear and tear on machinery, and more fuel use, especially when ripping in tough/dry conditions. This is because you have ripped up the firm wheel tracks and the machinery has to work harder across the paddock.

Working on an angle can also mean a bumpy ride for operators, especially if you have used inclusion plates and/or have not used a roller. The larger the angle you work at, and the rougher the surface after ripping, the bumpier the ride.  Some growers have found they need to slow down when harvesting short crops to minimise the front ‘rocking’ as the machine crosses the rip lines at an angle.

Busting up tramlines can mean less in-crop access to the paddock in unfavourable conditions. 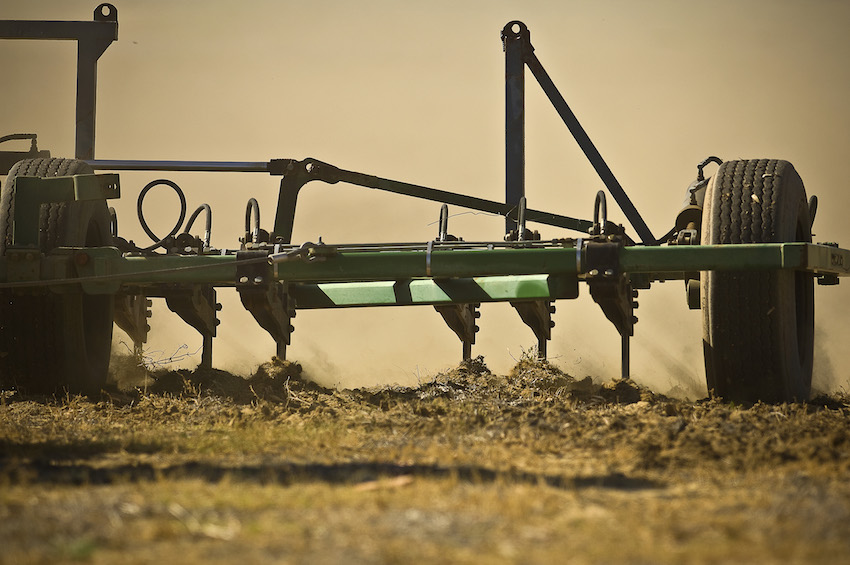 How much of an angle?

While there are no hard rules regarding which angle to rip at, between five and 20 degrees is most common. Note that while you will probably get better trafficability, some tramline renovation and subsoil shatter as the angle increases, you will also increase the trafficked area in the paddock. Working at 90 degrees is too rough and does too much damage to machinery.

Seeding on an angle to the main traffic direction (and rip) is less ideal. Cross-seeding carries a greater risk of compaction as the soil is usually moist at seeding and the tractor and air-cart are heavy. Cross-seeding almost doubles the percentage of the paddock area that is wheeled in one season. However, the type of seeder will influence cross-seeding decisions. Seeders that carry the weight of the bar on their press wheels can bulldoze the soil after ripping. Some growers find that heavier seeders do better on an angle as there is less bulldozing.

If you are cross-working, rip on an angle, rather than seeding on an angle, so you can stick to your tramlines for most operations and minimise falling off the tramline into a parallel ripped line.

Cross-working is probably best considered as a short-term compromise while you work towards a fully matched CTF system.

This article was produced as part of the GRDC ‘Maintain the longevity of soils constraints investments and increase grower adoption through extension – western region’ investment (PLT1909-001SAX). This project is extending practical findings to grain growers from the five-year ‘Soil Constraints – West’ suite of projects, conducted by the Department of Primary Industries and Regional Development, with GRDC investment.