What was instigated by a dramatic event has become an ongoing – and much more strategic – program to improve a sandplain cropping system.

Up to the early 2000s, Peter Luberda had worked cautiously at changing practices to manage non-wetting deep sands and sand-over-clay on the property he farms with his parents John and Frances near Esperance in Western Australia.

But an electricity pole fire that swept through the back of the home block in 2004 forced his hand and he had to act fast to save the fire-denuded topsoil.

“We had (previously) tried various soaker products to deal with non-wetting issues, but found they had mixed success so we had begun to experiment cautiously with clay spreading in 2000,” Peter says.

“We focused initially on country that had been cleared of banksias and was severely water repellent in the top 10 centimetres and contained less than one per cent organic carbon.

“Weed control was a big issue in these soils, as crop germination was often staggered and patchy. However, when the fire struck, we had to refocus and act fast by recruiting a contract clay spreader, as the affected paddock was denuded and we were going to lose valuable topsoil to erosion.”

So began Peter’s foray into serious and more-strategic clay spreading.

A Muresk Institute graduate and teacher by training, Peter has a healthy appreciation of what history and experience can teach.

We can learn so much from others’ experience.

In 2011, he was one of eight growers from around Australia who shared knowledge on their respective soil amelioration practices for the publication Spread, delve, spade, invert: a best practice guide to the addition of clay to sandy soils. Delving is not feasible on the Luberdas’ property as the clay is too deep.

“Clay spreading is like dealing with a Pandora’s box,” Peter said back then. “There is no going back once you have spread clay and you may expose some unforeseen consequences.”

Ten years on, with plenty of clay spreading experience under his belt, he still adheres to this perspective. He has learnt much and his thinking has become more holistic, now considering clay spreading operations in a broader context.

By 2011, Peter had clay-spread 300 hectares and since then he has ameliorated another 370ha.

“Clay spreading is a slow operation, usually undertaken at about two to eight hectares per day, and it can be punishing on machinery and yourself over time.”

Clay spreading is only economical if suitable clay can be sourced on-farm and pits are now scattered around the Luberdas’ blocks. Suitable clay is found at depths from 90 centimetres to 5.5 metres on the property and usually at the lowest points in the landscape.

“The best clay is the closet clay to the area you are treating,” says Peter.

“Testing the clay can also give an indication of what other nutrients should be applied after clay spreading”.

The local Department of Primary Industries and Regional Development staff can assist with this and Peter has been working closely with David Hall from the Esperance office to support his decision making over the years, particularly in determining spreading rates.

The small pit areas created by extraction represent areas lost to production but they are improving the surrounding cropland. They are not filled in after the clay has been extracted as it wastes valuable soil.

“So, siting of pits in paddocks becomes an issue as we can’t be continually dodging pits as we tend to crops.” This means the pits are often sited near fencelines to ‘quarantine’ them from cropping areas.

Peter has also learnt from years of extracting and spreading clay that it needs to be done slowly and with care.

“Contractors consider it only economical to spread clay in a 400m radius from a pit, but for owner-operators the decision is made according to their situation, depending on where the clay occurs on the farm.”

The clay Peter uses is predominantly kaolinite and the source material is 30 to 40 per cent clay content. He applies it at a rate of between 200 and 300t/ha.

The overburden from excavating the pits needs to be carefully removed and he says it is good practice to separate any sand from gravel, which can have other uses later.

“The banks need to be tapered to be stable and the clay may need to be worked to make it finer for extraction. If the clay comes out in lumps this makes for spreading problems.”

Pit banks require some consideration as large walls can harbour weeds, which can pose management issues.

“Bank size is a trade-off between being low enough so we can run a boomspray across it, but also provide some safety to run sheep,” Peter says.

“If you use contractors, you need to ensure they pay attention to detail when clay spreading and work slowly, as lumps or missed areas will pose future problems.

“Incorporating the clay is a vital part of the operation and we learnt from mistakes. To begin with, we smudged the clay with a railway girder.

Leaving it on the surface is a disaster as it can set hard in the sun and then water will pool or run off it. We learnt that we needed to spade to a depth of 25 to 45cm.

This practice has been maintained and it also gives the opportunity to incorporate either lime or gypsum at depth.

“It gives us a real headstart to alter pH through the profile, which improves the nutrient efficiency of our crops and can last for years.”

Burying lime at depth also denies it to conical snails that might use lime closer to the surface for shell production.

“Conical snails have become more of a problem as we have produced increasingly more successful crops and we need to look for ways to reduce their build-up.”

Back in 2011, Peter said that mixing the clay material through the profile is like adding a “blotting agent” which absorbs nutrients that had previously leached through the sandy profile – and he still uses this analogy.

In that year, he saw his cereal yield increase from 2.4t/ha to 4.6t/ha, a level that has been sustained over the years. He has only re-clayed one area, which was under-clayed in the first instance. 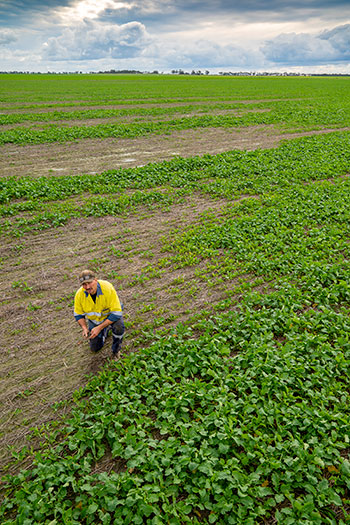 “There are many things at play with these yield improvements,” Peter says.

“A key factor is the big improvement in plant germination and establishment: the ability to get crops out of the ground faster to get canopy closure faster and a jump on any weeds.

Although in 2011 Peter was watching the development of electromagnetic mapping and gamma radiometrics to map soil constraints, he has not yet ventured into their use.

“An excess of data that you are not entirely sure how to interpret can confuse decision-making, and I can still diagnose issues visually and make gains at this point.”

He still uses a drill rig to identify areas that have suitable and accessible clay for spreading and continues to spread clay with a carry grader.

In 2010 Peter bought a second-hand carry grader with a capacity of 15 tonnes. It is hauled by a 410-horsepower Caterpillar tractor to try to reduce compaction.

“I’m considering trialling a Nufab spreader on land that has proved harder to clay spread as it is too shallow for incorporation at depth.”

He still uses the Farmax spader that he bought in 2010, partly due to the ease of replacing worn parts, which he has had to do frequently as the sandy-clay mixture it incorporates is abrasive.

Ever on the watch for new equipment that may improve the clay spreading process, a new addition to his toolkit is a Rotercon Leveller, which does a better job levelling spread clay than the railway girder.

Peter says clay spreading has become an important means of drought-proofing his farm and he will continue the practice.

We are lucky to get the rainfall we do in this area, but it is important that we use it effectively and hang on to the moisture for as long as possible. The blotting agent – clay – that we incorporate is critical to this.

The clay pits also trap water that previously may have run off the land and Peter has installed sumps in some to enable him to pump the water on to surrounding land.

Further down the track, he may consider deep ripping to break hard pans in some paddocks “to make a bigger sponge”.

“These hard pans may have occurred due to the passage of heavy equipment or stock or simply with the passage of time, but they restrict productivity improvements.”

Continuing his whole-farm improvement strategy, Peter says one serious issue to reconsider is the introduction of blue gums to the property in 2010.

“These trees were a bit of a local trend promoted by a Landcare initiative at the time and plantings on our property were done without consideration of the future soil improvement needs. However, they are often in large clumps in the wrong place in the landscape to enable clay spreading.”

He adds that as an introduced species they also steal soil moisture and nutrients and, being allelopathic, there is little pasture or crop growth below them.

“Deciduous species or deciduous fodder crops placed on water courses or around pits may be a better bet,” he says.

A new guide is available from the GRDC website to help tackle amelioration of variable soil types, which integrates current best practice and case studies.

Paddocks with multiple soil constraints and variable soil types are tricky and time-consuming to manage. Where there is limited time, budget or available machinery, or there is just too much variability, paddocks can still be ameliorated using the best compromises of operations, machinery, inputs and management. This guide provides a step-by-step process to address these situations.