Ian Hastings was overwhelmed by a wall of flames while fighting a header paddock fire on his family’s property at Ouyen, Victoria, during harvest last year.
Photo: Cathie Hastings

Warning: The images depicting Ian Hasting’s facial injuries in this story and video may cause distress. Ian and GRDC felt this image clearly illustrated the importance of on-farm safety and having the right equipment at hand should an emergency arise.

Ian survived a paddock fire sparked by his Class 8 header during the 2019-20 harvest. It was a serious accident that showed even the best-laid safety plans can fail.

The Hastings family – Ian, Cathie, Michael and Megan – crop about 4600 hectares with mainly wheat, barley, lupins and vetch at Ouyen in north-western Victoria.

There, in the fire-prone cropping region, what looked like an innocuous blaze in a barley crop flared up without warning and engulfed Ian in flames, inflicting serious burns on his hands, face and knees. His hands required skin grafts.

In the lead-up to harvest last year, Ian says he felt confident that the farming team was prepared to respond to a header fire emergency.

The source of his confidence was their on-farm approach to header fire management – safety equipment and protocols – that went beyond conventional paddock fire preparedness on many properties across the country.

Highlighting the rigour of the family’s system, the driver of the tractor-towed chaser bin tests a 1200-litre Honda fire-fighting unit “every morning” of the four-to-six-week harvest period to make sure it is working. 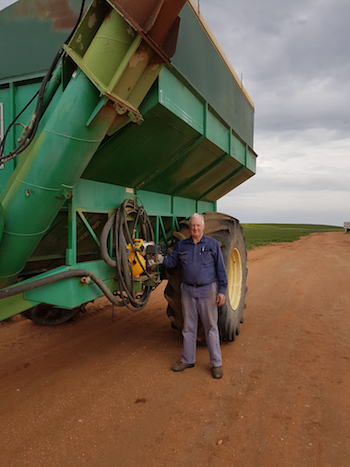 The fire-fighting unit was also custom-fitted to the farm’s 17-tonne Finch chaser bin. Ian and Michael retrofitted two frames to the chaser bin – one to mount the water tank on the machine front above the power take-off shaft and another to support the pump and hose on the side of the chassis in front of the wheel.

With these safety measures in place, Ian says, “We thought we were well-prepared for a header paddock fire, ready to go. But we found that we just weren’t, and that the system we had in place was not adequate.

“It really does take an incident to realise how effective your equipment is, and to test your preparedness.”

Ian says the fire across about 10ha of the paddock exposed critical pitfalls and highlighted vital protective measures that have led to a rethink of the farm’s header fire management system.

Ian hopes that sharing his experience, including the revised approach to fire safety it has prompted, might help other growers avoid the peril and injuries he faced during last year’s harvest.

The most important lesson that emerged from the incident on 12 November was the imperative of protecting people from direct exposure to flames, he says.

Ian reflected on how this could be achieved while he was being treated for burn injuries over a 10-day period at The Alfred Hospital’s Victorian Adult Burns Service in Melbourne, and there he came up with some solutions.

He resolved to further modify the fire-fighting equipment and chaser bin so a fire could be fought from the safety of the tractor cabin, instead of standing in the paddock.

The farm’s established set-up requires an operator to leave the cabin (of the tractor or header) to activate the motor that powers the high-pressure water pump attached to the chaser bin.

The arrangement also requires an operator to leave the cabin to approach and fight the fire in the paddock using a hose attached to the side of the chaser bin.

It was at this stage in responding to the fire that Ian sustained his serious burns. He says a sudden change in wind direction and intensity transformed low, creeping flames into a rapidly advancing fire front. 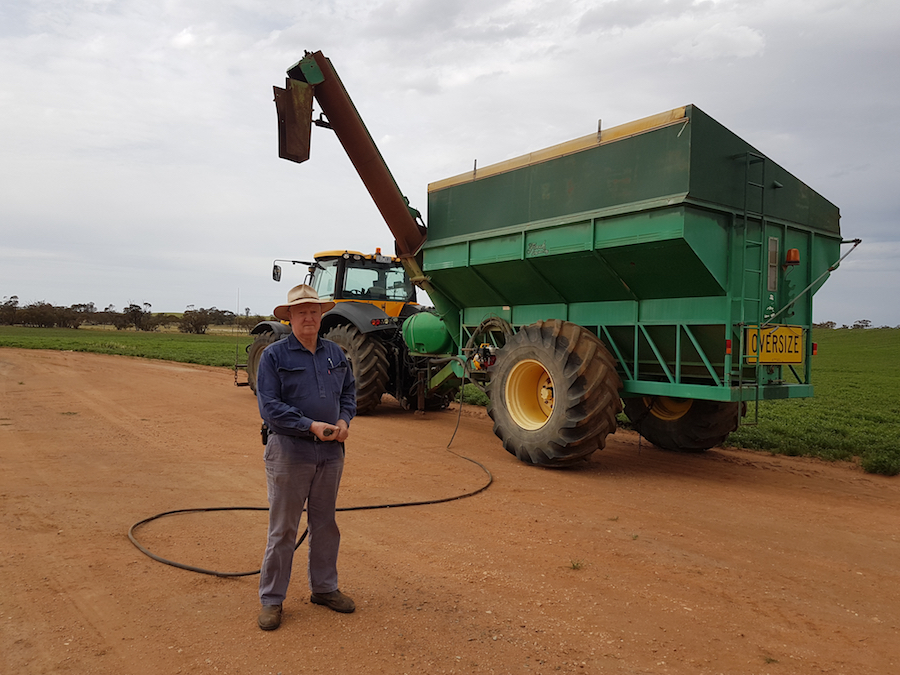 Ian Hastings has devised a new system to enable fire-fighting from the safety of the tractor cabin, instead of standing in the paddock. Photo: Cathie Hastings

“I grabbed the fire-fighting hose and headed over to the fire, which was only about six inches high and moving slowly,” Ian says.

“But when I turned the nozzle on to release the water, I realised the pump motor was only idling, so I turned and ran back about 10 metres to the chaser bin.

“It took me about 4.5 seconds to run to the chaser bin and rev the throttle, and when I turned to run back to the fire with the hose … 2m-high flames came over me.

"I fell on the ground with the flames around me … I had the momentary thought: this might be the end of the game."

To avoid this exposure risk in the future, the Hastings plan to invest about $3500 in a new hydraulically driven high-pressure water pump.

Ian says the hydraulic pump would allow the chaser bin driver to simply flick a switch – a hydraulic lever – inside the cabin to activate the fire-fighting hose.

They plan to reconfigure the position of the fire-fighting hose. Instead of having it coiled on hooks near the pump, the hose will be threaded from the chaser bin to the tractor, with the nozzle attached to the front mudguard on the right-hand side of the tractor.

The tractor cabin will also be fitted with electric linear actuators to remotely control the nozzle direction – one actuator to manoeuvre the nozzle up and down and the other to manoeuvre it side-to-side.

The idea is that we can control the hose’s water stream from inside the tractor without having to expose anybody to fire injury outside the cabin in the paddock.

“The system would allow the operator to drive straight to the fire and simply flick a hydraulic lever and adjust the hose nozzle with the actuators.” 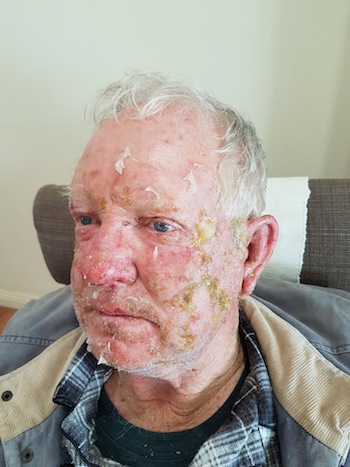 Ian has recovered from the burn injuries on his face and knees without scarring. Photo: Cathie Hastings

He says another lesson, closely linked to the pattern of his burn injuries, was the vital importance of fire-retardant clothing.

Ian says most of his body, aside from his face, hands and knees, was protected from burns by the heavy-duty cotton drill clothing he was wearing.

The stout cotton fabric completely covered his legs, but the fire still managed to seriously burn the skin on his knees (through the fabric) because he fell heavily on them in the fire.

Remarkably, however, the fabric covering his knees was not even scorched, which testifies to its fire resistance, he says.

In contrast with the protective cotton clothing worn by Ian, the chaser bin driver, Thomas Hansen, was wearing a high-visibility, long-sleeve shirt made from flammable polyester fabric.

Fortunately, Thomas remained in the tractor cabin until the fire passed.

“Thomas considered getting out of the tractor cabin to help me. He could have been killed if the polyester burnt onto his body.”

As a consequence of these findings, the Hastings have banned polyester clothing and insist on head-to-toe cotton drill clothing during harvest operations.

Despite the seriousness of his injuries, Ian recovered from the burns on his face and knees without scarring.

Ian was president of the Victorian Farmers Federation (VFF) Grains Group from 2003–2007, vice-president of the former peak body for grain growers, Grains Council of Australia, and he is a former chair of the Mallee Sustainable Farming grower group. Ian is also a life member of the VFF, and served on its board and economics committee.

Fires are a real risk on grain farms in Australia. Ahead of harvest, make sure you reduce the risk of a header fire by cleaning crop residue, checking all electrical lines and having fire fighting gear close by. #farmsafetyweek https://t.co/RI8BlO7EqT 👈 Full vid with Ben. pic.twitter.com/yBntpGnlo1