Regular monitoring and recording of grain in storage will help detect any problems early and allow issues to be managed before significant grain damage occurs.
Photo: GRDC

"If you do anything this year with storage, do this," he says.

Mr Burrill, a senior development agronomist at the Queensland Department of Agriculture and Fisheries (QDAF), says January and February are the worst months for incidence of storage pests.

"It is when we get a lot of calls. But by regular monitoring and recording for both bulk grain and stored planting seed, growers can get on top of this."

Each month, three key aspects should be looked at:

Temperature has a huge impact on grain quality and insect numbers. With cooler grain conditions - made possible via aeration - insect pest numbers are reduced and grain quality maintained.

Mr Burrill suggests checking quality by looking at and smelling the grain.

"If there is a problem, you can often smell it or see it when looking in from the top of the silo," he says.

The tools need to monitor insects and grain temperature include: 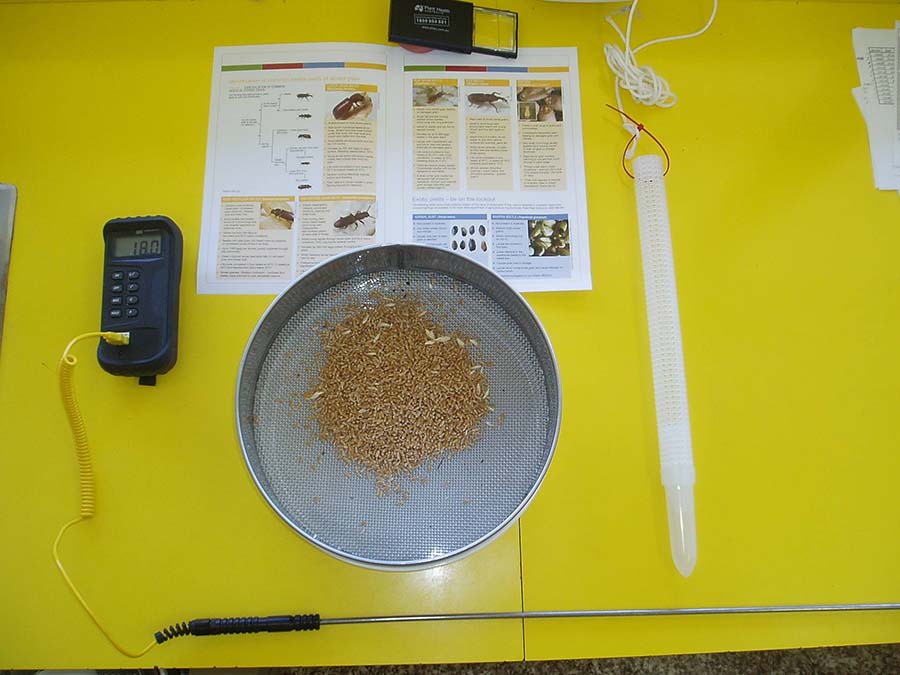 The insect sieve is an essential tool to check for pests. Two of Australia's most common and serious pests, the lesser grain borer and flat grain beetle (also known as rusty grain beetle), tend to hide in grain and can be difficult to detect.

"The only reliable way to know you have them is to sieve the grain," Mr Burrill says.

He suggests taking a grain sample from the base of the silo and the top surface of the grain, if it is safe to do so. Take about one-third of a bucket from both locations, sieve the grain, then walk out into the sunlight to look for insects in the sieve base pan.

The next steps are to identify the insects, using the GRDC back pocket guide, and record what is found for each silo checked.

"Once you've used the guide and watched the movement of the various insect species in the sieve pan a few times, you get used to identifying the insects quickly," Mr Burrill says.

Correct identification is important. For example, he says, if you did a good silo fumigation with phosphine but still found flat grain beetles surviving, you may have found a resistant strain.

"Send us insect samples to check in the lab, because there is a strain of this beetle that is strongly resistant to phosphine, so it may require the use of a different fumigation gas such as ProFume®," he says.

Because it can be difficult to detect insects in grain when they are in low numbers, using insect probe traps (along with monthly grain sieving) is best for a thorough insect pest check. Storage pests are commonly found in grain at the top of a silo or grain shed.

Insert one or more insect probe traps (about 45 centimetres long) into the grain surface. The grain peak at the top of the silo or the grain ridge peak in the grain shed are ideal locations for trapping pests. Traps remain in the grain, trapping insects as they move through grain.

Mr Burrill suggests inspecting the trap catch each month when grain sieving. Cords and markers should be attached to the traps so they are not lost or forgotten.

This checks whether the silo aeration system is doing its job and helps to better understand storage conditions for maintaining grain quality and reducing insect pest numbers.

"Flour beetles, for example, are breeding flat-out at 28°C to 30°C, but are stopped or slowed down when grain is cooled to around 20°C to 23°C," Mr Burrill says.

"The closer you can get to reducing grain temperatures to 20°C and below the better."

It is important to aim for grain temperatures of less than 23°C in summer months and less than 15°C in winter, which is "realistic, if aeration is designed and managed well".

Monitoring and recording insects, temperature and quality are important in a business sense, Mr Burrill says.

"If a buyer calls looking for 500 tonnes of wheat and you can go to your storage records and confirm the variety, screenings, protein, moisture content, plus say when it was last fumigated and results of the most recent pest inspection, it helps build your reputation," he says.

"On the other hand, if you have to say: 'hold on, I'll go and check the silo and get back to you' and then find a lot of insects or other issues, those buyers are less likely to make you their first point of contact next time.

"Regular monitoring means problems are detected early and can be managed before significant grain damage occurs.

"It also avoids surprises at out-loading, prevents costly rejections from grain buyers and maintains your reputation for supplying quality grain."

A new R&D innovation challenge for the grains industry is to develop an effective, robust method for monitoring grain stored in large flat-bottomed silos - those that store 600 to 1500 tonnes-plus of grain.

"These large silos are now common for many on-farm storage facilities in Australia," Mr Burrill says.

Due to their size and design, it is currently difficult to sample grain or use probe traps to carry out regular checks for storage pests, he says.

Another valuable innovation would be to incorporate a system for measuring gas levels at various internal locations during silo fumigations.