The GRDC Southern Pulse Extension project was established to help growers maximise income from pulses. GroundCover™ spoke to some of the people involved in the project about its outcomes.

Some risks – changing rainfall patterns, variable soil types and extreme weather events such as frost and heat – cannot be controlled, so South Australian grower Andrew Hansen focuses on those that he can. These include weeds such as wild radish.

Wild radish was one of the reasons pulses were dropped off the rotation: “You can spend a lot of money in the cereal part of the rotation not allowing radish to set seed and then you grow a pulse and it just blows the seedbank out of the water again and you’re back to square one,” Andrew says.

Andrew runs the family’s mixed farming enterprise, Hansen Farms, at Coomandook in SA’s Coorong region with his wife Joanne, brother Garry and five employees, who include sons Daniel and Nathan.

He says the wild radish problem turned a lot of people away from growing pulses in the region, but that is now changing due to new chemistry and new techniques: “I wouldn’t say we’re on top of radish or controlling radish in pulses, but we’re doing a better job than we used to,” he says.

Andrew says they diligently spray herbicide under the windrow before cutting hay and then target wild radish again once the crop is baled.

“When we’re windrowing canola, we also spray under the windrows, so basically we just try any means possible not to let the radish set seed,” he says. “We try to draw that seedbank right down.” 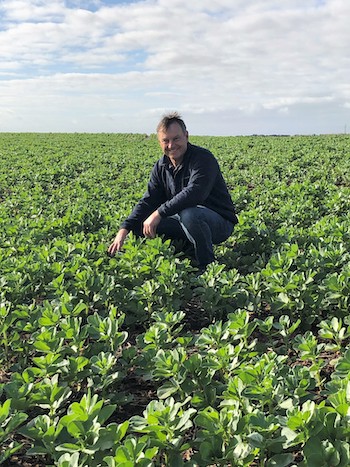 Andrew says a better understanding of herbicide resistance and access to new chemicals, including the Group C Terbyne, containing the active ingredient terbuthylazine, have helped in the face of growing resistance to Group B and Group I herbicides.

“It’s definitely worse on that water-repellent grey sand and where we’ve grown a lot of lupins in the past,” he says. “Once upon a time we could use a product called Eclipse (metosulam Group B) but radish is now highly resistant to it.”

Timing is crucial. Based on a combination of crop stage and weed stage, Andrew aims to target weeds at the 2-to-4-leaf stage with a pre-seeding knockdown of glyphosate and a Group G spike, followed by pre-emergent Terbyne at full label rates. There are few options available for in-crop broadleaf weed control in faba beans, but a diflufenican-metribuzin mix works in lupins.

Andrew is confident that rotating modes of action in combination with using non-chemical methods of managing weeds, such as increasing crop density, cutting hay, grazing, chaff lining and windrow burning will help keep the wild radish in check.

Like many farmers, he is also closely watching the evolution of machines that can be mounted on headers to catch and crush weed seeds at harvest. “Hopefully, they can get the bugs out of the technology and maybe one day we’ll use it,” he says.

“They are trying to get the mills to last long enough, making them reliable enough and not cause overheating problems. The principle is good, it just needs to be refined a bit more.”

The family’s farming business is now predominantly cropping, but it continues to run cattle and sheep on permanent lucerne pastures over about 20 per cent of the farm that is unsuitable for cropping.

“Going into 2019 we recorded 7mm from the middle of December to the start of May, but then we had a reasonable growing season,” he says. “It doesn’t seem to be following any trends. No two years are the same.”

As well as cereals for grain and hay, the 2019 crop program included canola, lupins and faba beans.

Andrew says lupins have traditionally been grown in the area because of the grey sandy soils, much of which tends to be non-wetting in nature. Other legume types have had a chequered history. Field peas were popular about 15 to 20 years ago but “went by the wayside” because of frost and snails, and lentil varieties available at the time proved too short to be suitable for stony country.

Hansen Farms has been no-till since the mid-1990s and maintaining adequate ground cover has been an important element, especially on the lighter soils. It has moved to a paired row system to try to reduce row spacings.

Because we are new back into pulses, lots of things have changed or improved.

Andrew says improved crop competition has helped with wild radish management, as well as brome grass, ryegrass and other in-crop weeds. They windrow-burned the whole farm at least once but are reluctant to do it too often because reducing stubble makes paddocks more vulnerable to wind erosion.

The Coomandook Pulse Check discussion group established in 2017 as part of the GRDC Southern Pulse Extension Project came along at the perfect time for the Hansens.

“Because we are new back into pulses, lots of things have changed or improved,” Andrew says. “There’s a lot to do with nutrition management, fungicide management and insect management, so it’s been really good to learn about that.”

He says they reduced the area sown to lupins by up to 50 per cent for three or four years when wild radish control became too much of a struggle on the sandy soils. At the same time as herbicide resistance was “starting to raise its head”, sheep were brought back into the enterprise.

“Livestock has been an important part of managing radish,” he says. “If we get a paddock that starts blowing out, we’ll sow it with sheep feed like a barley-vetch mix, graze it with livestock and – before anything sets seed – we will terminate it. That gives us a legume and a break that we can use on those sandier soils.”

As well as helping reduce the risk of herbicide resistance, Andrew says livestock provide a hedge against another major risk: increasingly frequent and severe frost.

He attributes the rise in frost damage to changing management practices, such as: farmers becoming better at identifying frost damage; earlier sown crops; and stubble retention.

“On those sandy soils we’ve been no-tilling for more than 25 years, the standing stubble is insulating the soil so it’s not heating up as much during the day,” he says. “Then it can’t give off heat in the evening or at night, so the insulation effect is making those soil types more susceptible to frost. Also, 20 years ago we weren’t growing canola and it is more susceptible to frost. We were running more sheep back then and sheep tend to be frost tolerant.”