Dr Nuttall says the new legume portfolio is likely to include a range of summer crop options, as well as some winter crop alternatives.

The main aim of the research is to provide options for summer cropping across southern Australia, where pulse production is dominated by winter legume crops: lentil, chickpea, field pea, faba bean and vetch. “Our goal is to identify legume species, particularly opportunistic summer cropping options for both grain and fodder to increase enterprise options for growers,” Dr Nuttall says.

Trials initiated in 2019 are working to integrate these gains into southern farming systems.

Over the 2019-20 summer, 32 alternative legume species, including a range of varieties, were road-tested in different agro-ecological regions in Victoria’s low, medium and high-rainfall zones. Each agro-ecological area is characterised by a distinctive combination of features, such as farming systems, soil types and environmental conditions.

“Many of these legume species are traditionally grown in subtropical regions, so determining their suitability to the rainfall patterns, photoperiods (day length) and temperatures across southern Australia is an important objective,” Dr Nuttall says.

Trials during the 2019 and 2020 winter growing seasons also tested the performance of winter legume crop species, such as fenugreek, messina, serradella and narbon bean.

Dr Nuttall says early findings of the trials have helped build a “traffic light system” indicating which summer crops may be suited to particular growing environments across Victoria.

“The summer trials showed the growth of legume crop species was highly variable between agro-ecological regions, highlighting their suitability for different growing areas in Victoria.”

For example, summer crops reached physiological maturity earlier at Ouyen in the Mallee during February and March, but matured later at Horsham in the Wimmera during March, and at Hamilton in the Southern Grampians during April.

“This demonstrated the influence of thermal time and potentially water stress on the rate of crop development, particularly the number of days to physiological maturity,” Dr Nuttall says.

“The variation in species phenology and, in turn, growing season length has implications for the timing and system fit of summer legumes within crop rotations.” Mungbeans growing at Horsham, Victoria, in trials during the 2019-20 summer. Photo: Agriculture Victoria

Parallel to the trials examining commercial cultivars for different crop species are extensive screening trials testing a broad range of germplasm collected from around the globe. These genetic lines or landraces (old, locally adapted grower varieties) were sourced via the Australian Grains Genebank (AGG) at Horsham.

Landrace selection for the genetic trials was based on traits that might be suited to southern growing conditions. For instance, researchers aimed to match the growing conditions where the landraces grow overseas with those in southern Australia.

Of these plant lines, about two-thirds showed potential to double the yield of their commercial variety counterparts when grown in Victoria, Dr Nuttall says. The research team continued to examine the performance of both landraces and commercial cultivars in trials during the 2020-21 summer. He says the current trial program has a more nuanced focus on agronomy, shaped by baseline information gleaned from earlier trials, such as growing season length, susceptibility to pests and disease, and yield potential.

These rain episodes, especially during the summer planting window from October to December, can be the main trigger for planting a summer legume as an opportunity crop.

“The different water regimes will indicate how much rain is required for the various legume species, as well as their adaptation to episodic rainfall in late spring and summer,” Dr Nuttall says. 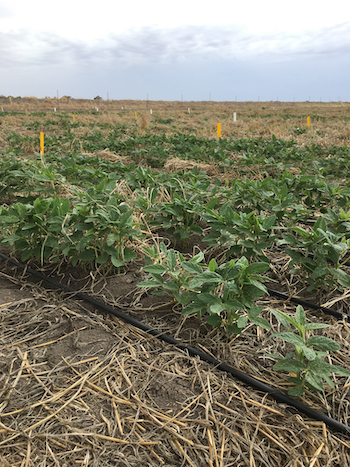 Researchers at Agriculture Victoria have tested the performance of 11 summer cropping options, such as these soybeans growing at Horsham in the 2019-20 summer. Photo: Agriculture Victroria

A third on-farm component of the trial program in the 2020-21 summer growing season is assessing alternative legume species, such as mungbean, soybean, navy bean and some Phaseolus crop species, in paddock strip trials on Victorian properties.

This part of the project, largely driven by significant grower interest, is allowing scientists to gauge the logistics and efficacy of agronomic management practices on a paddock scale, he says.

Biophysical modelling is another focus of the project in which researchers are examining the probability of producing a successful summer crop in different seasonal conditions.

For instance, crop modelling based on the past 100 years of weather patterns for different regions in Victoria can help determine the probability of receiving enough rain to plant a summer legume as an opportunity crop in late spring or early summer.

To this end, the research team is analysing the likelihood of receiving 30mm of rain over a three-day period, as well as subsequent rains, during summer.