Erratic profitability and changing rainfall patterns are just two of the factors that make cropping in the low-rainfall zone (LRZ) of Western Australia challenging.

However, a four-year project that has combined experimentation with modelling and economic evaluation is set to deliver new tools for growers in the LRZ to deal with these challenges.

CSIRO farming systems scientist Dr Andrew Fletcher, who leads the GRDC-supported project, says the key to success will be adopting these tools with a changed mindset that views farming systems in both a longer and wider framework.

“Terminal drought and heat stress during grain filling are also common. Growers have adopted cereal-dominant, risk-averse approaches with low use of inputs such as fertiliser.

“Crop productivity improvements for this zone may require a change of risk appetite. To address this, we have been reconsidering fallow as a soil moisture management technique for this zone, together with new early sowing options and high-value break crops (such as) field peas, lentils, chickpeas and lupins.

“But, more importantly, we have considered the performance and economics of combinations of these practices over longer-term timeframes to consider how they can be optimised to improve grower returns.”

Trial results at both Merredin and Hyden over four years demonstrated the importance of including break crops and fallow to improve yield and protein content of wheat.

“Break crops also increased protein content of wheat, including a number of effects that persisted longer than one year. Legume pasture, in particular, gave a boost in grain protein,” Dr Fletcher says.

At Hyden there was a 0.45t/ha increase in 2020 wheat yield in a fallow/wheat/fallow/wheat rotation compared to a continuous wheat (see Table 1).

“To consider how best to optimise crop sequences, it was crucial to consider the economics of each combination and we were able to do this using a unique industry dataset,” Dr Fletcher says.

Economic modelling using this data demonstrated that including break crops can increase profitability of rotations in the LRZ due to increased wheat yields, lower input costs and diversification of income, especially in poor seasons, which also helped to reduce risk.

Long fallowing over winter was once a common practice in LRZ areas of WA, where rainfall is the main factor limiting plant production. However, as crop management improved and profitable break crops became available in the 1980s, the importance of fallowing declined. But, since then, this region has experienced a progressive decline in rainfall. As the regional climate dries further, fallowing is receiving renewed attention from LRZ growers and could provide an alternative risk management option.

Simulation modelling carried out by Dr Chao Chen, a member of the CSIRO team, has showed that fallow could increase wheat yields and profitability of the copping systems in the LRZ. 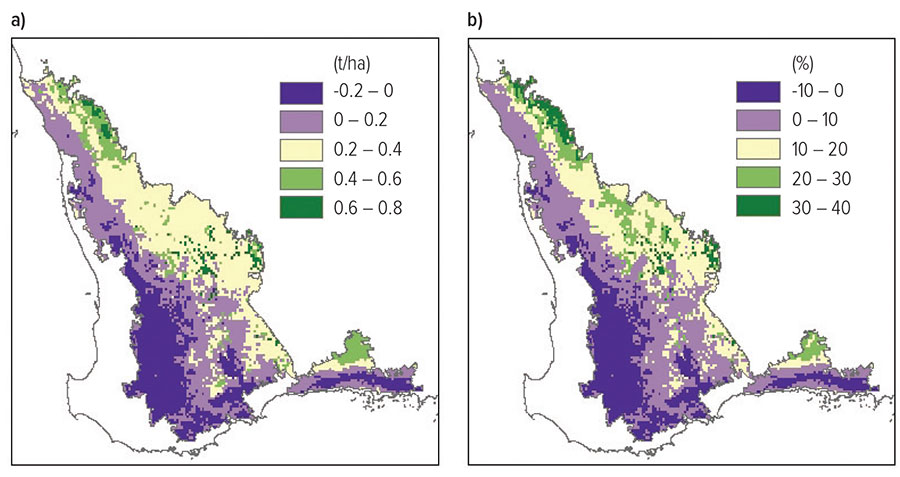 The greatest yield increases were in the north-eastern part of the wheatbelt, where fallow could increase wheat yield by 10 to 40 per cent.

Growers in the LRZ have developed innovative farming systems to cope with the challenges they face with low and variable rainfall. For example, canola is an emerging break crop in the LRZ and growers have become adept at increasing canola areas when sowing conditions are favourable. Further improvements in the LRZ will require growers and researchers to work together to identify new profitable break crops to complement canola and develop innovative management packages to fit them into a farming system.

In order for growers to consider these more-complex crop sequences for the LRZ, they will likely have to increase on-farm storage for more seed varieties, Dr Fletcher says.

Accessible high-value legume market outlets for growers in the Low Rainfall Zone  will also be necessary.

Further economic studies are underway. These will include calculating full gross margins for the trials at Merredin and Hyden and using simulation modelling to extend the results of these trials to other locations.