Steve Thompson crops near Newdegate, Western Australia, on soil types he describes as grey, white sands and sands-over-gravel. Since he estimates that about 25 per cent of his farm is non-wetting, he is an advocate for using wetters as an “insurance tool” to get crops out of the ground.

However, Steve Penny, field operations manager at TrialCo – which has undertaken a two-year, GRDC-supported research project on wetters at 10 trial sites in the Albany, Esperance and Kwinana Port Zones – says the jury is still out on the research on these sandy soil types.

“Our mandate was to expand the research on wetters into sandier soils and in marginal rainfall conditions, as previously they have been shown to have some success in Forest gravel soils,” Mr Penny says.

“Ironically, the seasons we’ve had have not been marginal and we are not seeing clear responses from the small-plot trial work we have undertaken … but it could be due to a host of variables.”

Seasonal differences and changes in climate have a big effect. Growers should also consider soil type and soil water repellence variability as these also can be significant factors when deciding if to apply wetters.

The crop sown with the wetter – for example, canola – can compensate for low initial plant densities. Significant differences in yields are often hard to detect as being a result of wetter application.

In contrast, demonstration work over three sites in the Albany Port Zone, by Southern Dirt and Stirlings to Coast Farmers using grower equipment and large-scale strips on Forest gravel soils, has been able to draw some conclusions from the application of wetters.

Non-wetting soil types range from sandy to Forest gravel and are characterised by uneven crop germination, poor weed control and inefficient water and nutrient use efficiency. They are a protracted constraint for growers, particularly in drier years, in the Great Southern and South Coast regions of WA.

Compared to mechanical interventions such as clay spreading, delving or inversion ploughing, wetters offer a potential short-term mitigation strategy that can be used over large areas at a relatively low cost. They are also easy to integrate into current management practices.

“The variability we are dealing with is twofold,” Mr Penny says. “Non-wetting soils can not only be very patchy across paddocks, but in each season we also experience variation in total rainfall along with the magnitude and timing of rainfall events, which can also influence the degree of non-wetting apparent.

“Significant pre-season and early season rainfall may strongly influence the extent of non-wetting symptoms each season. With a good start to the season, which may wet-up profiles, the condition may not be an issue.

However, Southern Dirt project manager Daniel Hester says that although early biomass differences were detected in these large-scale grower demonstration sites, it did not translate to significant yield increases.

“But there may be other advantages of wetter use in terms of more-even germination and rapid canopy closure, which can improve weed management,” Mr Hester says.

A range of wetters is now available with various recommended methods of application and rates.

The Southern Dirt and Stirlings to Coast Farmers demonstration strips determined that the best results, as measured by plants per square metre approximately one month after sowing, were obtained from applying a wetter behind the seeding boot when compared to applying directly to the seed or under the press wheel. 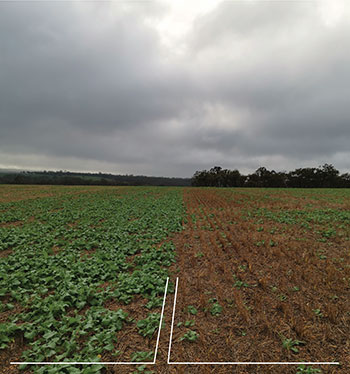 “Near or on-row placement of the wetter and seed appeared to provide some benefit as the seed was placed in close proximity to the previous season’s furrow,” Mr Hester says.

“This indicates a possible residual effect of the wetter and improved wettability of the soil from the previous crop’s root growth.

“It also means that some modification to growers’ equipment might be necessary to improve placement, for example, the use of implement guidance such as ProTrakker.”

There was no benefit in increasing the wetter rate from the recommended label rate, and near-furrow placement of the surfactant appeared to be the most effective.

As wetter technology advances, there is a need to continually validate these tools for grower use and evaluate their potential on different soil types and seasons, together with the best means of application.

Mr Hester says one of the more immediate needs is to trial wetters at different water rates to see if this could improve performance.

Stirlings to Coast chief executive Nathan Dovey says that with concurrent developments in precision agriculture, drone technology and data anlaysis, we may in the future have opportunities to better-validate tools for managing variable soils.

Meanwhile, until a more cost-effective tool is available, Steve Thompson will maintain wetters as a tool in his toolbox for his Newdegate non-wetting soils.

“We can have a short growing season in this region and we need to capitalise on any tool that improves the odds of getting a crop out of the ground fast. Additionally, I’m also beginning to see a residual effect of the wetter application in subsequent seasons, so for my environment and system there are gains,” Steve says.

“As soils and systems are all different, growers are encouraged to undertake their own strip trials,” Mr Dovey says.

Two useful diagnostic tools are available to assist in decision-making for non-wetting soils:

The molarity of ethanol droplet (MED) test is a popular rapid method for assessing the degree of soil water repellency of soils and is available from commercial soil testing laboratories. It can give an idea of the extent and degree of non-wetting.

Two useful diagnostic tools are available to assist in decision-making for non-wetting soils:

The molarity of ethanol droplet (MED) test is a popular rapid method for assessing the degree of soil water repellency of soils and is available from commercial soil testing laboratories. It can give an idea of the extent and degree of non-wetting.

Ranking options for soil amelioration (ROSA) is a decision-support tool available online and able to indicate soil amendment options that are likely to provide the biggest economic return when dealing with multiple soil constraints. It covers a number of amelioration options including incorporating clay, lime and gypsum, as well as the use of wetters.