Research on sodic soils in Western Australia's south-eastern wheatbelt is demonstrating the importance of identifying gypsum-responsive areas before investing in gypsum applications as a strategy to improve yields in these challenging soils.

Sodic soils have an excess accumulation of sodium and salts within the soil profile.

DPIRD senior research officer David Hall, who managed the south-eastern wheatbelt research as part of the GRDC-invested Subsoil Constraints project, says trial strips have shown varying degrees of gypsum responsiveness - even in soils which were thought to be dispersive.

Mr Hall says differences in gypsum responses were found between clay soils within one paddock, reinforcing the importance of soil testing before growers invest in gypsum applications.

DPIRD has been managing gypsum trials for more than two decades in the south-eastern region, with earlier research suggesting applied gypsum could improve crop yields on any sodic soils.

The current research project included the interrogation of data from these historical trials, which highlighted the fact that despite more than 50 trials investigating the effects of gypsum, only 25 of those trials demonstrated any yield gain.

"From that initial research, we knew that we needed a better way to determine if certain sodic soils would be responsive to gypsum to ensure growers can make more informed decisions about their soil amelioration investments," Mr Hall says.

"Just because a soil profile may be sodic, doesn't necessarily mean this soil will respond with a yield increase after the application of gypsum, despite this being a well-known and widely understood strategy to alleviate this soil constraint."

ESP the key to responsiveness 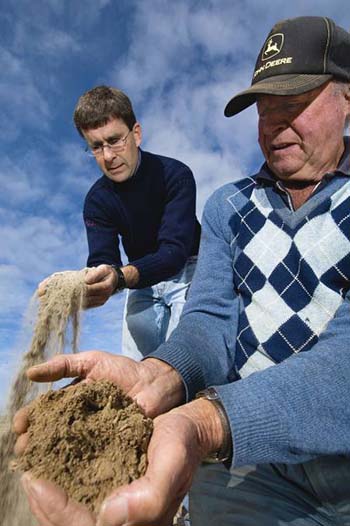 By comparing the soil properties between gypsum-responsive and unresponsive sites, the researchers showed that an average exchangeable sodium percentage (ESP) within the zero to 30-centimetre layer was the most accurate way of determining gypsum-responsive soils.

We knew we needed a better way to determine whether certain sodic soils would be responsive to gypsum to ensure growers can make more informed decisions about their soil amelioration investments. - DPIRD senior research officer David Hall

Other measures to help growers identify gypsum responsiveness in sodic soils include the stability index and dispersion index.

Mr Hall says the dispersion test can be completed on-farm simply by dropping aggregates into rainwater.

"As a rule of thumb, gypsum-responsive soils will have a loamy to clay texture at the surface, form cloudy puddles after heavy rainfall and more than 50 per cent of those aggregates (soil crumbs) will disperse into their sand, silt and clay fractions when immersed in rainwater," he says.

Data from the recent GRDC-invested trials, coupled with these more accurate measurement techniques, is now suggesting that soils need to be at 10 ESP or above in the zero to 30cm soil layer to gain enough value from the applied gypsum to make this strategy economically viable for growers.

Yield results after three years, combined with data analysis from the historical trials, show a clear correlation between a yield response to gypsum and an increasing ESP score.

Mr Hall says the analysis from the historical trials has highlighted that the most economical yield response occurred when gypsum was applied at the rate of 2.5 to five tonnes per hectare.

Some yield responses to the applied gypsum were more than double that of the control treatment.

These mainly occurred in wet years where the dispersion had prevented crop emergence or had led to waterlogging.

While the on-farm dispersion test is a good indicator of gypsum responsiveness, more accurate testing should occur through soil testing laboratories, giving an exchangeable sodium percentage.