Access to on-farm lime could present significant opportunities for growers in Western Australia, particularly those in the eastern wheatbelt, to improve both subsoil acidity and crop yields without relying on coastal lime sand.

While more research is needed to better understand the long-term impact of these alternative liming sources, the first two years of trial data suggests growers could see significant benefits from using on-farm sources at similar, or even greater, levels than coastal lime sand.

The GRDC-invested trials are on the property of the Nixon family in the eastern wheatbelt, where numerous sources of on-farm lime have been identified.

The Nixons have various paddocks of on-farm lime associated with their morrel soil type, some with large rocks and pebbles that require screening. The screened rocks have a high neutralising value and can be potentially crushed as a source.

Managed by the WA Department of Primary Industries and Regional Development (DPIRD), the trials are comparing all the various carbonate products from the Nixons' property, including bulk soil applications, crushed rock and screened morrel lime, with coastal lime sand.

The trials at the Nixon property are also investigating incorporation treatments, such as offset discs, deep ripping and deep ripping with inclusion plates, to ascertain the most appropriate soil mixing strategies and responses to alleviating compaction often associated with sandplain soils.

DPIRD senior development officer Caroline Peek is managing the trials and says the results are promising in regard to the value of on-farm lime sources.

Ms Peek believes many growers in the eastern wheatbelt are ready to investigate these alternative liming sources, but says the economics must be right for it to become a profitable long-term strategy.

She says the freight component of transporting lime sand from the coast into the eastern wheatbelt has been identified as an issue for many growers and has been the catalyst for the research into these alternative sources.

"Ultimately, we are attempting to determine if these on-farm lime sources have the ability to compete with coastal lime sand, both in terms of soil improvement and economic outcomes across the whole supply chain," she says.

"We now have two years of trial results, which is a good early indication, but we may need more years of research to fully understand how the long-term benefits of these types of alternative lime sources compare with coastal lime sand." Yield benefits were obvious in some treatments when compared to the coastal lime sand.

Yield benefits were only apparent from the on-farm lime sources that were mixed into the soil with one of the three amelioration treatments.

Results in 2018 were not as clear, with the control and coastal lime sand producing yield results as good as the on-farm liming sources. Ms Peek says a wetter winter season in 2018 may have reduced the yield effects.

When averaged across all cultivation treatments, all carbonate ameliorants - except crushed rock applied at 4.5 tonnes per hectare - improved the pH in the top five centimetres of the soil compared to the nil treatment. 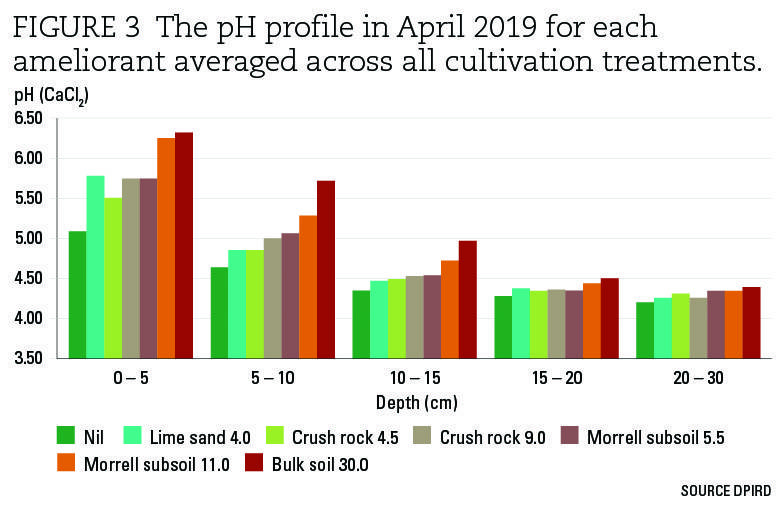 Pouring vinegar on to a sample is the easiest way to determine whether the sample is worthy of further testing, she says.

Further testing could include:

Ms Peek says the key message from her research is to understand the neutralising value of any on-farm carbonate sources.

The neutralising value is the measure of the ability of the lime to increase soil pH.

Ms Peek says research has shown that finer particles react faster in the soil, giving a more immediate response, so achieving a balance between particle size and neutralising value is the key.

"It's a bit of a juggle in the sense that you need to have a high neutralising value, but larger rocks or pebbles can pose problems in your spreader and are not effective due to their size," she says.

"Ideally, you will be able to identify a morrel lime source with a high percentage of finer particles that have a reasonable neutralising value that allows for both ease of spreading, reduced rates and a faster reaction time in the soil."

She says this would more than likely involve some form of screening of the larger rocks.

Comparable application rates must be determined to achieve the equivalent results using on-farm lime instead of coastal lime sand.

This can only be determined for individual sources by testing for particle size distribution and neutralising value and using a tool such the iLime app.

"This will also help you determine what rates you require to ameliorate effectively," Ms Peek says.

"On-farm sources often have a larger percentage of very fine particles, which gives them an advantage but the neutralising value is often lower," Ms Peek says.

"For example, we have calculated that with the trial sources, 15 to 30t/ha of the lower-neutralising-value bulk morrel soil equates to 4t/ha of coastal lime.

"Likewise, between 5.5 and 11t/ha of sieved morrel lime equates to 4t/ha of coastal lime sand."