Some plants will change the way they grow and reproduce to avoid all forms of weed control - a fact now confirmed by one of Australia's longest-running paddock surveys.

The project's findings are a stark reminder that growers need to 'diversify their diversity' when it comes to all weed control strategies, to stay one step ahead of the adaptive potential in weed populations.

"In simple terms, this study has shown us how weeds, particularly wild radish, can evolve and adapt their growth habit or life cycle to evade weed control, not only in regard to herbicide resistance, but also non-herbicide control strategies that growers now use," Dr Ashworth says.

Conversely, the far-reaching study also found there is a lack of any clear evolutionary response, when compared to other weed species, of annual ryegrass to harvest weed seed control (HWSC).

Dr Ashworth says this is exciting news for growers because it reaffirms the value of HWSC.

"The message from this finding is that if you are employing HWSC of any sort, keep doing what you are doing," he says.

"And if you are not using HWSC and have a ryegrass problem, it is worth investing in strategies to combat this challenge." 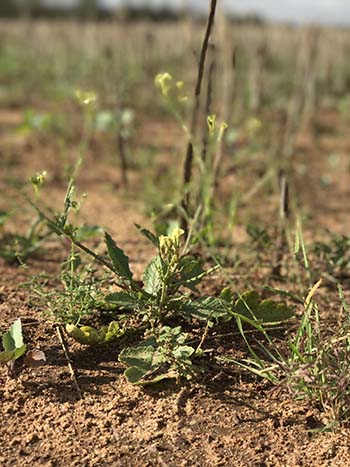 Wild radish had become so prolific in some paddocks included in the survey that growers feared the paddocks would become unusable. Photo Jo Fulwood

Mr Newman meticulously documented the impacts on weed populations of diverse and long-term weed control strategies, with the results over the past 19 years not only demonstrating the incredible value of aggressively managing these weed populations but also the surprising biological response of the weed plants in their attempts to survive.

When the surveys began, some of the paddocks could almost not be cropped, such was the weed infestation.

Mr Newman's aim was to reduce weed numbers to bring these paddocks back into the profitable cropping cycle.

He says in the late 1990s, in this region specifically, some weeds - particularly annual ryegrass and wild radish - had become so prolific that growers feared crops such as lupins and canola would become completely unusable in their rotations. The 28 growers involved in the long-term survey undertook a range of different weed control strategies, such as rotating herbicide modes of action and rates, crop sequences, introducing fallows and pastures, plus HWSC - including chaff charts, narrow windrow burning and seed impact mills - to aggressively attack the weeds in the identified paddocks.

"When we began this process, some of the paddocks had ryegrass plant numbers up around 500 to 600 plants per square metre," Mr Newman says.

"Now, the numbers of ryegrass in some of the worst-affected paddocks are down to almost zero, and these paddocks, which previously had been sacrificed because of these high weed numbers, are back in the cropping rotation.

"The difference is quite staggering in what were originally extremely weedy paddocks. The crops in these paddocks are now very clean."

While this aggressive weed management approach over the past two decades is a good news story for these growers, it was also an exciting opportunity for AHRI to use the information contained in these surveys to ascertain the evolutionary consequences of weed seed control on long-term weed populations.

Dr Ashworth says the results are not only interesting from a biological perspective, but also the long-term ramifications of this evolutionary response need to be understood across the industry.

"Herbicide resistance evolved when we selected for rare resistant individuals out of large populations of genetically diverse weeds," he says.

"For example, one of the findings from the research was wild radish collected from paddocks that had undergone a long history of sustained cropping, using both herbicide strategies and HWSC, were found to flower earlier and set their pods at a lower height."

The concern for growers in these findings is that surviving weeds, after the implementation of sustained and diverse weed control strategies, have been selected for resistance.

"Unfortunately, this may present us with a problem in the future, and while we do not want to be alarmist, growers need to understand the beast they are up against," Dr Ashworth says.

"Let's use the analogy of two boxers in a boxing ring - if you keep swinging at your opponent in the same spot, he is going to quickly learn which way to move to avoid being hit."

While plants cannot physically get up and run away to avoid a hit, they can adapt in different ways to farming practices by changing the time they germinate, how they grow and the time they flower and reproduce. 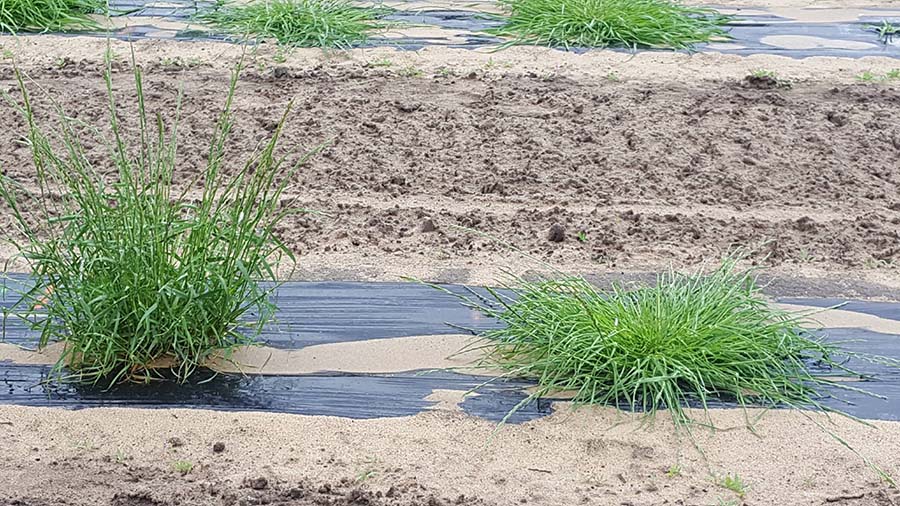 Ryegrass in one of the paddocks included in the AHRI survey. Photo Mike Ashworth

"The selection for survivors means that these weed populations have a memory of what has occurred, highlighting why we need continual weed control diversity," Dr Ashworth says. 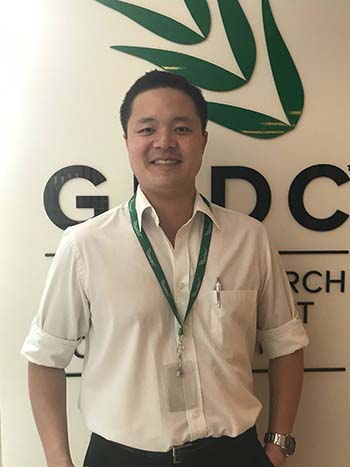 For a project as significant as this, AHRI called on specialist advice from the statisticians and researchers at SAGI-West (Statistics for the Australian Grains Industry) - a collaboration between GRDC and Curtin University, based in Perth, WA.

Overseen by GRDC's enabling technologies officer Dr John Rivers, SAGI-West was able to develop clear experimental protocols, including robust designs, at the beginning of AHRI's research, to ensure all data collected presented true and accurate records, allowing for detailed analyses and ultimately presenting the most useful information to the growers.

Dr Rivers says SAGI-West's involvement in the ground-breaking research began early in the process, with the project presenting a novel challenge in terms of understanding how to collect data relevant to the scientific question they were asking.

Once the data had been collected, the team at SAGI-West collaborated closely with AHRI to analyse the results, providing scientifically accurate findings that now give growers confidence to apply at the farm level.

"Working with AHRI, the team at SAGI-West were able to apply powerful statistical tools and to develop specifically tailored statistical methodology to better understand what this complex study was telling us," Dr Rivers says.

"Given there were so many factors that were being considered in this research, we needed to be able to say conclusively that the change in weed behaviour was due to certain farming systems and practices."

The value in the collaboration between AHRI and SAGI-West was the ability of the weed researchers to get access to, and be provided with, more accurate and reliable results.

"What this means is the results have greater scientific rigour than ever before, giving growers confidence that these results can be applicable to their own businesses," Dr Rivers says.

Throughout the life of the project, the growers involved were asked a series of questions relating to the management of each paddock in the survey.

Information included the rotational history, the use history of knockdown or pre-sowing herbicides, the use of selective herbicides which are applied after the crop has emerged, plus the use of herbicide-tolerant crops can which change the application timing of normally fatal herbicide modes of action and the use of HWSC.

This information was then collated and used to understand the implications of paddock management on plant phenotype.

Seed samples were collected from both the survey paddocks and control environment and were grown in a fully randomised common garden study at the University of Western Australia's Shenton Park research facility.

Common garden studies are a type of study used to compare the way plants have adapted in different environment. With these studies, all plants are grown in the same environment and given the same inputs to ensure that any difference found is due to the genetic attribute of the plant.

In addition, a germination experiment was undertaken to compare seed germination and dormancy among populations that have been exposed to long-term weed control.

Dr Ashworth says one of the most interesting findings highlighted by the research was the ability of wild radish populations to evade HWSC.

"When you look at wild radish, it is an amazing species that comes in many forms and colours, owing to its significant genetic diversity," he says.

"The Achilles' heel of wild radish is that it retains nearly all of its pods on the plant until harvest, making it an ideal candidate for interception and destruction using HWSC."

The height of the lowest-retained wild radish pod changed significantly between the in-crop population and the control.

This is important because it directly affects the maximum cutting height and interception efficiency at harvest, with seeds located under a nominal cutting height of 10 centimetres unlikely to be intercepted, thereby replenishing the soil seed bank.

This is one of the first studies to prove the intelligence of weed plants, and their ability to evolve over time to evade control strategies in an attempt to survive. - Dr Mike Ashworth

Dr Ashworth says the data indicated the pods in the crop were, on average, 12cm lower than the pods on the plants in the control plots.

In terms of time of flowering, the wild radish patches in-crop flowered 11.5 days earlier than the control populations.

In regard to annual ryegrass, the research demonstrated early flowering time was found in all intense cropping situations but was not directly correlated to the use of HWSC.

Likewise, on all sites, germination percentages of all ryegrass seeds were lower in the intensively managed in-crop samples when compared to the control, indicating there is a shift towards an increase in ryegrass seed dormancy.

What this means for growers, Dr Ashworth says, is while HWSC is effective, so too is an early sown crop to outcompete the ryegrass, particularly those seeds that are germinating later.

"A competitive crop might be changing the cultivar, the seeding rate, orientation, time of sowing or row spacing," he says.

"We need to exploit this extra dormancy of ryegrass as a weakness by sowing competitive crops early."

Ultimately, Dr Ashworth says, all this intensive research points to one simple message for growers - "diversify your diversity".

"This is one of the first studies to prove the intelligence of weed plants, and their ability to evolve over time to evade control strategies in an attempt to survive," he says.

The only long-term solution, Dr Ashworth says, is to continually modify weed-control strategies to be one step ahead of this evolutionary process.

The other message, which is just as critical, is to continue to invest in HWSC.

"Our research demonstrates this is a strategy that is working," Dr Ashworth says.

The paddock surveys, under the direction of Mr Newman, will continue for the foreseeable future with assistance from DPIRD.