Tiny conical snails, or small pointed snails - some even smaller than a canola seed - can be removed from harvested canola loads using an innovative cleaning sieve and roller system - but finding the most effective combination of cleaning methods is a juggling act.

Snail crushing rollers have been used in South Australia for a number of years. The roller concept has also recently been introduced to growers in Western Australia.

Stirlings to Coast Farmers - a grower group based in WA's southern region - has been trialling a range of sieves and roller combinations to determine the most effective and profitable way to clean snails from harvested loads.

With tight new delivery specifications relating to snails in harvested canola loads, these cleaning systems could be critical for WA growers as a final step in their snail eradication programs.

One hundred and fifty tonnes of canola containing snails (CANS) was used in the trial.

Dr Alaina Smith, a researcher with Stirlings to Coast Farmers, is heading up the GRDC-invested research project - which has been supported by the WA Department of Primary Industries and Resource Development (DPIRD) and Cooperative Bulk Handling.

Dr Smith says finding the right combination of cleaning methods, to produce the cleanest sample, with minimal admixture and damaged seeds, could ultimately be a trial-and-error process for each grower, depending on the number of snails and shell size.

The focus of this research has been to maintain market access through promoting measures to minimise snails in grain and follows earlier investment by DPIRD to investigate snail rollers and other post-harvest cleaning options. 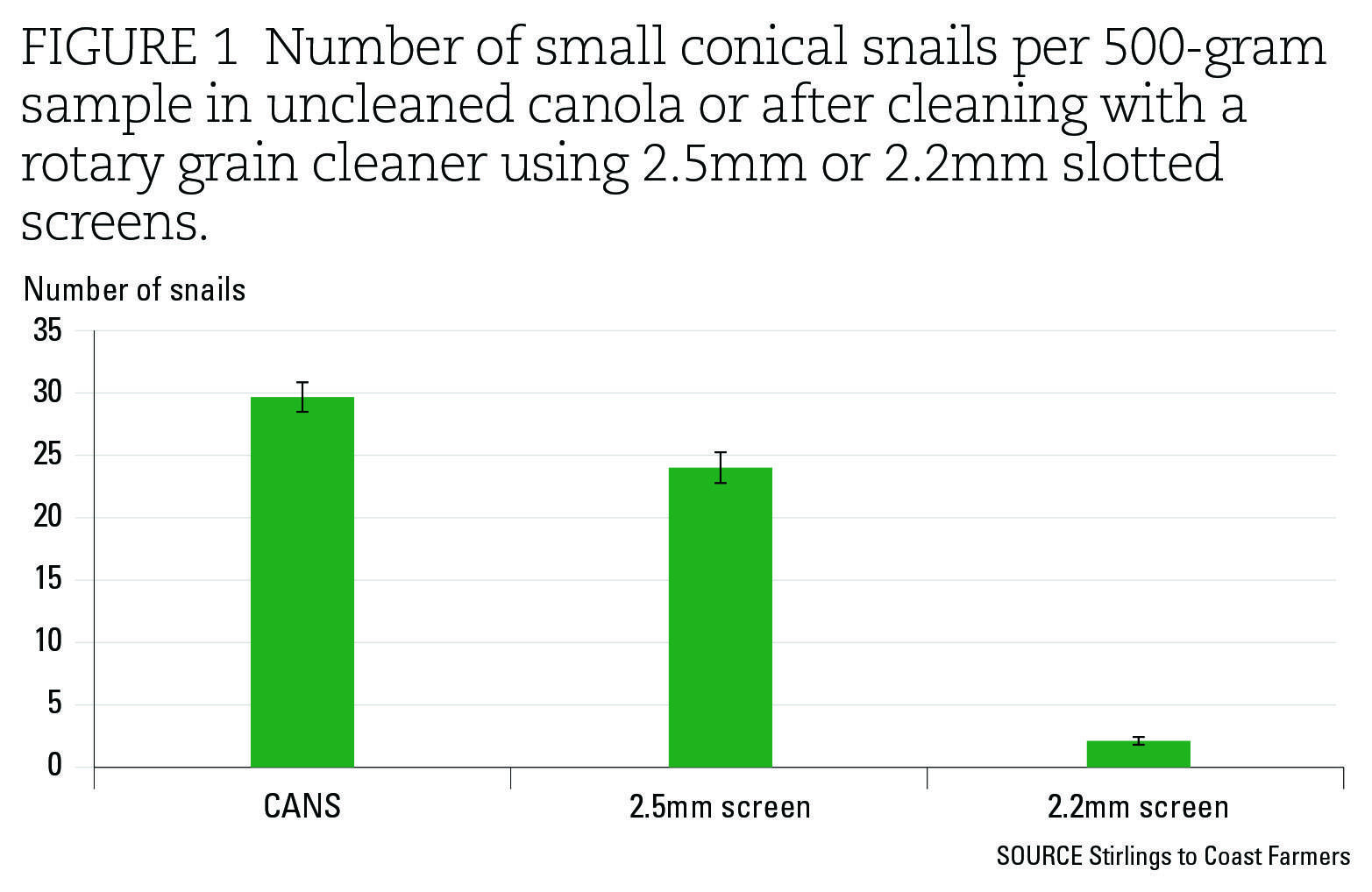 Dr Smith says putting the grain through the smaller 2.2mm slotted sieve achieved a 95 per cent reduction in snail numbers, but also resulted in grain losses of 5.5 per cent.

"For most growers, this loss percentage wouldn't be acceptable, given there is no general market for this seconds grain," she says.

"The sample we used was a mix of non-GM canola varieties with an average seed size of 1.85mm, so we estimate the losses could be even greater than 10 per cent for varieties or seasons which produce larger seeds."

Dr Smith says crushing rollers can be useful when the snails are as small as, or even smaller than, the size of the grain.

"Rotary grain cleaners, using cleaning screens, rely on the difference in size between the snail and the grain to screen or scalp snails out of the grain," she says.

However, when these tiny snails can get through these sieves, other cleaning methods will be required.

After cleaning, grain samples were put through a snail crushing grain roller, using a combination of metal and rubber rollers, with the hopper settings and gap widths between the two rollers adjusted to trial different cleaning combinations.

The tightest roller gap (of approximately 0.1mm) achieved the cleanest canola sample, and a roller gap of 0.7mm, or below, also significantly reduced the number of snails in the canola by 91 per cent.

But, as with the smallest sieve settings, the tighter roller settings also resulted in some grain losses through increased admixture and seed damage.

"Again, it's a balancing act between cleaning the grain and ensuring the amount of admixture and damaged grain still meets the receival standards," Dr Smith says.

The most profitable approach

Working with farm consultant Rod Grieve from Evans and Grieve, Dr Smith then considered all cleaning options in terms of profitability.

This part of the project included a range of delivery options such as:

Dr Smith says the results of this analysis show the most profitable path forward will depend on the circumstances for each business.

"If you are only cleaning small amounts of grain, accepting the discount on delivery or using a professional grain cleaner may be the cheapest and easiest option," she says.

"Conversely, if you have large tonnages to clean, you may consider investing in a rotary grain cleaner and a crushing roller to achieve the most profitable outcome."

Ultimately, she says, decisions on the way to handle snails in canola will need to be made on a case-by-case basis.

"We are hoping to hear from those growers using rollers during the 2019-20 harvest to get a much better picture of what these roller machines are capable of," she says.

Further research and analysis will be undertaken during and after the 2019-20 harvest to assess snail cleaning methods in wheat and barley.

Dr Smith says the development of an online calculator is the next step in the project to help growers estimate costs and make informed decisions for cleaning their grain.