High mouse numbers in some regions mean growers must be vigilant

High mouse numbers in some regions mean growers must be vigilant

A mouse with a 'spool and line' tracker attached. Researchers use the system to trace a mouse's micro-habitat use.
Photo: CSIRO

Introduction of conservation agriculture has changed mice management in the south.

It is now more important than ever to monitor mouse activity - and reduce food resources and cover in paddocks - prior to seeding to reduce potential mouse damage. This is particularly the case in southern regions, where mouse numbers are moderate to high.

Farmers need to walk through stubbles to determine the level of mouse activity in their paddocks.

Mouse activity is not consistent across farms or regions, so monitoring needs to take place across a range of crop types and paddock history.

If numbers are high, bait six weeks prior to sowing and - if numbers are still high at sowing - spread bait straight off the seeder. As always, it is important to contact your bait suppliers early to ensure adequate supply.

Mouse plagues occur irregularly and cause serious economic damage in grain-growing regions of Australia, especially when numbers are high in autumn - which coincides with sowing of winter crops in southern regions.

Since the introduction of conservation agriculture (CA), mice are now resident in crops (considered 'source habitats') and then spill over into margins (considered 'sink habitats') - which is the opposite of what has historically occurred with conventional farming systems.

These findings have significant implications for the location and timing of mouse management.

In the past 10 to 15 years, CA practices of zero or no-till farming have been adopted by most Australian grain farmers. The environmental and financial benefits of CA systems are well known. 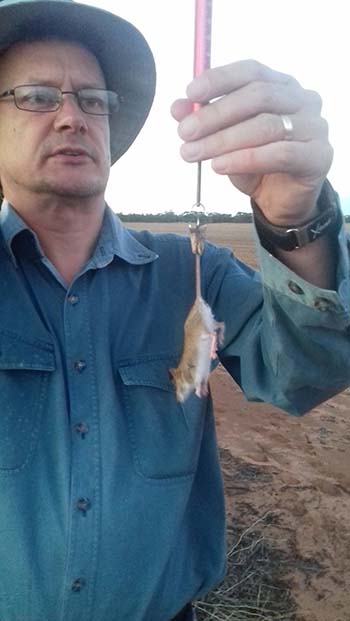 Given this change in disturbance and habitat availability for a key pest species in these systems, we wanted to determine whether mice have responded to these changes.

We conducted an analysis of CSIRO mouse trapping data from Walpeup, Victoria. The data were collected for 20 years prior to the introduction of the CA systems (from 1983 to 2003) and for seven years post-CA (2013 to 2020).

We compared changes in mouse abundance in margin habitats (along fencelines and other edge habitats) with crop habitats.

In the current undisturbed conservation systems, we see large undisturbed 'mouse warrens' and runways. These burrows potentially remain in place for months or even years, and mice simply need to do minor renovations rather than having to dig new burrows.

As part of our GRDC mouse ecology project, we are also examining how mice use crop paddocks in search of food and how they use mouse burrows.

To monitor movements of mice, we use the 'spool and line' tracking technique.

Using Supa Glue, we stick a small cotton spool on to the back of a mouse. As the mouse moves around, the cotton unwinds, leaving a trail of where the mouse has foraged, and then the spool falls off.

We pick up the trail of thread the following day to work out what type of habitat mice prefer to use and which burrows they use.

Mice appear to be happy moving across relatively open crop areas, but also move through areas with heavy stubble loads.

Farmers need to remain vigilant about what mice are doing in their paddocks.

Mice do particularly well when large amounts of grain are left on the ground. This can occur when yield has been high, or if severe wind storms (for example, those in November 2019) have knocked ripening grain on to the ground.

Mice will build up within a paddock (for example, a storm-damaged barley crop), but not necessarily in a neighbouring paddock (not as severely damaged by the storm or a different crop type).

It is therefore important to monitor in each paddock in order to decide how to conduct mouse management.

The main option for controlling mice is to spread zinc phosphide baits. We need to ensure this remains a viable control option for as long as possible.

Baits must be laid at the label rate of one kilogram per hectare. This leaves two to three grains per square metre, equivalent to 20,000 to 30,000 baited grains/ha, which should be sufficient to manage most mouse populations.

Zinc phosphide baits appear to be less effective if there is abundant alternative food available, for example when large amounts of grain has spilt because of storm damage prior to harvest.

We are conducting research to develop strategies to help deal with this problem.

Some practices to reduce alternative food sources and cover, if applicable for your cropping system, include: