Australian scientists have developed a new tool to reduce the guesswork by grain growers in assessing the need to take action against Russian wheat aphid (RWA) to prevent yield and financial loss.

Through a Grains Research and Development Corporation (GRDC) investment, a RWA action threshold calculator has been developed to underpin grower and adviser decision making.

The predictive calculator indicates when in-season control measures are economically warranted. It can help growers determine whether a timely spray application is needed to prevent crop and profit losses, or whether insecticide application would be an unnecessary cost.

The new ‘RWA growth stage 30 action threshold calculator’ and instructions for its use are now available.

RWA was first identified in Australia in 2016. This cereal pest is now present in cropping areas of South Australia, Victoria, Tasmania and New South Wales, and has recently been detected in Western Australia.

Scientists, with GRDC investment, have been studying RWA under southern Australian conditions and within local farming systems since it was first detected in 2016. They have been building a biological and ecological profile of the pest to provide Australian growers with scientifically robust management tactics for the future.

The GRDC investment, ‘Russian wheat aphid risk assessment and regional thresholds’, was established to investigate regional risk and management options for RWA. The collaborative investment has been led by the South Australian Research and Development Institute (SARDI), the research division of the South Australian Department of Primary Industries and Regions (PIRSA), in partnership with sustainable agriculture research organisation cesar.

The regional thresholds aspect of this research has involved capture of data from a series of manipulative trials operated by a number of farming systems groups and other service providers across south-eastern Australia.

Dr van Helden says the calculator indicates if the ‘economic injury level’ is likely to be exceeded between GS30 (start of stem elongation) and GS50 (start of head emergence) and, therefore, if control should be actioned.

“The economic injury level is reached when the cost of pest control equals the value of yield loss resulting from feeding damage. If pest densities surpass this level, losses will be greater than the cost of control,” he says.

“The action threshold developed for RWA is ‘dynamic’. This means that yield potential, market value of the crop, and cost of control are factored into each season’s calculation.

“The calculator will indicate the action threshold at which control should be taken in order to prevent an increasing RWA population from reaching the economic injury level.”

The action threshold that has been developed can be applied to winter and spring cereal varieties.

Key findings that have been used to form the basis of the Australian intervention rule for RWA are:

Dr van Helden says the maximum percentage of tillers with RWA is usually reached between GS40 (start of booting) to GS50. This is the case for all cereals susceptible to RWA (barley, wheat, durum wheat). Predation and parasitism would also be expected to play a role in controlling the aphid population growth rate.

Experimental data was not sufficient to develop an action threshold for infestations detected before GS30. Growers may choose to control infestations at an earlier growth stage, however the cost-benefit cannot be estimated based on current knowledge. Overseas research suggests plants can compensate quite well for early attacks.

A control decision should be made based on RWA population densities between GS30 and GS50. Monitoring at GS30 will allow prediction of the aphid density at GS50, and therefore indicate if action is need during that time period.

Dr van Helden says that due to the delay between crop inspection and pest control, a predictive action threshold is preferred in integrated pest management, as it factors in the rate of change in aphid pressure during the intervening period.

“Unlike most action threshold rules in the grains industry which have been set based on field observations and estimation, our research into RWA has used an experimental approach to collect data on the relationships between damage, pest numbers and impact.” 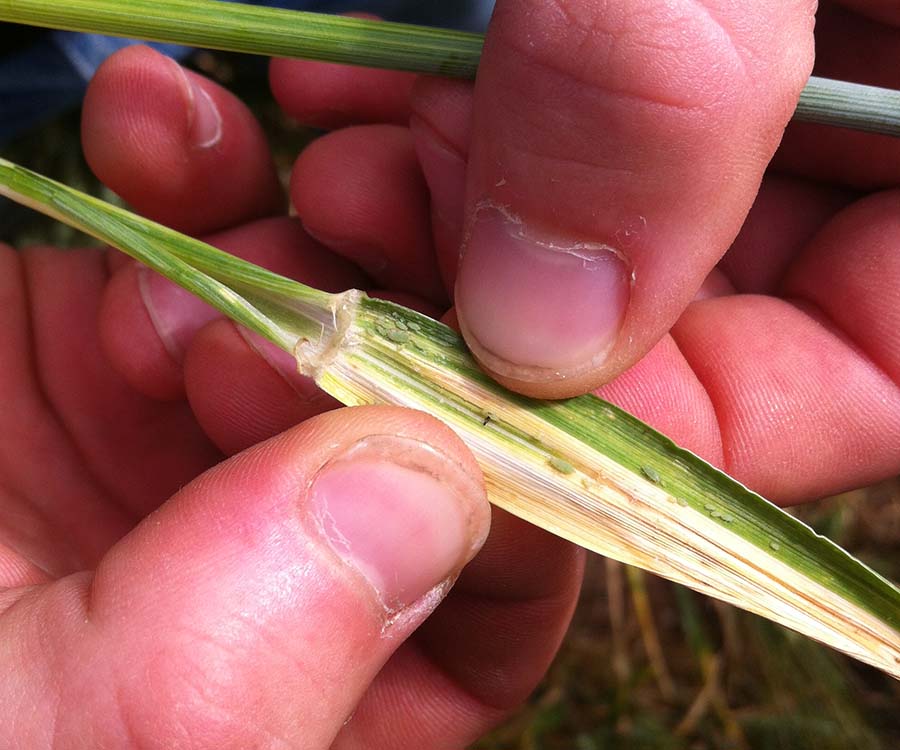 Australian scientists have developed a new tool to reduce the guesswork by grain growers in assessing the need to take action against Russian wheat aphid to prevent yield and financial loss. Photo: Maarten van Helden

Wetter and cooler summers or early breaks could increase the risk of early season infestation by RWA in mainland grain growing areas.

Since the discovery of RWA in Australia, the GRDC has invested in: experiments to determine aphid biotype (there is a single biotype in Australia); research to determine the level of susceptibility or resistance of commercial wheat and barley cultivars to RWA; RWA biology, ecology and economic thresholds under Australian conditions; an investigation into alternate hosts for RWA; trials looking at insecticide efficacy; development of a green bridge risk forecasting tool; assessing potential sources of plant resistance; and provision of practical resources for growers and advisers.