A University of Melbourne postgraduate student has taken important first steps towards the development of an integrated pest management (IPM) strategy for a range of crop pests in south-eastern Australia.

Dr Josh Douglas examined four insect species as part of his PhD thesis, co-invested by GRDC and CSIRO, from 2014 –19.

The study aimed to demystify the factors contributing to pest outbreaks and crop damage that could help guide management options for growers.

Understanding the feeding behaviour of Portuguese millipedes and common pill-bugs was a major focus of the research, following increased reports of these little-known pests causing sporadic crop damage.

“Growers have increasingly reported these pests to be a problem over the past decade,” Dr Douglas says.

“The rising number of paddocks with high pest numbers can, at least partly, be attributed to the increasing proportion of paddocks that retain crop stubble across years, given that stubble provides the pests with a source of food, shelter and moisture.”

He says another objective of the research was to determine why millipedes and pill-bugs “sporadically switch to feeding on crop seedlings”, since they are detritivores, which primarily feed on decaying plant matter.

The first step in understanding the pest status of the Portuguese millipede and common pill-bug was to understand their ability to damage common crop seedlings.

This was achieved by supplying the insects with crop seedlings (one to 22 days after emergence) inside plastic ‘microcosm’ containers. 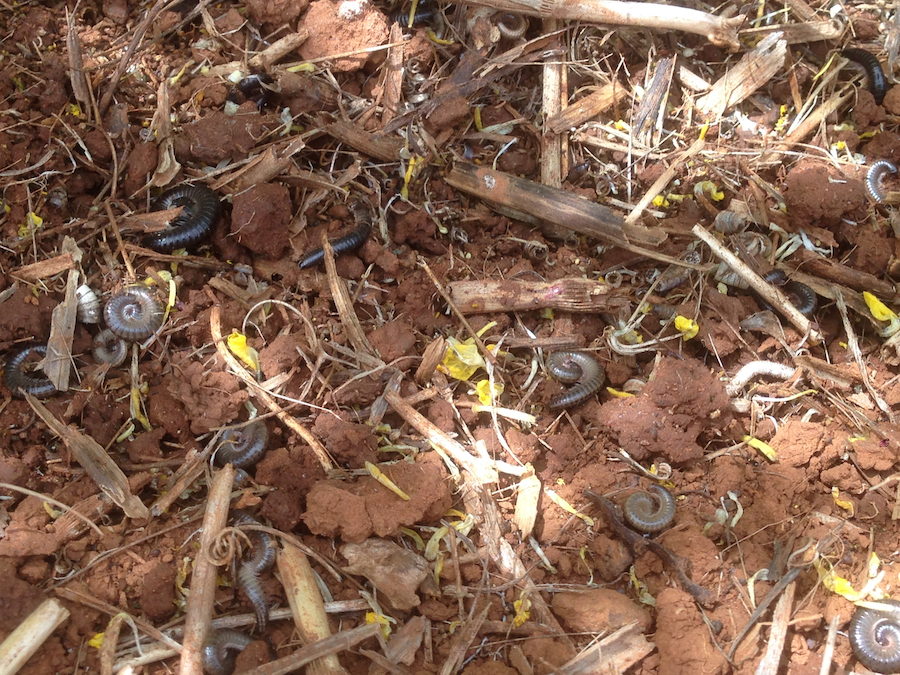 The Portuguese millipede, which growers have increasingly reported as a crop pest in the past 10 years. Photo: Josh Douglas

Dr Douglas says the study showed Portuguese millipedes were limited in their ability to damage a wide range of crop types, mainly because they have “weak mouthparts” adapted to feeding on soft, decomposing vegetation.

“The limited ability for millipedes to feed on crop seedlings helps explain why they pose a sporadic pest risk.”

Of the crop types examined, only three were susceptible to damage: lupins, lucerne and canola.

The laboratory experiments suggested lupin seedlings are the most susceptible to damage because the plant’s defensive compounds, called quinolizidine alkaloids, are absent from lupin crop cultivars.

For instance, Dr Douglas found a seven-fold reduction in feeding damage where millipedes were supplied with thin-leaved sweet lupin seedlings containing the compounds, compared with seedlings of lupin cultivars that do not contain the compounds.

The study showed wheat, oats and faba beans were the least susceptible to millipede damage. “They will not be a problem in cereals after the seed has germinated,” he says.

These findings suggest growers can use crop choice and sequencing tactics to help manage the pest, he says – for example, opting to grow cereals or faba beans in paddocks where monitoring shows high millipede numbers.

The microcosm experiments found the extent of damage was also influenced by millipede size and gender, with large females causing the most seedling losses.

Paddock monitoring across Victoria and southern New South Wales was a component of the study that aimed to better understand the population dynamics of Portuguese millipedes.

“Crop stubble has a significant influence on millipede populations,” he says, adding that canola stubble provides an ideal, enclosed micro-environment for the moisture-loving pests.

Dr Douglas urges growers to monitor millipedes in canola stubble, particularly in wet areas of paddocks. “While stubble is known to be important in influencing millipede population size, several other factors are also important.

“Pest numbers were found to vary greatly from year to year in some cropping paddocks. This appears to be due to seasonal population dynamics, with Portuguese millipedes leaving paddocks during summer and, in some cases, not returning.”

He says millipedes often leave cropping paddocks during the summer months to seek refuge in moist areas at the base of plant roots or in the shade of trees.

Dr Douglas urges growers to monitor millipedes in the paddock following rains in autumn when the pests are most active. A species of slater called the common pill-bug can damage the seedlings of many crops. Photo: Josh Douglas

The experiments revealed the common pill-bug can damage a wider range of crops than the Portuguese millipede.

But some crops, such as wheat, are much less susceptible to damage after the first days of seedling establishment.

“Sowing crops with low susceptibility can minimise damage caused by the common pill-bug and prevent damage by the Portuguese millipede.

“For both species, wheat and faba beans are options where paddock abundances of these species are known to be high,” he says.

This finding was based on mite samples collected from paddocks in Victoria’s Western District and the Riverina region of NSW over two seasons.

He found cropping paddocks generally had low populations of the mite species, except for those that showed high broadleaf weed pressure in the previous season.

However, in pasture paddocks, the type and proportion of different plants grown could be used to predict mite numbers, he says.

“Low to medium mite populations were found in lucerne and grass pasture, with less than 15 per cent subclover and low pressure from broadleaf weeds.”