The wheat stripe rust pathogen can infect the crop’s leaves and heads, such as this heavy infection on a wheat inner glume.
Photo: University of Sydney

In our GroundCover rust article earlier last year (March–April 2021 edition), we reported incursions of two exotic stripe rust pathotypes (races or strains) into eastern Australia. These included, in 2017, the ‘239 pathotype’, likely from Europe, and, in 2018, the ‘198 pathotype’, likely from either Europe or South America, which brought the total number of wheat stripe rust incursions into Australia to four.

Two previous incursions of exotic stripe rust isolates occurred in 1979 and 2002. Both resulted in significant costs to the wheat industry. For example, between $40 and $90 million was spent annually on fungicides in 2003, 2004 and 2005 as a direct consequence of the 2002 incursion.

The more recent introductions of two very different stripe rust isolates in successive years is unprecedented, creating challenges even greater than those we faced in dealing with the two previous incursions.

The impact of exotic cereal rust incursions was on full display in eastern Australia during the 2021 season, especially across much of the northern grain growing region where stripe rust was very common and, in some cases, caused significant crop infection.

Despite the favourable conditions for stripe rust development in 2021, the biggest and most confusing aspect for some wheat growers was changes in the responses of some varieties to stripe rust compared with the 2020 season, with some varieties being sprayed with fungicide for the first time.

These varietal response changes can be explained by the disease resistance the varieties carry and a change in the frequencies of the two exotic pathotypes that occured in 2021.

While these two pathotypes were also the most common in 2020, accounting for 80 per cent of the stripe rust isolates identified, the big change in 2021, compared with 2020, was the increase in the incidence of pathotype 239 – up from just seven per cent of all identifications in 2020 to 43 per cent in 2021 (see Figure 1). 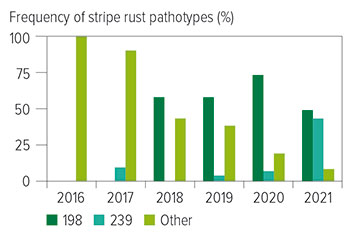 Examples of these varieties were Catapult, Coolah, LRPB Flanker, RockStar and Vixen, which carry resistance genes Yr25, Yr33 or another uncharacterised resistance gene, all of which protect against pathotype 198, but not pathotype 239.

Adding to the confusion was that some varieties are more vulnerable to the 198 pathotype than they are to 239 pathotype; for example, DS Bennett, LPB Trojan and Borlaug 100 and, to a lesser extent, Devil, Illabo, DS Darwin, Emu Rock and Hatchet CL Plus.

Our work at the Plant Breeding Institute, and with our regional collaborators, has generated a much-improved understanding of what is being seen, not only in commercial crops but also in the breeding pipelines that will deliver new, improved wheat varieties to growers in the years to come.

Updated, refined varietal stripe rust responses will be provided in early 2022 based on results from the National Variety Trials 2021 cycle.

The experiences of 2021 yet again underscore the importance of growing rust-resistant cereal varieties whenever possible and avoiding highly susceptible ‘rust suckers’.

Unlike many cereal pathogens that are either soil-borne and do not spread readily, or some foliar pathogens that have limited aerial dispersal, the rusts are ‘social’ diseases that spread rapidly on wind currents across thousands of kilometres.

Information on the cereal rusts can be found in the University of Sydney’s periodic Cereal Rust Reports and a regularly updated map of the distribution of rust pathotypes can be found on its website.