The Wheat Breeding Assembly (WBA) met in August to showcase the science generated from investment in varietal improvement sponsored by industry, universities and GRDC.

A total of 181 delegates met at the Adelaide Oval, making it the most successful WBA to date, according to the University of Adelaide's Professor Jason Able, who helped convene the conference.

Delegates heard from a wide cross-section of industry, including perspectives from growers, agronomists and breeders as well as market outlooks and research highlights from pre-breeders.

A highlight was the inclusion, for the first time, of an industry day, which allowed growers, agronomists and trade stakeholders such as GRDC and the Australian Export Grains Innovation Centre, to share their views with the pre-breeding and breeding community.

GRDC manager for wheat genetic technologies Dr Pip Wilson says the day proved popular, providing context to researchers from all parts of the supply chain, from growers' paddocks through to export market requirements.

“What growers outlined amounted to nothing short of a ‘super-wheat’ which will keep breeders busy for the years ahead,” Professor Able says.

Reflecting the diversity of farm enterprises, a broad range of traits were on growers and agronomists ‘wish list’ for future varieties.

Traits that are highly valued include, but are not limited to:

"It looks like the industry day initiative will now form a permanent part of the WBA moving forward," Professor Able says.

Delegates report being especially impressed by presentations from Tim Rethus and Ben Marshman, growers from Victoria and South Australia respectively.

Ben is the managing director of Bartleville Grain, a family owned, 3500-hectare grain growing business that operates in South Australia's lower north, with land spanning from Owen on the Adelaide Plains to Auburn in the Clare Valley. He also volunteers with Fat Farmers, an organisation dedicated to improving the health and wellbeing of rural communities.

He told delegates that improved water use efficiency (WUE) was a noticeable impact from the adoption of agronomic and varietal innovation.

"In 1997, using a tyne seeder and minimum till, we achieved a WUE of 8.45 kilograms per millimetres of total annual rainfall," Ben Marshman reported.

"In 2017 that had increased to 10.9kg/mm. Key stepping stones along the way to this gain were the commencement of no-till in 2001 and the arrival in 2011 of Mace and Scepter, with their higher yield potential."

He told breeders that his wish list for the perfect wheat for a zero-till system includes a variety that has high yield, is competitive against weeds, has shorter stature given that reliable seed destruction machines are coming, is disease resistant (with septoria and rhizoctonia given a special mention) and with a long emergence time without growth penalties once emerged.

He noted, however, that because of many different farming systems, not all traits would suit everyone.

The program for the second and third day focused on pre-breeding research, including efforts underway to meet the growers' wish list.

Presentations detailed advances that make it faster and more efficient to screen genetic diversity for the needed traits, crop modelling technology to understand likely impacts in the paddock of different trait combinations and breeding strategies, improvements in typing breeding lines both at the genomic and phenotypic levels, pathways to greater resilience in a changing environment, and the genetics that are helping wheat win against pathogens.

A wrap-up session on the final day involved breeders fielding questions from the floor.

Professor Able says that a key outcome from that session was the need for the pre-breeding and breeding communities to remain closely meshed with one another.

This helps ensure that there is constant two-way communication.

"This will continue to ensure that research is industry-relevant and transferable to the varieties of tomorrow," Professor Able says.

With the next generation of pre-breeding researchers and breeders in attendance, prizes were awarded to oral and poster presentations made by students:

Dr Wilson says she was impressed by the number of early career scientists presenting high-quality research.

"I think this shows that the wheat research community is in a good position to undertake the research needed to address future challenges to growing profitable wheat in Australia." 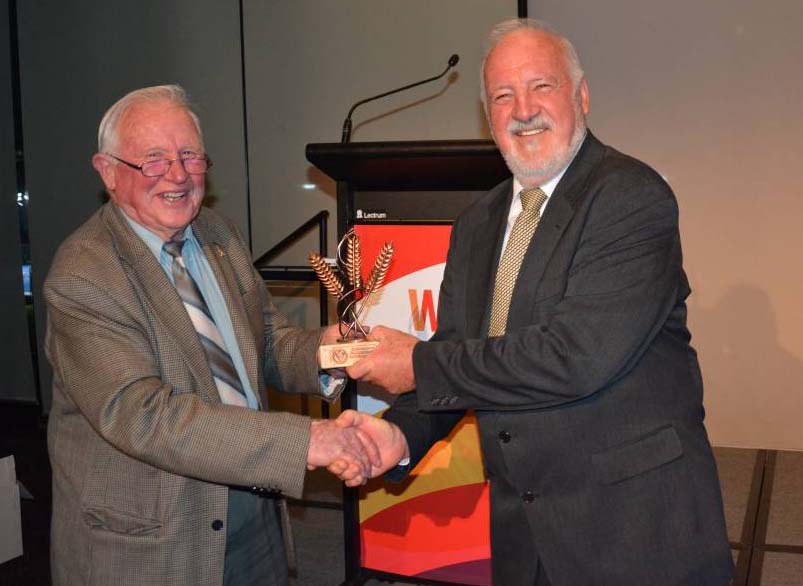 The 2019 Triticum Award was presented to Robin Wilson for his many contributions to wheat breeding in Australia over a career spanning more than 30 years, including popular variety Wyalkatchem (PBR).

The award was presented by his first manager and mentor, retired breeder Gil Hollamby, who shared stories about Robin's first days as a wheat breeder as well as his many career achievements.