A little-known seed and stubble-borne disease prevalent in oat paddocks across the southern grains region has the potential to cause more than 10 per cent yield losses in medium and high-rainfall cropping areas.

Dr McLean says paddock surveys over the past three seasons consistently identified RLL as the “most common and severe foliar disease of oats crops”.

For instance, the AgriFutures Australia-invested surveys identified the disease in 90 per cent of oat paddocks in Victoria’s medium and high-rainfall zones. But Dr McLean adds that the moisture-loving disease was not common in low-rainfall areas such as the Mallee region.

As part of the surveys, researchers examined 30 paddocks – 10 in each Victorian rainfall zone (low, medium and high). RLL infection was assessed on the top four leaves of 50 plants per paddock. Leaf tissue samples were also collected for pathotype testing to identify different strains of the disease.

The research team plans to expand the scope of the surveys to include the high-rainfall zones (HRZ) of South Australia and New South Wales in 2021.

Dr McLean says the survey data will be overlaid with the findings of GRDC-invested trials exploring grain yield penalties caused by RLL. Combining the AgriFutures and GRDC-invested research findings aims to provide an estimate of RLL yield losses in the 2018 to 2021 seasons for south-eastern Australia, he says. 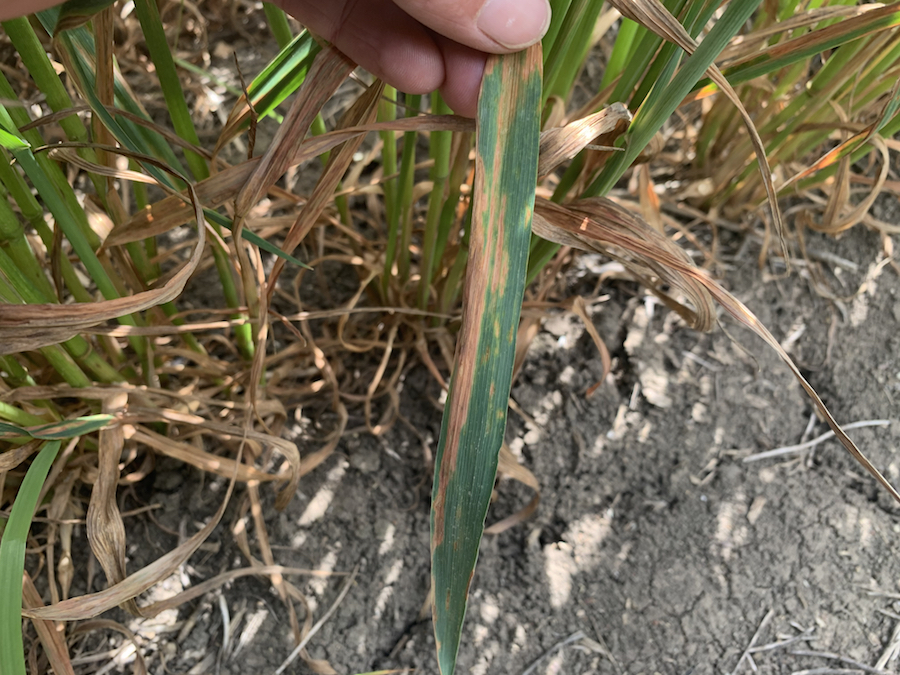 The trials at Horsham and Inverleigh, representing the medium and high-rainfall zones respectively, measured the yield performance of six milling oat varieties in the 2019 and 2020 seasons. These included Bannister, Bilby, Kowari, Mitika, Williams and Yallara.

Dr McLean says findings from the 2019 trials showed the disease caused grain yield losses of up to 13 per cent, or half a tonne per hectare. This level of loss was observed in the Yallara oat variety, which is rated susceptible to very susceptible (S-VS) to RLL.

“The Yallara oat variety was the most susceptible to grain yield losses, followed by Mitika and Williams,” he says.

Based on these findings, Dr McLean urges growers to opt for oat varieties with a minimum RLL resistance rating of moderately susceptible (MS) to help minimise grain losses. There are no fungicides registered for RLL control in oats.

However, the varietal options are limited since most current commercial oat varieties have varying degrees of susceptibility to RLL, he says.

“The majority of varieties are susceptible to Red leather leaf, especially the Yallara, Mitika and Wintaroo varieties.

“Some varieties, such as Bannister, Kowari and Forester, have better resistance that can help reduce the risk of yield losses.”

Resistance ratings for current and pre-release oat cultivars are being reviewed in RLL screening nurseries established as part of GRDC-invested National Variety Trials (NVT) in 2019. 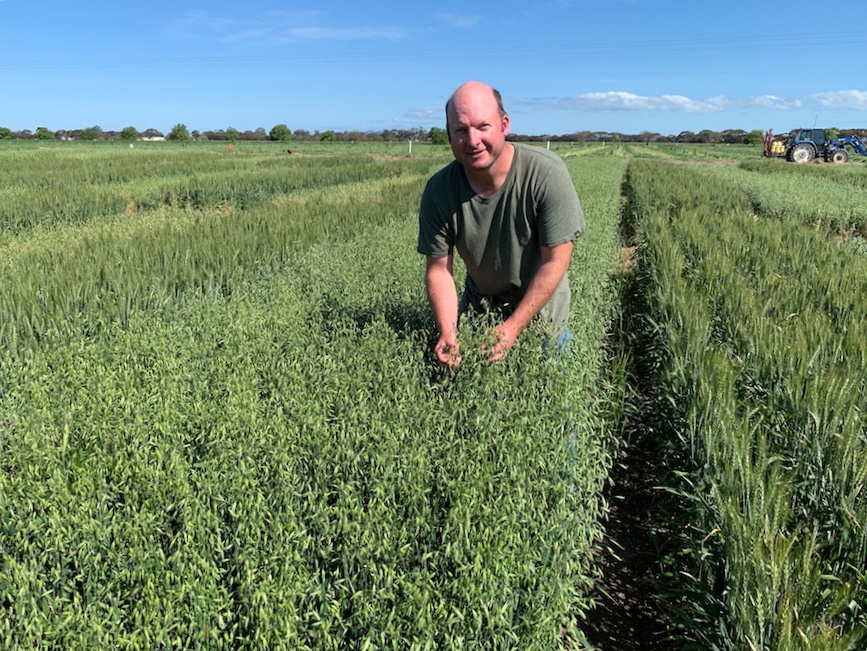 But Dr McLean adds that the trial findings, to date, indicate the RLL susceptibility of different cultivars and, in turn, yield losses can be variable depending on seasonal conditions.

“Grain yield losses also appear to be influenced by crop maturity and phenology, not just RLL resistance,” he says.

“For example, the trials suggest that varieties which grow rapidly in spring can help avoid infection on the upper leaves that contribute most to yield.”

He says significant yield losses observed in the 2019 trials occurred where plants showed more than 10 per cent infection in the top three leaves.

He suggests growers monitor oat crops for RLL infection during late winter at tillering and early stem elongation. At these stages of crop development, the disease begins to express as “blue blotches that develop into spreading lesions, which eventually become red and leathery in appearance”.

He suggests growers manage the infection by avoiding sowing oat crops into the stubble of a previous oat crop. “Oat stubble is the main source of infection. However, Red leather leaf can also be seed-borne, so it is important to monitor crops, as it is difficult to know if seed is from a clean source.”

"The disease requires leaf wetness for a minimum of six hours to establish and is favoured by temperatures below 16∞C.” 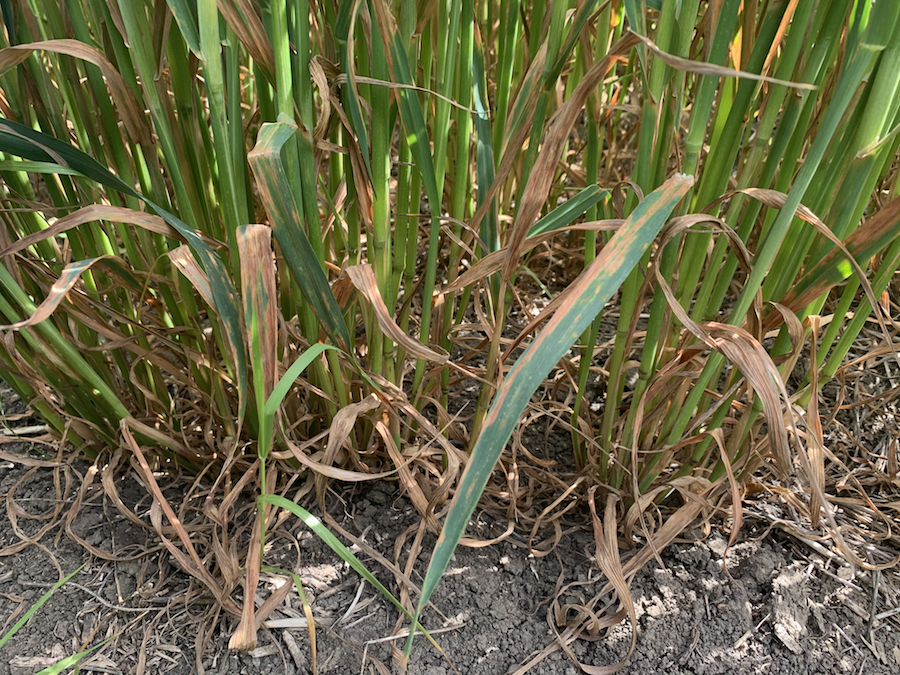 Red leather leaf disease can cause grain yield losses of up to half a tonne per hectare and hay yield losses between 0.5 and 1t/ha. Photo: Mark McLean, Agriculture Victoria

AgriFutures-invested trials at Horsham and Inverleigh also investigated the oaten hay yield losses caused by RLL infection in the 2019 and 2020 seasons.

Dr McLean says hay yield losses between 0.5 and 1t/ha were recorded in varieties rated susceptible to RLL at the Inverleigh trials in 2019.

However, the 2019 trials at Horsham found RLL infection had no significant effect on hay yields. This is most likely because dry spring conditions limited infection later in the season, he says. In these low-disease-pressure conditions, the severity of infection was variable between cultivars and plant height and stem thickness were also significantly reduced.

The trials at Horsham were run by Agriculture Victoria’s field crop pathology team, while the trials at Inverleigh were run by the Foundation for Arable Research Australia.