Whether it be bags, bunkers or pits, many growers may need to revisit temporary on-farm storage options this season.

Thanks to good subsoil moisture across parts of eastern Australia, grain plantings are on the rise and with that may come the need for more grain storage capacity on-farm this harvest.

"On-farm grain storage options have not been high on the agenda for many growers across the eastern states in recent years, but it is hoped that changes this season. It is important to be prepared," she says.

"Given the financial impact and reduced cashflow of the past three years, expensive permanent infrastructure may not be feasible for many people. So, this is an opportunity to evaluate temporary storage options such as bunkers, grain bags, sheds or even pits."

Chris Warrick, who manages the GRDC investment in National Grain Storage Extension, says all options have pros and cons. "What might be a good option for one farming enterprise might not suit another. Likewise, deciding on when a certain option is a good one or not is important too," Mr Warrick says.

Typically, bags have a storage capacity of about 240 tonnes, are single-use and best for short-term storage. They cost $4/t, with other costs including loading and unloading equipment and site preparation.

Bags should be filled on a firm, compacted pad where water will drain away. When full, bags should be regularly and vigilantly checked for cuts, nicks and holes and patched with silicon or bag tape.

"Unless the bags are placed on, or near, an all-weather access road, they can be difficult to unload or even vulnerable to flooding. The pad site needs to be large enough for trucks and machinery to unload and allow access in wet conditions." 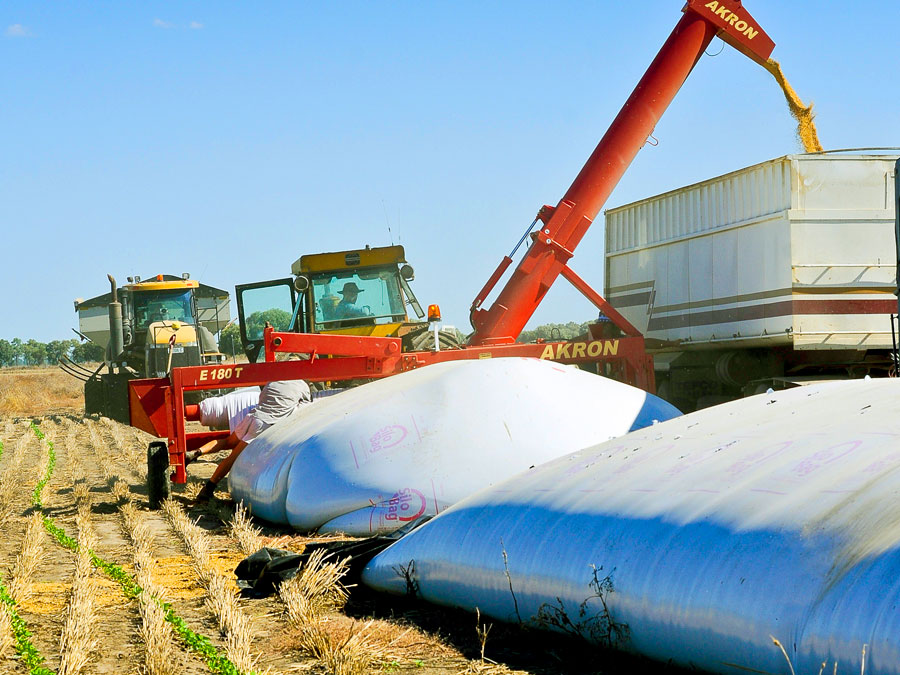 Wheat being unloaded from temporary storage as mungbeans emerge in the wheat stubble. Photo: Brad Collis

Chris Cook from 'Trenmore', south of Condamine in Queensland, has been using bags for about 15 years.

"We generally put them down every season for about six months, but we have stored grain in them for longer."

Chris finds the option to store grain in bags helps with marketing and initially tried them when sorghum prices were low. "When we did come to sell, sorghum had doubled in value. We decided then that bags were the way to go. Once you have the set-up right, it is a relatively cheap endeavour." Through trial and error, he says he has learnt that bag quality is key. "Poorer-quality bags can split. We have had that happen and we were then busy unloading and reloading into the night."

Site preparation and cleaning as you go are also important. "It is a little thing but will pay in terms of not attracting vermin to scattered grain." He also suggests placing bags in a high-traffic area, where they can be checked as part of a daily routine. "Check for mice, bird, or kangaroo damage. Foxes can also scratch holes in bags." As soon as he sees damaged bags, he covers the area with tape to prevent further issues.

For those considering bags, Chris says hiring loading and unloading gear is an option. "At least ensure you have a bag-filling machine hired for harvest time. You can then judge when you will unload the bags and hire the machine needed for that."

Although sheds are not often viewed as temporary storage, Mr Warrick says they can provide an option in a big harvest or to aid logistics. Sheds for grain storage require suitable floors, plus roofs and walls designed for the task. Consider the shed's suitability to be fumigated effectively using quality tarps over the grain stack. Look to manage any potential contamination or damage to grain from birds, mice, livestock or storms.

Aeration is difficult due to the open design, but customised ducting and air manifolds can be developed to aerate grain. One of the biggest drawbacks is the difficulty getting grain in and out. Using an auger or belt conveyor to fill the shed from the truck is common practice. For out-loading, some operators use bulk-handling buckets on front-end-loaders or tele-handlers to fill direct into trucks.

Justin Ruwoldt, who farms near Horsham in Victoria, uses sheds to maximise on-farm storage options. At 'Glenvale', Justin is responsible for storage, marketing and logistics and is passionate about helping other growers make on-farm storage choices. His storage options include numerous shed options, plus a series of silos, helping to segregate grains into various grades.

Justin says there are a number of important factors to consider with shed storage, including location, temperature control, fumigation and pest control. He uses an auger to in-load the grain and places aeration ducts in at the same time. He also uses a daisy chain temperature probe. "I check it daily at first and then when it reaches the right temperature, I check it regularly and am alerted to major changes.

"There are tricks to storing grain in a shed. It is not just a matter of putting the grain in. You need to be able to sample it, look after it and think about how it will be marketed." Athough it sounds simple, it is important to clean as you go. "We have a mice infestation in the Wimmera now and it is key that we keep sheds clean and vermin away."

Bunkers or pads can be as simple as a pile of grain on the ground, or a purpose-built site with concrete retaining walls. Always aim to minimise the risk of grain losses.

Stored grain specialist Philip Burrill, from the Queensland Department of Agriculture and Fisheries, says key features for bunker storage are site drainage, plus a well-compacted surface for loaded trucks and machinery. Bunkers require careful site preparation, labour to move large tarp covers and suitable machinery to move grain on and off the stack.

"The site needs to be above flood level and have all weather access," he says.

"Compaction and shape are key. For example, across the profile, it should look like a wide roadway, that is, it has a nice camber, falling away to both sides from the centre line for drainage. Include a gradual slope down towards the front of the bunker so rainfall drains away from the grain face."

Costs depend on site preparation, size and wall type. Reputable tarp suppliers can help calculate a bunker's dimensions for a given tonnage and tarp sizes required. Options for side walls include having none, forming small earth walls, or using purpose-built, low concrete walls with clamps to hold/seal the tarp. Aeration is possible. For out-loading, a mobile auger fitted with a cross sweep is an option. Front-end-loaders, tele-handlers or a grain vacuum machine can be used. Research and plan ahead

Perry Magann works with large-scale bunkers and pads as part of his operations role with the Carpendale Group, based in Goondiwindi, which has 90,000t of bunker storage plus 8000t of silo storage. Despite the size of Carpendale's operation compared to on-farm bunkers, Perry says the same principles apply.

"Do some research and plan ahead. Don't be afraid of this temporary storage option."

As a starting point, he suggests talking to a tarp manufacturer.

"Find out what size tarps they have and, importantly, what is available."

He says this measurement will dictate bunker size. From there, storage capacity can be calculated, helping growers make informed decisions about feasibility.

Carpendale's bunkers are 30 metres wide and, depending on variables, can be aerated and fumigated. They utilise three different wall types - earthen, tin and concrete.

Bunkers are filled with an auger set up with a bunker attachment, while a wheel loader is used to move grain off-site. Determining whether a bunker is part of a long-term storage strategy or a shorter-term plan is a key consideration.

Underground pits are an effective, low-cost method for long-term grain storage. Their most common use is for storing livestock drought feed reserves on farms. Feed grain has been recovered in good condition after more than 10 years stored in this way. The pit should be located on a well-drained site above the water table.

Immediate surrounds should be graded to prevent rain pooling on the site. Aeration cooling in pits is not a known management tool. The earth's stable, relatively mild temperature helps bring grain temperature down over time.

Filling can be done either by driving into the pit or using an auger from the side. After filling, the grain is covered with plastic sheeting and soil for protection. An initial layer of sand will prevent rocks or hard clods from damaging the top cover. The soil should be shaped to aid run-off.

The main drawback is the difficulty in removing grain - all the covering soil must be removed without contaminating the grain. Grain vacuum machines are ideal for emptying pit storages and allow much easier final clean-up. Mobile augers or belt conveyors with fixed and guarded cross-sweeps, or a front-end loader, can also be used.

NSW grower Andrew Freeth, who farms at Collie, west of Gilgandra, uses temporary pit storage as a drought buffer. However, Andrew says it is important to consider the reasons behind this option. For his family, storing feed grains in pits is a drought management tool.

"We have stored feed grains, like barley and oats, in pits for our own use for periods longer than 12 months."

The Freeths have also recently used fine-chopped sorghum silage stored from the 1990s. "It had deteriorated slightly, but the cows ate it." Their pits are located on ridges in clay soils, meaning the bottoms or sides are not typically lined. They are also filled to form a peak.

"We dig a pit and fill it with grain from the chaser bin until it peaks up. It looks a bit like a bunker. We do that so any water that falls will run off from the sides. We then run plastic over the top." A front-end loader is used to unload the grain. Andrew says it is important to be prepared before starting. "Get grain moisture levels down before you fill the pit. There is not much moisture down in the pits and, if it is well-sealed, there is no oxygen. That means it is not a conducive environment for weevils."

Despite the varied nature of temporary storage options, pests and insects can be managed. Fumigation with phosphine is an option in bags, but prevention is better. Keeping vermin away with fencing, baiting, site selection and clearing can lead to fewer animals and birds making holes in the bags.

Given the open nature of most sheds, pest and insect control is challenging. But thorough hygiene, a structural treatment before harvest, and aeration cooling (combined with a protectant, for cereal grains in eastern states only) reduce the impact of insect infestations.

Finally, where possible, later in the season, aim to move remaining stocks of grain held in higher-risk temporary storage into any available sealable, cone-based silos. This assists with future insect pest fumigations and simplifies outload for sales.