SARDI's Jeff Paull speaking at the release of the Group B herbicide-tolerant faba bean PBA Bendoc in 2019. Over-reliance on this herbicide group means that varieties resistant to other modes of action are urgently needed to diversify herbicide usage patterns and protect the longevity of this technology.
Photo: Katherine Hollaway

High prices and the need for diversification in increasingly intensive cropping systems have driven the rapid expansion of the Australian pulse industry over the past decade. Weed control remains one of the major constraints to pulse production because pulse crops are inherently poor competitors and can suffer significant yield losses at even small broadleaf weed population densities.

Pulses also have limited safe or suitable herbicide control options as well as sensitivities to residues of several commonly used herbicides. Without new technologies or alternative methods for effective weed control, pulses will struggle to remain a profitable option.

With GRDC investment in 2010, the South Australian Research and Development Institute (SARDI), together with the University of Adelaide, explored a range of methods to enhance weed control options in pulses. The development of novel herbicide-tolerance traits in crop species has become an innovative way to expand options, allowing old chemistries to be used in new ways.

This was achieved in pulses through mutagenesis methods, generating a new source of diversity in adapted backgrounds. Initially focusing on lentil and faba bean, the project later grew to include chickpea in 2014 and field pea in 2017. Over the past 10 years, these novel germplasms have been screened over hundreds of hectares, with hundreds of selections validated and quantified through a range of controlled environment and field screening trials to identify suitable traits for the Australian pulse industry.

Target-site tolerance to Group B herbicides has been developed in a range of commercial crops including wheat, canola, barley and lentil. With these traits now available in most phases of the cropping rotation, urgent action was required in the pulse phase to allow adoption and rotation into areas where crops are limited by weeds and/or soil herbicide residues. Target-site tolerance has now been developed in faba bean, chickpea and field pea, with the new faba bean variety PB Bendoc released in 2019 (Figure 1). 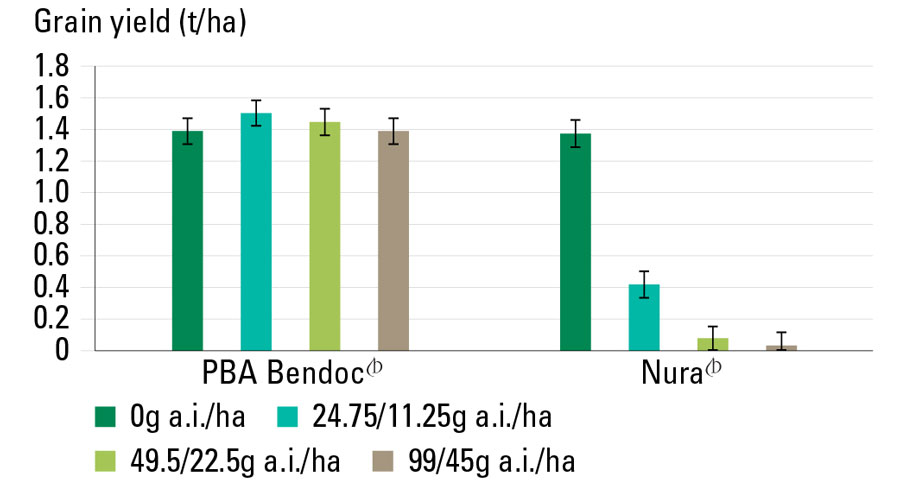 This variety has been popular, selling out in 2019 and 2020 seasons. The Australian chickpea breeding program is anticipating it will release a Group B tolerant variety within the next three to five years, with field pea later (five to 10 years).

However, over-reliance on this herbicide group due to high levels of adoption of this technology has already led to the development of Group B resistant weeds, including several broadleaf weeds (for example, milk thistle and prickly lettuce). Other modes of action are urgently needed to diversify herbicide usage patterns and protect the longevity of this technology.

Group I (synthetic auxin) traits have now been developed in lentil, faba bean, chickpea and field pea. These traits offer selective control of several problematic broadleaf weeds in pulse production as well as a completely different mode of action in the pulse rotation.

These traits have shown high levels of field tolerance across all four crops with selectivity to the picolinate herbicides such as clopyralid (Figure 2). Some Group I-tolerant biotypes have been identified in each crop, and further work during 2020 aims to look more closely at adaptation and potential fitness penalties in order to identify the best biotypes for growers. 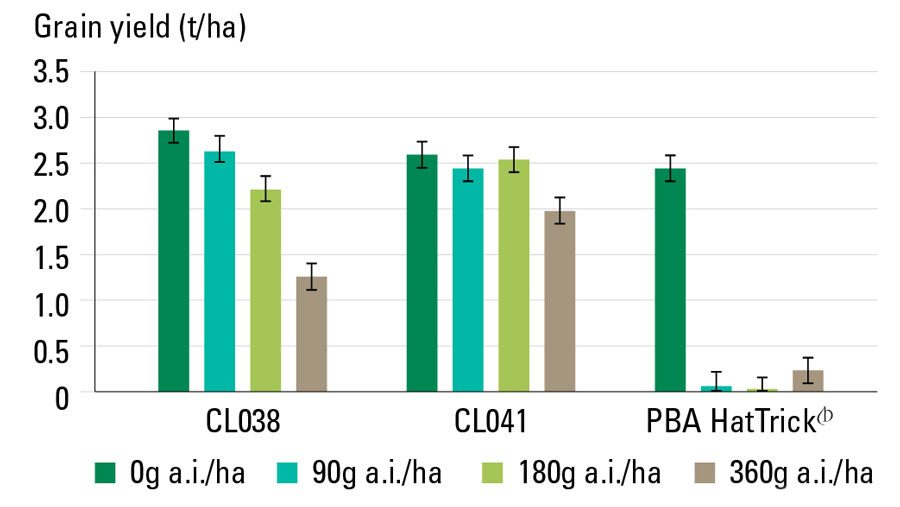 Metribuzin is a broad-spectrum herbicide that is registered for post-sowing-pre-emergent (PSPE) use in lentil. However, it is known to cause significant damage under a range of environmental and soil conditions. While this trait presents an exciting opportunity for growers, the tolerance mechanism results in reduced photosynthetic efficiency, giving rise to a significant fitness penalty.

The herbicide team is working closely with breeders to minimise this fitness penalty; however, progress has been much slower than for Group B traits. This trait also confers exclusive tolerance to metribuzin, with no cross-tolerance to the other commonly used Group C herbicides.

Similarly, several lines were identified with low levels of improved tolerance to Group C chemistries within the faba bean breeding program, which has been rapidly incorporating and screening for further Group C tolerance. Similar to lentil, these low levels of tolerance will not result in any changes to registrations, but will provide growers with higher levels of crop safety to registered PSPE applications.

As well as development of these novel traits, high-throughput diagnostic molecular markers for each trait have been developed. Gene-based DNA markers have been identified for most traits and are being used to screen thousands of plants in breeding programs to facilitate incorporation of herbicide tolerance into elite breeding material and new varieties.

The combination of marker-assisted selection and accelerated single-seed-descent techniques, in collaboration with the University of Western Australia, has enabled breeders to advance some traits from first field identification to stage-two field trials in as little as five years.

Further work will fully characterise the molecular mechanisms of novel Group C and Group I traits to support chemical registrations and to ensure that new varieties are matched with well-informed management advice.

The use of multiple modes of action is critical to delaying the onset of herbicide resistance in weed species and will be particularly important for the management of Group B-resistant weeds. The combination of three different modes of action (Groups B, C and I) would offer robust and sustainable weed control options for pulses with a lowered risk of developing herbicide-resistant weeds.

However, neither Group C nor Group I traits developed in this project have ever been reported in any commercial crops. Further work, including exploring genetic control, incorporating traits into breeding programs and fitting these traits into farming system agronomy, is required to commercialise this technology.

As chemical usage restrictions tighten worldwide, development of any novel herbicide-tolerance traits will require greater ongoing stewardship and due diligence from growers, industry and researchers. Tighter regulations may result in fewer new chemistries being brought to market and some current chemistries becoming restricted, which will require innovative solutions across the board to ensure Australian production systems remain profitable and sustainable well into the future.