The variety features short stature and strong straw, the best forms of resistance against lodging, and has come from the GRDC-invested national Durum Breeding Australia (DBA) program's northern node, in Tamworth.

"Through EGA Bellaroi (PBA) and then DBA Vittaroi (PBA), our germplasm has given the irrigator the best ability to produce the top durum grade of ADR1, and with best management practices," Dr Kadkol says. "DBA Vittaroi (PBA) is yielding as high as 12 tonnes per hectare.".

DBA Vittaroi (PBA) is comfortably achieving yields of 10t/ha, as well as making ADR1 specifications, which include a minimum 13 per cent protein and maximum 5 per cent screenings.

The DBA program has irrigated trials in four locations:

Griffith-based consultant Barry Haskins is running the Hillston trial. He says benchmarking undertaken by his AgGrow Agronomy and Research consulting business has shown durum to be the most profitable of all irrigated winter crops. 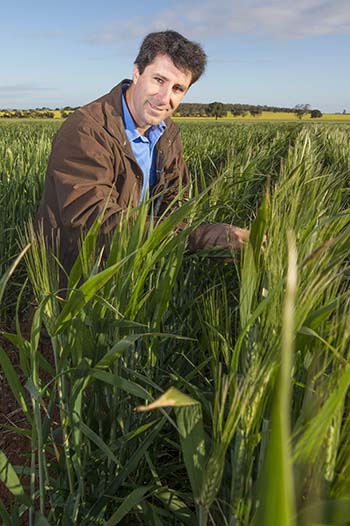 "It's yielding around 2t/ha more than bread wheat and, in dollars-per-megalitre terms, it's continually ranking well above most other crops, both winter and summer," Mr Haskins says.

"Irrigators would be disappointed if they weren't achieving $300 to $400 per megalitre, and durum is commonly at the top end of these figures with the benchmarking we've done."

It's yielding around 2t/ha more than bread wheat and, in dollars-per-megalitre terms, it's continually ranking well above most other crops, both winter and summer.

While bread wheats suited to irrigation are ideally planted in May, durum can be planted in June, which Mr Haskins says makes it an appealing crop to follow autumn-picked Riverina cotton.

Dr Kadkol says not all durum varieties are able to put nitrogen into increasing grain protein while maintaining a high grain yield and low screenings, a trait for which varieties from the Tamworth program are selected and developed.

"Going back five or 10 years, we didn't have the runs on the board to grow durum crops like that, as the varieties would lodge if we pushed them too hard with nitrogen. We were always under-fertilising, or applying fertiliser at the wrong time, and that took away the profit that the crop could generate."

Mr Haskins says the improved strategy includes balancing the nutrition plan according to soil tests and paddock expectations, starting with an adequate base level of nitrogen and applying nitrogen at a rate of 25 kilograms per hectare for every one tonne of durum in the target yield.

Irrigation scheduling is also extremely important and Mr Haskins says durum can now capitalise from later water than bread wheat because of its large grain size.

"Agronomically, we've nailed how to grow durum on irrigation, and it can supply a feed market and a durum market," he says.

Dr Kadkol says the project is working on adapting durum to soils with low pH and aluminium toxicity to turn it into an option for dryland growers in southern NSW. CSIRO's pre-breeding program, run by Dr Manny Delhaize, which has transferred some aluminium-tolerant genes from bread wheat into durum, is also playing a part.

On acidic soils, durum has traditionally carried a yield penalty compared to bread wheats, and Mr Haskins and Dr Kadkol believe varieties in the pipeline hold promise to narrow the gap. In the northern region, dryland durum is typically grown on clay vertosols with a pH of more than 8.0, which contrasts with the higher acidity of soils in southern NSW.

"With the varieties we have now, durum needs a pH of at least 6.0 to perform well," Dr Kadkol says.

"Our germplasm specifically needs to adapt to lower pH, but we haven't got the results just yet."

DBA is also running additional trials at locations, including Cowra and Beelbangera near Griffith, to identify genetics that can cope with lower pH in dryland conditions.

In the 1940s, the NSW Government started the durum project that has delivered many successful varieties to the grower community - which now extends north and south from durum's traditional heartland on the slopes and plains of northern NSW.

Durum is also a significant crop in South Australia and pockets of Victoria, supported by the southern node of DBA located at the UA, which has bred DBA Aurora (PBA) and DBA Spes (PBA).

DBA Aurora (PBA) is the main variety grown in South Australia, but DBA Vittaroi (PBA) is also starting to be grown in the Mid North and Yorke Peninsula regions.

Australia typically produces 500,000t of durum per year, but very low 2018 production in northern NSW - due to a lack of planting rain - and a dry outlook for 2019, are likely to have reduced the national figure to about 250,000t.