Stirling Roberton, from the Centre for Sustainable Agricultural Systems at the University of Southern Queensland, says his research - presented at the GRDC's 2020 Goondiwindi Research Update - showed it was more beneficial to use soil samples to develop continuous VR maps, compared to using zones or blanket rates.

The net benefit could be as high as $100,000 compared to a blanket-rate approach.

The results come from work to understand how many soil samples are needed across a paddock in order to provide valuable VR soil amelioration advice.

Soil amelioration - the process of identifying and alleviating soil constraints such as compaction, salinity, sodicity, acidity and alkalinity - can be expensive.

"This is due to wasted amendments from over-application and lost yield potential from under-application," he says.

Yet, because soil constraints are often highly variable at the sub-paddock scale and can interact with - or operate independently of - each other, managing them spatially can be extremely difficult without sufficient soil information.

But how much data? That was the question Mr Roberton began to explore - working on balancing the cost of gathering data with its potential impact.

"This research aimed to identify the economically optimum sampling density for soil amelioration, taking sodicity as an example," he says.

His study compared the economics of under or over-applying gypsum for three application methods of:

"It is where every 12-by-12-metre pixel can be managed independently within the paddock," he says.

The study investigated treating sodicity to 20-centimetre and 60cm depths.

Mr Roberton says that although treatment to 60cm is not currently possible with commercial equipment, it was crucial to investigate the possible yield responses and provide estimated cost-benefits for equipment investment.

This research aimed to identify the economically optimum sampling density for soil amelioration, taking sodicity as an example. - Centre for Sustainable Agricultural Systems at the University of Southern Queensland researcher Stirling Roberton

On a 100-hectare broadacre site under a cereal/pulse rotation, 300 soil cores on a 60x60 metre grid (three cores/ha) were taken.

They were analysed for moisture content, bulk density, texture, pH, electrical conductivity and exchangeable cations (calcium, magnesium, sodium and potassium) at depths of zero to 10cm, 10 to 20cm, 20 to 40cm, and 40 to 60cm.

It was then a case of assessing how many soil samples would be needed to achieve this amelioration rate. 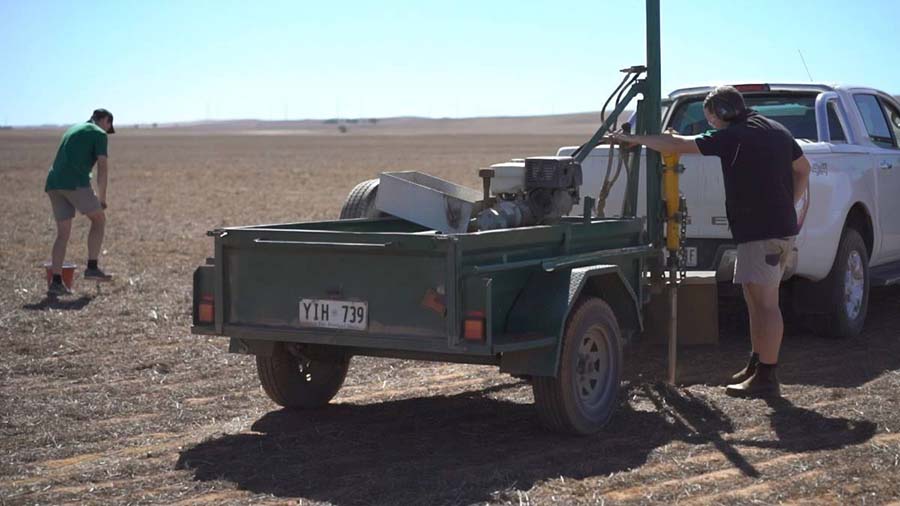 How many soil samples are too many to be uneconomic was part of the study undertaken through this research project with GRDC investment. Photo: Daniel Koulouris, AgCommunicators

To do this, gypsum recommendations at sampling densities of 10 to 300 cores (0.1 to three samples/ha) were simulated and compared to the original gypsum requirement maps.

This indicated how wrong the gypsum recommendation was (in terms of over and under-application) at varied sampling densities using either a blanket, zone-based or continuous VR approach.

The cost of over-application was calculated by multiplying the total over-applied tonnage by the on-farm gypsum price ($110/ha).

The cost of under-application was estimated using a site-specific yield model.

It estimated gypsum's spatial yield responses and then the lost yield potential of under-application.

The cost of this under and over-application was then compared against the cost of sampling at each density to identify the economically optimum number.

So, what is the economically optimum sampling density?

For this site, it seemed to be between 20 and 50 - depending on the treatment depth.

Mr Roberton found that as the sampling density increased to 50 (0.5 cores/ha), the largest net benefit of the application can be achieved - but only if a continuous VR approach is used.

At sampling densities below this, the costs associated with application errors exceed the sampling cost.

At sampling densities above this, the sampling cost outweighs any benefit of a spatially improved recommendation.

The research also calculated the return on investment for applying gypsum using a continuous VR approach at the economically optimum sampling density of 0.5 cores/ha.

Mr Roberton says that in the first year, the sampling costs associated with taking a continuous VR approach increased, due to an increased sampling requirement.

However, the estimated cost-recovery period was reduced to 10 years, as opposed to 13 years for a data-limited blanket-rate approach - such as one bulked sample for the paddock.

"Furthermore, the net benefit of the continuous VR approach was estimated to be approximately $100,000 over the blanket-rate approach, for treatment to 60cm on this 100ha site over a time period of 20 years," he says.

Mr Roberton says there are a lot more "unknowns" as researchers head deeper into the profile.

"So, we are less confident in the numbers we have estimated for subsoil treatment than surface layers," he says.

"Treatment to 20cm is still of great benefit, however, the net benefit of approximately $25,000 is obviously lower. This is because a smaller volume of soil at a lower investment is treated."

To help highlight the benefits of re-engineering profiles where substantial investment is needed, as well as the potential for substantial returns, Mr Roberton says it is important to also consider the 60cm results.

"I hope we will see a commercial-trial-scale deep placement trial soon," he says.

Mr Robertson says it is important to recognise that the work showed the economically optimum sampling density for any given paddock is site-specific.

Future work aims to integrate this information with other field variability layers to inform optimum sampling needs at unvisited sites.

NOTE: The research undertaken as part of this project was made possible by the significant contributions of growers through both trial cooperation and GRDC support.