Deep ripping has been the standard remedy for years to loosen hardpans and improve crop productivity.

However, where hardpans occur in deep sandy soils, particularly in Western Australia, there has been growing interest in the use of topsoil slotting, with inclusion plates attached to the rear of deep rippers to further increase crop performance.

Hardpans are distinct layers of dense soil, which are largely impervious to root growth.

Within agricultural soils, hardpans can occur through natural settlement and cementation and can be caused by machinery traffic, often to depths of up to 55 centimetres.

For the greatest efficiency, the top of the inclusion plate needs to be working at a depth equivalent to the greatest depth of topsoil organic matter.

With a drying climate and increasingly heavier machinery, these hardpans are becoming more problematic.

Their management is often compounded by other soil constraints - non-wetting soils and subsoil acidity and sodicity.

For these reasons, growers in WA, with researchers from the WA Department of Primary Industries and Regional Development (DPIRD), have been experimenting with inclusion plates together with deep-ripping tynes.

Topsoil inclusion plates are positioned just below the soil surface on the rear of the ripper tyne and hold open a slot behind the tyne, allowing topsoil, which may have been ameliorated with lime or gypsum, to fall into the slot and be buried to depth.

Deep rippers are now expected to operate to a depth of 55cm and the addition of the inclusion plates comes with disadvantages, the major one being the increase in draught force required to pull the ripper. 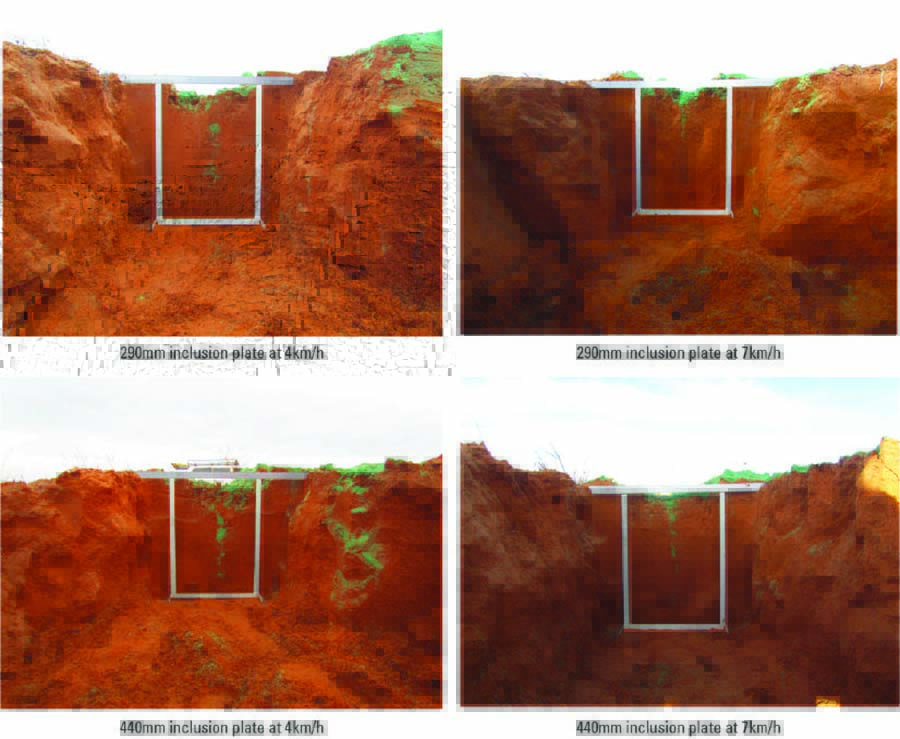 For example, a 24 per cent increase in draught force was measured when plates were fitted to a trial ripper operating in yellow loamy earth at Merredin in 2017. This increased tractor load resulted in additional fuel use of 3.7 litres per hectare.

Where draught was measured in red South Australian Mallee sand in 2019, it was increased by up to 40 per cent at four kilometres per hour.

These tests were conducted with vastly different configurations of inclusion plates and highlight the effect that inclusion plate design and operational setting can have on the force required.

With GRDC investment managed by the WA DPIRD, engineers at the University of South Australia are using novel discrete element method (DEM) simulation techniques to understand the effect on both draught force and topsoil burial of these configurations and to examine new inclusion plate designs.

Using DEM and scaled model soil bin experiments, the team considered the effect on draught requirements and topsoil distribution of forward speed, depth, width and length of inclusion plate, together with the approach angle on the leading face of the plates.

These simulations were later extended and validated in the field, specifically focusing on topsoil burial.

DEM simulations showed that as speed increases, so does draught. This confirmed growers' observations of increased tractor load and fuel use. At a faster speed, less material was buried at depth with the majority of topsoil remaining in the top of the profile (see Figure 1).

Further simulations showed that as the inclusion plate works deeper from the soil surface, draught increases and topsoil inclusion reduces due to the nature of backfill from the surface.

For the greatest efficiency, the top of the inclusion plate needs to be working at a depth equivalent to the greatest depth of topsoil organic matter.

For example, for optimal amelioration of subsoil pH, the topsoil needs to be limed and this lime needs to be distributed through the profile.

If the inclusion plates are working too far below the depth of lime in the topsoil then this lime is going to be buried shallower and will not come into contact with deeper pH issues.

This suggests that the inclusion plate should be placed at a depth relative to the intended burial required and be controlled over ripping depth changes.

Inclusion plate height, the distance it runs down the back of the ripper tyne (see Figure 4) affect both draught and depth of inclusion. As the height of the plate increases so does draught, due to a narrower loosened area near the maximum ripping depth.

Topsoil is buried to the depth of the plates at slow speeds, but this is not the case for faster speeds (see Figure 2).

Higher plates bury topsoil deeper and shorter plates shallower, so the height of the plates needs to match the depth to which the topsoil is required to be mixed.

If tractor horsepower is limiting, a compromise must be made between the height of the inclusion plate, the depth below the surface and the maximum depth of desired amelioration. Figure 5: Dark organic stain in the soil to 45cm indicating topsoil burial by topsoil inclusion plates on yellow loamy sand. Universal indicator sprayed on to the pit face indicates the lime in the topsoil (purple) and the acid band through which the topsoil passes (yellow/orange) approximately between 20 and 45cm. Source: DPIRD

As the width or distance between the inclusion plates increases, the topsoil inclusion usually increases. More topsoil is buried in the upper layers of the profile but the volume transferred to the lower soil profile does not change. This increased burial into the top layers comes with the price of increased draught force.

Increasing the side wall length of inclusion plates is an effective means of improving burial without increasing draught, especially at higher speeds, as more topsoil is buried to the lower layers with longer plates. The DEM simulation proved this as increasing plate length by 60 per cent had negligible impact on the draught forces. 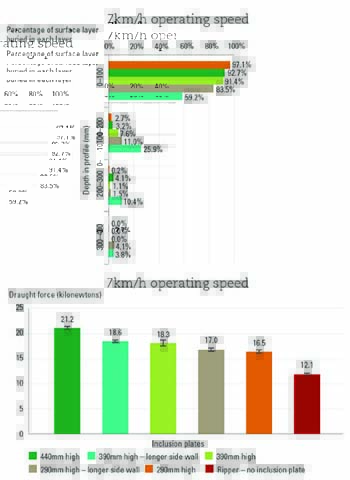 Figure 3: Results from inclusion trials in SA, A) percentage of topsoil burial to depth with a range of inclusion plates, and B) associated draught forces for these inclusion plates. Source: UniSA

In field trials carried out in South Australia, doubling the length of plates increased draught by 2 to 3 per cent but resulted in approximately 40 per cent less topsoil on the surface and more than a 10 per cent increase buried in the bottom half of the ripped profile for a ripping depth of 600mm and speed of 7km/h (see Figure 3).

These simulated inclusion plate modifications, which were tested independently, can guide plate design.

To this end, field-scale simulations with modified plates were undertaken with lengths of 1.5 times and double that of the standard plates.

At 4km/h and 7km/h, the standard plates were leaving more topsoil in the zero to 50cm layer; it required the longer plates to increase burial of topsoil. This indicates a direct relationship between the length of the plate and the amount they bury with increasing speeds.

As growers have different requirements and capabilities when deep ripping, it will be necessary to customise inclusion plates for each farm business.

Once ripping depth is known, based on the hardpan depth, the depth of the inclusion plate below the surface should be set to suit the topsoil condition and any amendments added, then the plates should be as high (deep into the soil profile) as the tractor can economically pull to achieve best results.

If the speed of operation needs to be increased, then increasing the length of the plate will improve the levels of topsoil included to depth.

Figure 5 illustrates an example of the effective use of inclusion plates. The dark organic stain in the soil to 45cm indicates topsoil burial by topsoil inclusion plates on yellow loamy sand.

Universal indicator sprayed on to the pit face indicates the lime in the topsoil (purple) and the acid band through which the topsoil passes (yellow/orange) approximately between 20 and 45cm.

The key to undertaking deep ripping with inclusion plates is first understanding the depth of hardpan and second to check the quality of inclusion by excavating behind the ripper.