Measured angle of repose (soil at rest) versus discrete element method simulation for (a) cohesive soil and (b) non-cohesive soil.
Photo: UniSA

Field testing is generally used to evaluate the performance of tillage implements.

However, only a small number of implement settings and operating conditions are usually tested, due to the resource-intensive and costly procedures involved.

This leaves gaps in knowledge of the best combinations of implement type, configurations and operating conditions for the full range of possible tillage by soil type by constraint scenarios.

DEM can save significantly on machinery testing costs and speed up development of new and novel tillage equipment.

DEM is a particle-based numerical method for modelling the interaction of granular bulk materials and is readily applicable to soils and grain.

The interactions between the particles are controlled by contact models governed by physical laws and calibrated against fundamental properties such as friction and cohesion.

In the case of soil, the modelled particle size range (7.5 millimetres) is significantly larger than the actual soil particles (0.0625 to 2mm) due to the enormous computing power otherwise required to simulate their movement and contact.

Typical simulations for a plough or spader are of 10 to 20 million particles and this would relate to between 250,000 and 500, 000 particles per cubic metre.

The appropriate soil calibration, as determined by the angle-of-repose test, depends upon the contact forces between particles and soil moisture, and is used to predict an overall bulk behaviour, similar to the real soil.

Figure 1 shows the angle of repose, both measured and DEM-simulated for a cohesive soil, which hardens to a cement-like matrix when dry (such as a fine-textured clay) and a non-cohesive or free-running type of soil whose strength depends on friction between soil particles (such as a coarse textured, gutless sand).

Representative soil samples can be taken from the field and the angle-of-repose used to calibrate the DEM model against each soil condition.

Complementary calibration is conducted to also predict soil forces acting on a tillage machine. Subsequently, full-scale three-dimensional models of tillage implements can be used in the simulations to accurately represent tillage operations. 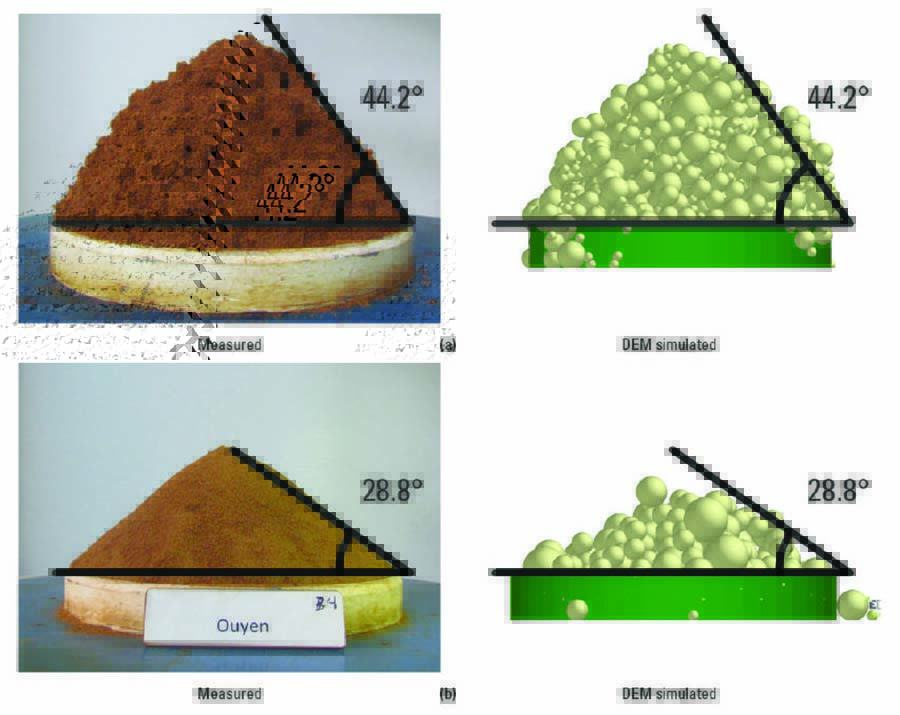 Figure 1: Measured angle of repose (soil at rest) versus discrete element method simulation for (a) cohesive soil and (b) non-cohesive soil. Source: UniSA

To date, the modelling has been most effective on sandy soils. Due to the granular nature of sandy soils, it has been possible to simulate soil/tool interaction for a wide range of soil amelioration machines.

As part of GRDC soil investments in the western and southern regions, numerous DEM studies and field-based verifications have been undertaken to investigate the performance of a range of different scenarios for mouldboard ploughs, one-way disc ploughs, rotary spaders and topsoil inclusion deep-ripping (see Figure 2).

These are important for addressing soil compaction, non-wetting soils and the incorporation of lime and other amendments.

Following DEM simulations, data processing can be used to quantify (in individual layers across a depth profile) the actual proportions of topsoil burial, the uniformity of mixing and the extent of inclusion of topsoil or surface amendments, as well as the draught, vertical and side forces, and torque values where applicable, driving drawbar and tractor power take-off requirements.

This knowledge leads to an improved understanding of the processes involved and enables the development of guidelines to help growers and contractors optimise their machine settings and field operations to improve soil amelioration outcomes.

The DEM approach can assist growers to gain insights into the efficacy of strategic tillage implements and can help manufacturers in their design of implements and recommended operating procedures.

It can be used to optimise machine design features to improve machine performance and reliability across different soil conditions and constraints.

Apart from ongoing improvement to the model, a research gap is to better understand relationships between the quality of the soil and amendment manipulation achieved by various tillage machines and the response in terms of crop biomass and grain yield responses.

This research will better guide machinery R&D and adoption. A current project is piloting this with various spading scenarios to incorporate surface-applied lime and organic matter into acidic and low-fertility sands.