Lime has been the standard ameliorant for acidic soils for many decades in Australia but its efficacy as an amendment in soil has always been compromised by its poor solubility.

Subsurface soil acidity is commonly treated with surface applications of lime but with an amelioration rate of 0.04 pH units per year it would take 25 years for one pH unit increase in subsurface soil. Additionally, as lime is immobile, vertical amelioration is very slow at a rate of one centimetre per year.

This is further compounded by a soil re-acidification rate of 0.09 pH units per year in the surface soil under current farming systems. A further complication occurs when pH drops in soils, aluminium becomes more soluble and toxic to root growth.

To tackle this issue, in 2015 GRDC increased its efforts in addressing subsoil acidity constraints and invested $7.3 million in five-year multi-agency projects in both south-eastern and Western Australia (DAN00206 and DAW00252).

Led by the NSW Department of Primary Industries (DPI), the project in south-eastern Australia drew together researchers and technical staff from NSW DPI, Charles Sturt University, La Trobe University and CSIRO and is investigating the potential of deep placement of lime and other soil amendments, such as soil organic materials, to address the problem of subsoil acidity.

The researchers are exploring both soil changes as a result of various amelioration practices and crop responses to a range of amendments in multiple environments over a number of seasons. 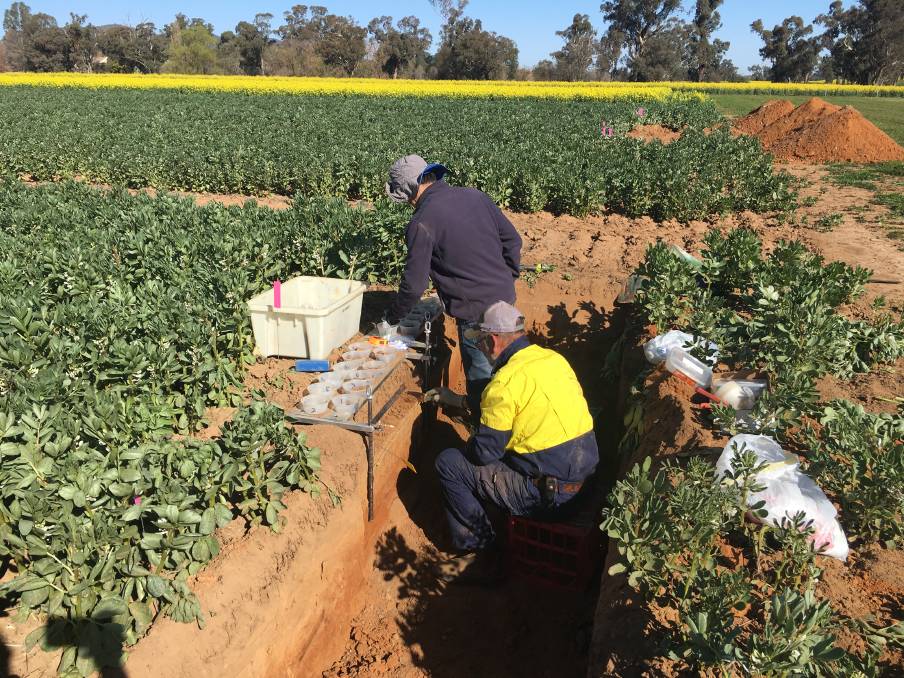 Over the past three years, a number of inorganic and organic amendments were tested for their effectiveness in ameliorating soil acidity under controlled environments and field conditions.

Four in-depth experimental sites have been established to monitor crop responses to amendments and changes in soil chemical, physical and biological properties. Table 1 describes details of the location of the sites, year of establishment and completion, soil type and constraint, the amelioration treatment used and the plant and soil responses from the amelioration treatment.

Results showed that both soil and plant responses were site-specific and season-dependent. There may be synergistic effects of combination of inorganic and organic amendments. They also showed that mechanical incorporation of amendments by tillage needs to be viewed as a long-term strategy.

Lime was found to be the most effective amendment to increase soil pH when compared with other inorganic amendments such as dolomite, magnesium silicate, calcium nitrate and reactive phosphate rock. Deep placement of gypsum had no effect on soil acidity and did not improve grain yield.

Although magnesium silicate is not as effective at increasing soil pH, it could potentially reduce aluminium toxicity and increase phosphorus efficiency. This means that the amendment needs to be carefully matched to the soil constraint requirement.

Organic amendments were found to increase crop yield in the first couple of years simply because they normally contain multiple nutrients that a crop requires. They are not as effective as lime in increasing pH, but reduce exchangeable aluminium significantly. However, they may periodically increase manganese toxicity. Organic matter also appeared to have a synergistic effect on lime, which may have implications for surface liming strategies that involve stubble retention, green or brown manuring and pasture rotations.

The residual value of nutrient addition from reactive phosphate rock and lucerne hay pellets needs longer-term evaluation for economic benefit to be calculated.

These experiments complement other scientific research, including four core treatments, surface lime, ripping only, deep liming and deep organic amendments in the experiment design. The experiments are being undertaken with grower groups to raise awareness of the research and potentially improve adoption of these practices.

There appears to be a synergistic effect of organic matter on lime which may have implications for surface liming strategies that involve stubble retention, green or brown manuring and pasture rotations. NSW DPI researcher Dr Guangdi Li

The 3D ripping machine was used to implement the treatments on all sites. Each site has been monitored for crop responses over three growing seasons. The baseline soil samples and the final-year soil samples have been and will be taken from all eight sites over the life of the research.

The data collected will be used for multi-site genotype by environment analysis to further unravel the complex soil-plant-amendment dynamics.

As the cost of amelioration is a key factor in growers' amelioration decision-making, an economic analytical framework was established to undertake a cost-benefit analysis of innovative approaches to managing subsoil acidity.

There are four scenarios to maintain productivity or to ameliorate soil acidity based on the long-term data from acid soil research over the past three decades in south-eastern Australia.

Soil pH is greater than 5.0 for the whole profile. All crops can grow to their potential. However, the system would need about one tonne per hectare of lime over four to six years (about 200 kilograms/ha/year) to keep the system sustainable without acidifying soil.

Lime can be applied yearly through fertiliser box at seeding, such as prilled lime. Without lime, the soil will be acidified at the surface first, then extended to subsoil, which would cost more to fix as demonstrated in scenario one. 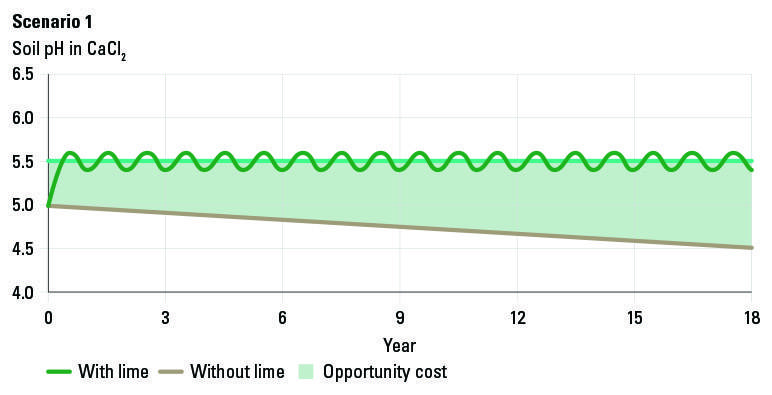 Figure 1: Scenario for liming when there is no acidity problem. Source: NSW DPI

Soil pH is above 4.5 at zero to 10cm, but no subsoil acidity problem. The system would need about 2.5t/ha of lime every four to six years (about 300 to 400kg/ha/year) to maintain average pH around 5.5 without further acidification of surface soil. Lime needs to be incorporated into the top zero to 10cm. Figure 2: Scenario for liming when there is a surface soil acidity problem. Source: NSW DPI

Soil pH is below 4.5 at 10 to 30cm. The system would need a large volume of lime (about 4t/ha) initially to increase soil pH to 6.0 at zero to 10cm, then about 2.5t/ha of lime every four to six years to maintain average pH around 5.5. Lime needs to be incorporated into zero to 10cm, possibly deep-ripped to 10 to 30cm for the best results. Figure 3: Scenario for liming when there a subsoil acidity problem. Source: NSW DPI

Delaying treatment intervals means the subsoil will continue to acidify. With a similar amount of lime, it will have more years with suboptimal production or more loss of production. The recommendation is to act now before it is too late. 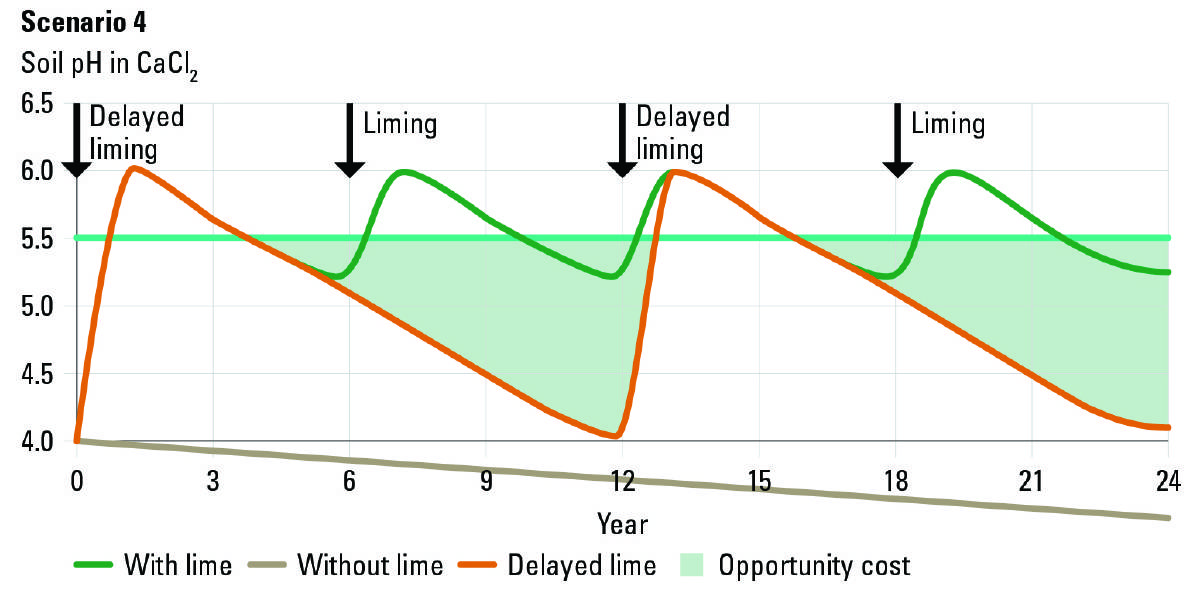 A number of research questions will be asked beyond this project: