Previous research has demonstrated large increases in crop productivity when some organic amendments are placed at depth in constrained clay soils in south-eastern Australia, but to date grower adoption of this practice has been low.

Ameliorating constraints in the topsoil is a lot more straightforward that treating the subsoil, especially if that requires the application of large amounts of organic materials.

Poor adoption of subsoil amelioration is largely due to:

Grower concerns about the financial risk of subsoil amelioration could be addressed by more reliable predictions of where (soil types and regions) and when (seasonal conditions or crop types) it will consistently produce significant yield benefits. To inform this, the mechanisms underpinning a wide range of crop responses on different soil types need to be identified. Initially, these experiments identified the best amendments and rates of application, which were applied in the intensive field trials. Subsequent experiments examined the mechanisms controlling crop response to subsoil amelioration with novel organic and inorganic amendments.

Initial experiments were conducted on two highly dispersive subsoils from western Victoria and southern NSW. In addition, a soil from each location with no apparent physicochemical constraints was used as a 'check'.

Using the soil core procedure developed early in the project, nutrients, organic matter or traditional ameliorants such as gypsum treatments were applied in the centre of the soil cores to identify potential limitations to crop growth.

Chicken manure was the organic amendment of choice as it had consistently produced the greatest crop responses to amelioration in the experiments and earlier field trials. It was applied at a rate of 20 tonnes per hectare (area equivalent) and at a depth of 15 to 30 centimetres in the subsoil and compared to other amendments. Unfortunately, supplies of manures are limited in most grain-growing areas.

Various plant materials were included with a range of carbon to nitrogen ratios, such as legume hay and cereal straw. Nutrient-enriched organic matter (NEOM), which consisted of cereal straw plus added fertilisers, produced responses similar to chicken manure in some cases. 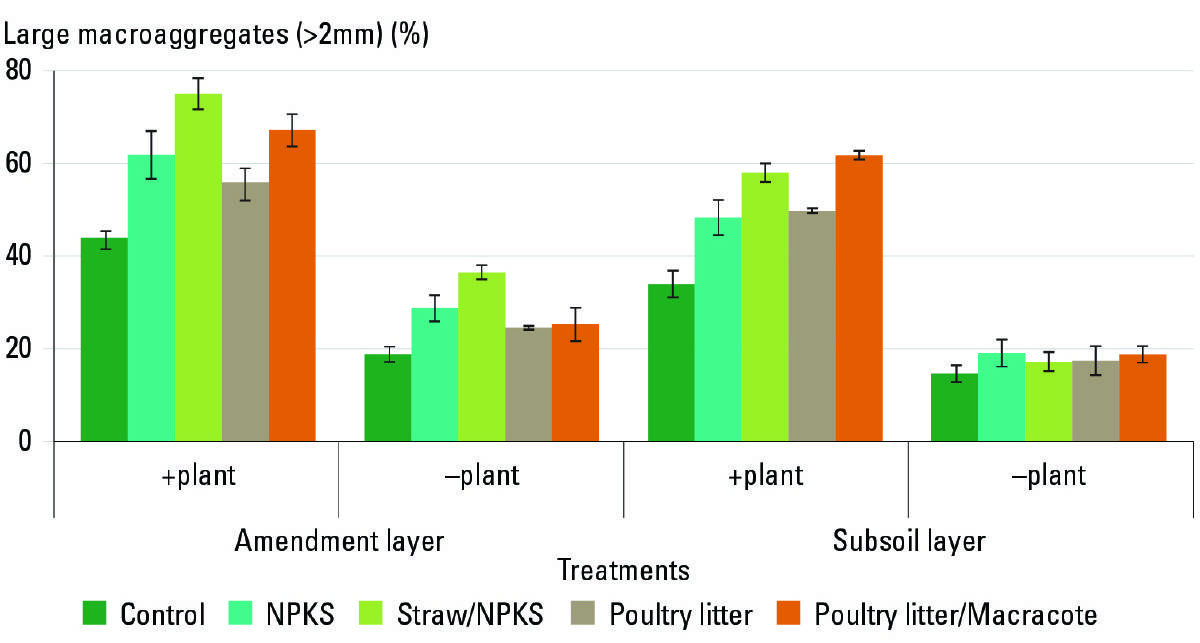 Figure 2: Effect of subsoil amendments and the presence or absence of wheat plants ( plants) on soil aggregation collected at wheat maturity from the amendment and subsoil layers. Source: La Trobe University

In an allied experiment at La Trobe University, the interaction of wheat roots and different amendments on the structure of sodic subsoils was investigated. A clear increase in soil aggregate formation was demonstrated when plants were grown in the nutrient-enriched organic ameliorated soil (Figure 2).

The roots growing through the amendments helped to improve soil structure compared to amendments alone, and even in the absence of the amendments, roots promoted more soil aggregates.

Plant responses to subsoil manuring in dispersive subsoils is complex, with recent research suggesting the primary mechanism for increasing plant productivity is via improved nitrogen nutrition. However, the story is much more complex as pulses, which fix their own nitrogen, respond strongly to subsoil amelioration. Also, improved yields can last for decades - long after additional nutrients contained in the organic amendment have been exhausted.

To date, the largest responses to subsoil amelioration have been in the high-rainfall zone. This may be due to improvements in soil water storage and the crop's ability to access subsoil moisture in spring, but it may also relate to a reduction in temporary waterlogging, which often occurs on poorly structured soils. To help understand this, another experiment examined the relationship between application of NEOM, temporary waterlogging and nitrogen supply.

Unlike previous experiments, a soil with good soil structure was used to minimise the confounding effects of poor soil structure on root growth and the potential for nitrogen loss by denitrification under waterlogging was reduced by using urea treated with a nitrification inhibitor [Entec®]. 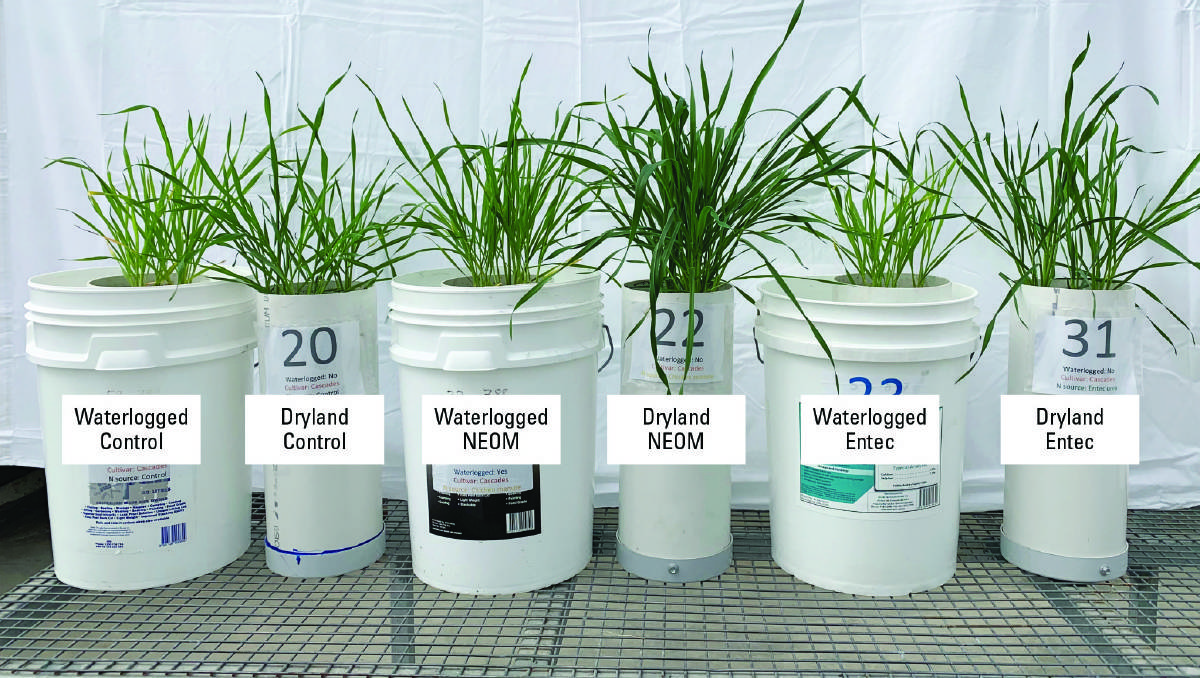 Figure 3 shows the influence of soil treatments - untreated 'control' versus chicken manure (NEOM) or Entec® urea - on the response of wheat to waterlogging (dryland versus waterlogged). Applying NEOM was shown to partially overcome the negative effects of waterlogging on vegetative growth stages of cereals, whereas the two nitrogen treatments were much less beneficial.

Redox probes inserted into the soil in the cores suggest that part of the beneficial effect of applying NEOM was associated with more rapid aeration of the soils following the waterlogging event due to improved soil structure. 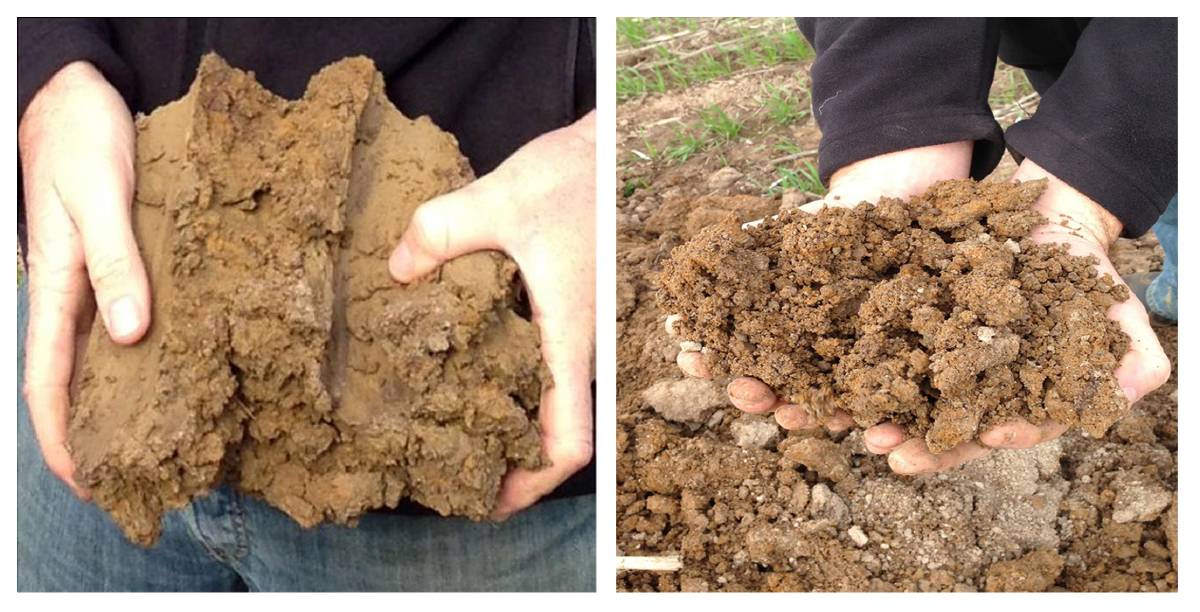 Figure 4: Application of nutrient-enriched organic matter on a soil at Ballan, Victoria (a) before and (b) three years after treatment. Photo: La Trobe University

As part of the project seven large, replicated field experiments were established during 2017 and 2018 in regions representative of the major soil types and environments of the medium-to-high-rainfall zones (Table 1).

Although some sites experienced challenging seasonal conditions over the past two years, promising responses have been measured.

Results from the seven trial sites for the 2018 season are shown in Table 1. These data represent the first year after treatment for five of the seven trials. The nature and extent of plant responses depended upon the amendment and the site, which may reflect either soil or seasonal conditions. Results from Rand, NSW, following amendment application in 2017, are provided as a case study (Figure 5). Following a relatively dry season, the greatest yield response was to the deep application of several different forms of organic amendments, as well as gypsum. In contrast, the surface application of equivalent amendments generally produced smaller benefits, earlier in the growing season.

One notable effect in most trials was the initial yield decrease as a result of deep ripping in the first crop following treatment (regardless of amendments applied) due to reduced crop establishment on these heavy clay soils, but this effect generally disappears in subsequent years. Figure 6: Saturated flow rate of the soils with different amendments in 2018, one-year post-treatment at the Rand site. Source: NSW DPI

The saturated soil hydraulic conductivity, which is a measure of the soil's ability to absorb, transmit and drain water, for the Rand site a year after treatment shows significant improvement, particularly with the combined application of gypsum, field pea straw, and fertilisers (Figure 6).

Figure 7 shows the root growth response to the different amendments at Rand in 2019, three years after initial treatment, with roots clearly proliferating in the slot containing the organic amendments. 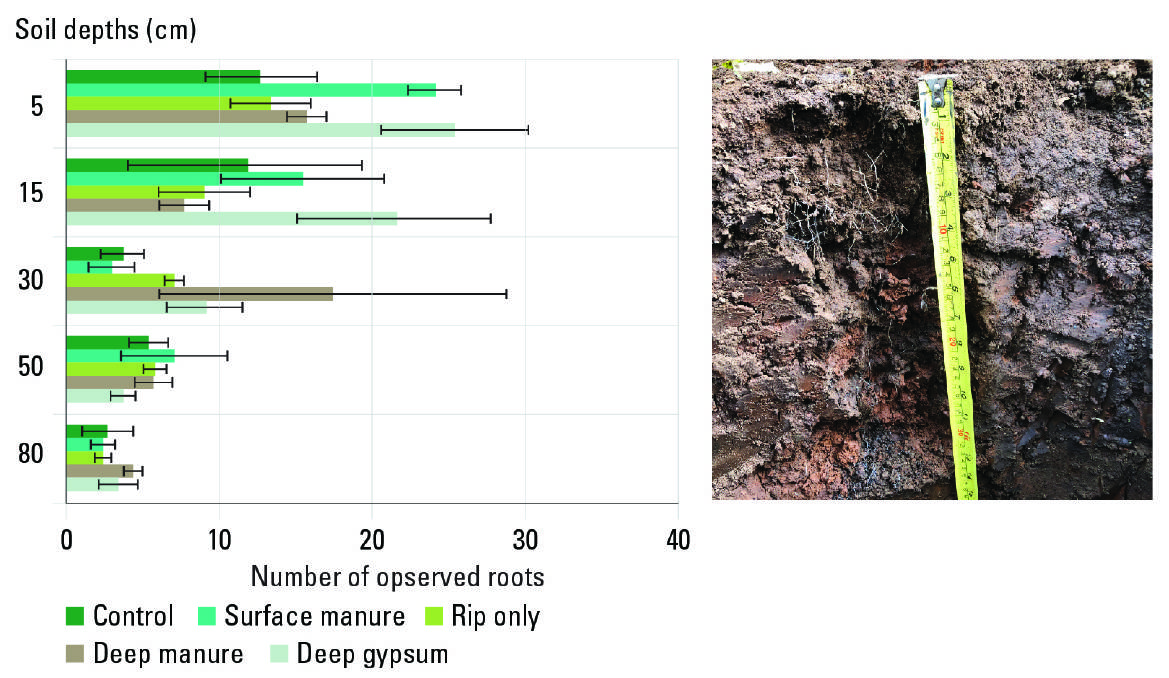 Figure 7: The influence of different soil treatments on root growth at the Rand site in 2019 (third season after treatment implementation). The picture on the right shows the proliferation of roots in the slot containing the amendments. Source: NSW DPI

While the initial crop response appears to be related to the nutrients contained in the organic matter, over time these extra nutrients are depleted by large grain yields, and there is a steady improvement in key physicochemical characteristics in these hostile subsoils.

The exact mechanisms need to be examined further, which is a major goal of the project, but it appears as if the increased root growth in the dispersive sodic subsoil enhances aggregation and structure with long term benefits.

Given multiple subsoil constraints including high pH, sodicity and poor soil structure that exist at this site and across south-east Australia, it indicates amendments with multiple modes of action are required to consistently improve grain yields.

A promising finding from the field trials and controlled environment experiments is that wheat straw mixed with nutrients applied to the subsoil can improve grain yields to nearly the same extent as animal manures in some circumstances. If confirmed, this means that grain growers have a large supply of relatively inexpensive organic ameliorants already available in their paddocks.

Work continues in this project focusing on the longevity of different amelioration processes, as this is the key determinant of the practices' economic viability.