Western Districts grower Lachlan McDougall encourages growers to think outside the box when it comes to invertebrate pest management. Part of his integrated pest management plan is to reduce stubble loads and therefore insect burdens in his paddocks by baling straw.
Photo: McDougall family

People tend to be naturally resistant to change, struggling with the uncertainty that comes with letting go of established routines and ideas. This is why Victorian grower Lachlan McDougall concedes that reducing or eliminating insecticides is a big psychological hurdle .

“Many farmers ask what you’re using for this and that. When I say I haven’t used insecticide for 15 years, they straightaway say ‘Oh, we couldn’t do that!’”

Lachlan understands exactly where they are coming from, but he made the change nonetheless. His father, John, grows milling oats, canola, wheat and lupins, and runs about 1600 Merino breeding ewes at ‘Ballycarrick’, near Tatyoon, in Victoria’s Western District, while Lachlan has a contracting business and produces milling oats, canola and wheat at his Stoneleigh farm ‘Orana’.

A mindset change – radical at the time – saw the McDougalls stop applying broad-spectrum insecticide to the whole farm at ‘Ballycarrick’ in 2006, while Lachlan has not sprayed for pests at ‘Orana’ since he bought the property six years ago.

Their shift from chemicals to integrated pest management (IPM) was prompted by a Southern Farming Systems workshop for growers in the area led by entomologist Dr Paul Horne of IPM Technologies.

The message John took home from the workshop was clear: growers were using a lot of chemicals and wiping out a broad range of beneficial insects for no real reason.

“Effectively, the message Paul was trying to convey was there is no real need to use insecticides and, if you do, you have to be strategic about it, which is the basis of IPM. We’ve probably gone a bit more radical though – from that day we took 99 per cent of the pesticides from the system,” Lachlan says.

The remaining one per cent is slug bait and Fipronil seed dressing to guard against earwigs in canola. “Canola is a bit tricky,” Lachlan says. “At the moment we’re still using Cosmos® in paddocks where we know we’ve got issues with earwigs.”

The McDougalls’ motivation for adopting IPM was not about reducing chemical costs, but a desire to work with the environment rather than against it.

“It wasn’t straightforward,” he says. “We took the plan from having insecticides in the program, whereby we would chuck a bit in every time you run the boom spray out, to taking them out of the system completely. Your beneficial insects, like carabids, hoverfly, parasitic wasps and ladybirds, have to build up over a period of time to compensate for the pests that you’ve got in the system; it wasn’t an overnight thing.”

Having said that, Lachlan says there were fewer failures when he started farming at Stoneleigh because of his experience with John and agronomist Craig Drum, as well as collaboration over several years with entomologist Neil Hives, who helped them adjust crop rotations and align the entomology and agronomy.

The McDougalls started a program of renovating their pasture paddocks in 2009 as livestock markets began to pick up. They are now rotating cropping paddocks into pasture for three years at a time.

Lachlan says sheep fit well into the system for two reasons. They help spread the risk across undulating country that is frost-prone or topographically unsuited to cropping, and graze on a diverse mixture of pasture species that establish quickly – before RLEM eggs hatch in autumn – and are strong enough to tolerate some RLEM activity. 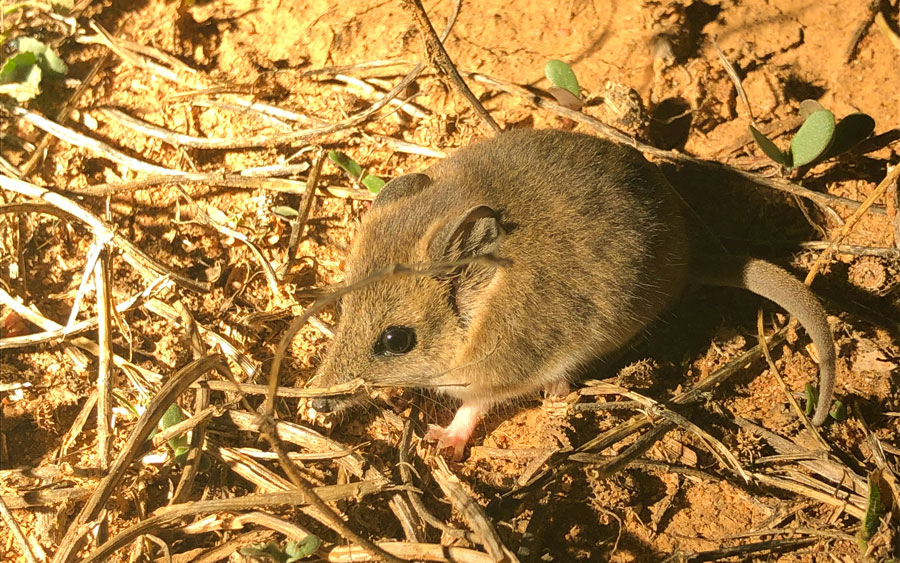 Fat-tailed dunnart, a mouse-like carnivorous marsupial that mostly eats insects, such as beetles and spiders, and is highly sensitive to secondary poisoning from pesticides. Photo: Kelly Angel, BCG

While most growers would manage pests at the end of a pasture phase with a blanket spray and sow the paddock to canola, the McDougalls now opt for oats. That provides a pest and disease break and allows them to eradicate the green bridge before sowing to canola in the following year. By then, the paddock has had an opportunity to rebalance itself with more of the necessary beneficial insects, including predatory mites and native earwigs that dine on RLEM.

Lachlan says they use windrowing to reduce grain loss caused by armyworm in the milling oats. The caterpillars still feed on the last green material on the plant – the petiole at the end of the oat grain – but the grains are held in the straw in the windrow and can be picked up with the header.

The McDougalls have also chosen to grow lupins instead of faba beans, which can only be produced for stock feed because of damage from the occasional borer.

Pastures are established with oats, then oversown  with clover and ryegrass without seed treatment or insecticide application.

“We’ve been able to do that successfully now for about the last three years,” Lachlan says. “Even with the difference in each season. Every year you get told it’s not going to work, but most years it does work. We are not immune to bad seasons. We’ve had some poor establishments, there’s no doubt about that, but we’ve had some exceptional ones too.”

The McDougalls are also doing their best to eliminate stubble burning by baling wheat straw and cutting oats low enough to get the airseeder through, as well as crash-grazing stubbles.

“We get rid of all the residue that way, otherwise I’d have to stick a match in it,” he says. “Not burning is better for the environment and it seems like such a waste if someone else can use the residue. It works well in the system and has allowed us to bring lupins back in on a bigger scale than we used to.”

Lachlan says they knew they were on the right track with IPM when he and Neil were counting slugs under 30-centimetre square tiles along a transect and found a fat-tailed dunnart nesting underneath a tile. The fat-tailed dunnart is a mouse-like carnivorous marsupial that mostly eats insects, such as beetles and spiders, and is highly sensitive to secondary poisoning from pesticides.

Their approach was further confirmed in 2019 when a University of Melbourne researcher monitoring moth flights told Lachlan that IPM was working very well for the farm but “not very well for me”, because there had been no pests to count.

Lachlan is optimistic that IPM adoption will increase as growers and their advisers learn more about management techniques.

“It’s improving now because a lot of the young agronomists are entering the industry with more sustainable mindsets.”