Ensure khapra beetle isn’t on your shopping list this Christmas

Ensure khapra beetle isn’t on your shopping list this Christmas

The khapra beetle is one of the world’s most destructive pests of grain products and seeds. In the larval phase, the beetle is pale and hairy and darkens as it ages. Infested food products can be a health risk. If the beetle established in Australia it could disrupt grain exports, causing huge economic losses.
Photo: James D. Young, © USDA APHIS PPQ, Bugwood.org

People ordering or receiving mail or gifts from overseas, and those few international travellers arriving back in Australia, are warned to guard against introducing the highly invasive khapra beetle (Trogoderma granarium), which poses a significant threat to the grains industry. 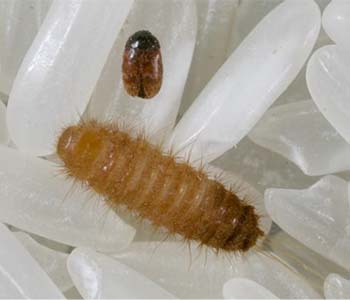 The tiny adult Khapra beetle (top) and juvenile larvae (bottom) pictured on grains of rice. Photo: Department of Agriculture, Water and the Environment.

As the Christmas break approaches and gifts are organised, the advice is to rule out certain plant products to avoid introduction of this beetle - the Australian grain industry’s number one priority exotic plant pest.

Due to its increasing global spread and significance as a pest, the Department of Agriculture, Water and the Environment is implementing a series of urgent actions to address the biosecurity risks of khapra beetle.

In phase 2 of the actions, effective from October 15, 2020, high risk plant products (in various raw and processed forms for any end use) will not be permitted entry from any country into Australia via the international traveller and mail pathways (including items posted using Express Mail Service).

High-risk plant products which will be denied entry* as a result of the changes include:

*Some exclusions apply. You can view the list and exclusions on the Australian Government's Biosecurity Import Conditions (BICON) database.

Khapra beetle is a significant threat to Australian plant industries, including the grain export industry, as it destroys grain quality making it unfit for human or animal consumption.

Stored products can also become contaminated with beetles, cast skins and hairs from larvae, which can be a human health risk.

If khapra beetle establishes in Australia it would have significant economic consequences. An outbreak could cost Australia $15.5 billion over 20 years through revenue losses arising from damaged grain in storage and exports.

Khapra beetle could enter the country via the movement of contaminated goods, including grain, food stuffs, personal effects and machinery. The species has been detected as a hitchhiker on a wide range of cargo (plastic beads, nuts and bolts, timber doors) and as a contaminant in shipping containers.

It has been known to infest more than 100 commodities, including dried plant products such as grains, seeds, beans and nuts. Affected commodities can include wheat, maize, barley, rice, millet, sorghum, pulses, cotton, sunflower, sesame and spice seeds.

A GRDC-led project worth $15 million will boost national capacity for the detection of exotic plant pests such as khapra beetle by building on industry capacity, diagnostic tools and testing biosecurity preparedness.

The Australian Government’s Rural R&D for Profit program funded $4.6m of the project.

The South Australian Department of Primary Industries and Regions' research division, the South Australian Research and Development Institute (SARDI), is one project partner and part of their involvement includes the development and improvement of diagnostic tools for khapra beetle and carrying out targeted blitzes for preparedness and to demonstrate its absence.

“This is a cross-industry Australia-wide project concentrating on high priority exotic pests that threaten production, trade and market access,” he says.

“Early and accurate diagnosis enables a rapid response to threats that can have devastating impacts on production and our access to domestic and international markets,” he says.

“The overarching objective is to create maximum value to plant industries through better partnerships in diagnostic decision-making for biosecurity response efforts,” he says.

“Ultimately it will mean that Australian plant industries are better prepared for an emergency situation. Every day counts when it comes to early and accurate detection to maximise our chances of pest eradication and to minimise business disruption and potential crop and financial losses.”

The project includes research partnerships with agricultural departments from each state and the Northern Territory, along with the CSIRO, cesar, AusVeg Limited, and Plant Health Australia, as well as two New Zealand collaborators - the Bio-Protection Research Centre and the New Zealand Institute for Plant and Food Research Limited.

People are urged to keep an eye on all cargo, containers or parcels arriving through airports, seaports and in international mail. If you see something unusual or unexpected is observed, secure it and report it immediately to the Department of Agriculture, Water and the Environment on 1800 798 636.

For plant biosecurity risks, anything unusual found in a backyard or on a farm can be reported with a simple phone call to the Exotic Plant Pest Hotline: 1800 084 881 (plant pests and diseases, weeds and bees).