Your guide to ag chemical resistance mechanisms in laymans terms

Your guide to ag chemical resistance mechanisms in laymans terms

Surveys of weeds in the Western Riverina have found more than 20 percent of ryegrass is either resistant or developing resistance to glyphosate.
Photo: GRDC

Weeds, insects and fungal pathogens will use every move to survive agricultural chemicals.

Resistance is all about survival. Weeds, insects and fungal pathogens will employ every move in the book to prevent agricultural chemicals from beating them.

Biological cells use enzymes to manufacture essential products, such as proteins, fats, carbohydrates and nucleic acids. Enzymes function using a lock and key mechanism whereby an input substrate key fits into the enzyme lock (as shown in Figure 1A). Agricultural chemicals target these essential enzyme pathways in the cells of organisms by mimicking the substrate key (as shown in Figure 1B). In this way, they block the target binding site and prevent the normal enzyme function that is essential for life.

Manipulating rates is not the solution to managing resistance. Instead, optimise application and rotate chemical Modes of Action (MoA) in combination with non-chemical integrated pest management options.

Chemical resistance can evolve in many different ways whenever a population of organisms is repeatedly exposed to the chemical. The major mechanisms of resistance are: a) target-site resistance; b) target-site over-production; c) metabolic resistance; and d) chemical isolation. Resistance may also result from behavioural responses or physical barriers to prevent a chemical moving into the organism.

The type of resistance and the speed of resistance development will be affected by population size, the method of reproduction, genetics, generation time of the pest and the level of exposure (rate, number of applications and length of residual activity). 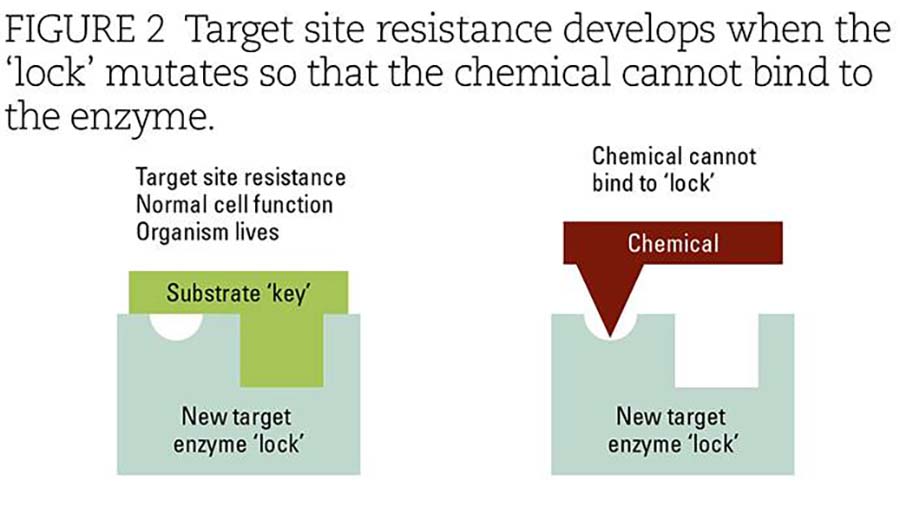 Target-site resistance is when the organism changes the shape of the lock that enables normal cell function so that the organism can continue to grow (as shown in Figure 2). As the lock has changed shape the chemical can no longer bind and hence there is resistance. The level of resistance will depend on how much the lock has changed shape. There may only be partial resistance, particularly in fungal pathogens. If the change in shape negatively impacts the enzymes function, there is a fitness penalty.

The change in shape affects all agricultural chemicals in the mode of action (MOA) group to a greater or lesser extent this is called cross-resistance.

To alter the lock and still produce the essential product is a big change for an organism. It requires a high selection pressure involving repeated exposure to high levels of the chemical. If the lock is changed too much, the substrate (key) will also not fit the lock causing a fitness cost to the organism. 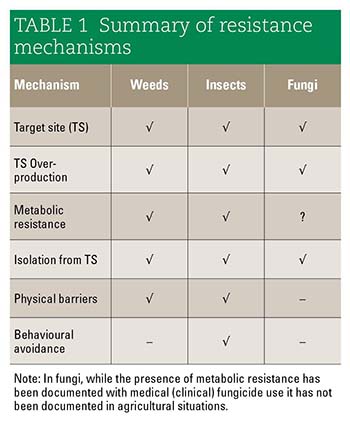 Another common way resistance evolves is when more of the target site enzyme is produced by the cell. This is an inherited change caused by a variation in the control circuit that produces the enzyme.

As there are more locks for the keys to bind to, more chemical is needed to achieve the same level of control. As for target site resistance, all other chemicals in the same MOA group are affected. As over-production is costly to the cell, there is a fitness penalty of some degree.

Here a chemical is recognised as alien and is metabolized (broken down) into nontoxic compounds (as shown in Figure 3). The metabolic enzymes are already present in the target organism. If the agricultural chemical is at a high enough concentration it overpowers these defence mechanisms. At a low concentration, the organisms defence mechanisms are able to metabolise the chemical providing resistance. 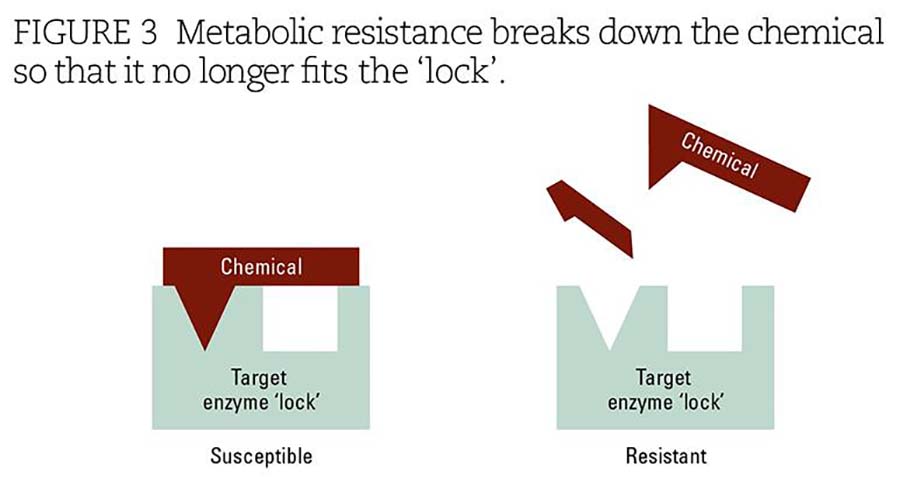 Given repeated exposure, organisms can upregulate (or increase levels above normal amounts) the production of metabolic enzymes to break down alien chemicals. In fungi, while the presence of metabolic resistance has been documented in medical (clinical) fungicide use, it has not been documented in agricultural situations at this stage.

Isolation from the target site 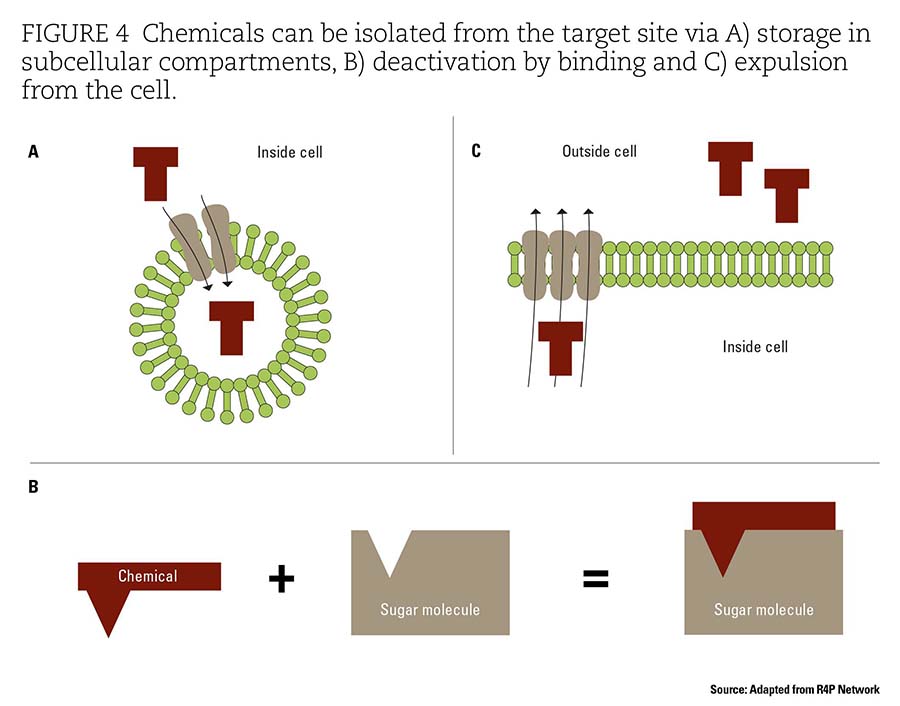 Cells can prevent alien chemicals from reaching the target site by isolation into sub-cellular compartments, such as vacuoles, where they are stored until there are enough metabolic enzymes or they can be excreted from the organism (as shown in Figure 4A).

Cells can deactivate chemicals through binding with sugar molecules, known as sequestration (Figure 4B). Or they can be moved to another location, for instance expelled from the cell or moved to inactive regions such as cell walls (as shown in Figure 4C).

With translocated herbicides, plants may reduce the amount of herbicide that leaves the leaf or root cells (translocation), so less chemical reaches the target site. With continued exposure and sub-lethal exposure to chemicals the target organism can upregulate (increase the frequency of) these mechanisms to cope with an increase in alien compounds. This then leads to an increase in resistance over time.

Other mechanisms that reduce efficacy Organisms can prevent or reduce chemical entry into the cells through a change in the waxy outer structure, a different orientation or chemical make-up (Figure 5). This occurs naturally as a plant grows (for example, older weeds have thicker and tougher leaves) or an insect enters different life stages (for example, a hard exoskeleton).

Insects may use behavioural avoidance of agricultural chemicals. For instance, insects can move to the underside of the leaves to avoid contact with insecticides.