While the disease can often be visually alarming in affected crops, Western Australian Department of Primary Industries and Regional Development (DPIRD) research officer Andrea Hills says growers can overestimate the extent of the problem because the loose smut usually looks worse than it is.

We have had growers estimate levels of 20 per cent loose smut when further assessment has shown it has actually only been around 2 to 2.5 per cent, Ms Hills says.

Nevertheless, she says growers have expressed concerns about the prevalence of the disease, particularly in southern WA. GRDC-invested trials at Gibson, Katanning, Wongan Hills and South Perth, in WA, in 2018 investigated the potential of different management strategies to reduce the expression of loose smut in barley crops.

These were based on the fact that infected plants are already under stress.

Ms Hills says the results clearly demonstrated any barley variety that has Dash or Hindmarsh (PBR) parentage  such as La Trobe (PBR), Spartacus CL (PBR) and Rosalind (PBR)  is more susceptible to loose smut than other varieties.

These varieties had two to three times more infection than other varieties.

Other varieties fell between these two groups."

If loose smut is a problem in your area, the most important management strategy is to seed dress before sowing, Ms Hills says.

Ms Hills says growers could buy in new seed under grower-to-grower trading schemes in an attempt to break the cycle of loose smut.

We encourage growers to dress all seed, every year, because the disease pressure is high given that La Trobe (PBR) and Spartacus CL (PBR) are popular varieties in WA, she says.

Control is critically dependent on good application of the seed dressing  every seed needs to be treated.

There is also evidence that soil moisture conditions at germination play a role in the ability of the germinating seed to take up enough fungicide for effective control.

In six trials in 2018, the impact of loose smut on yield was lower than expected. On average, a crop with a heavy infection, where 5 per cent of plants are smutted, would suffer a yield penalty of 5 per cent. 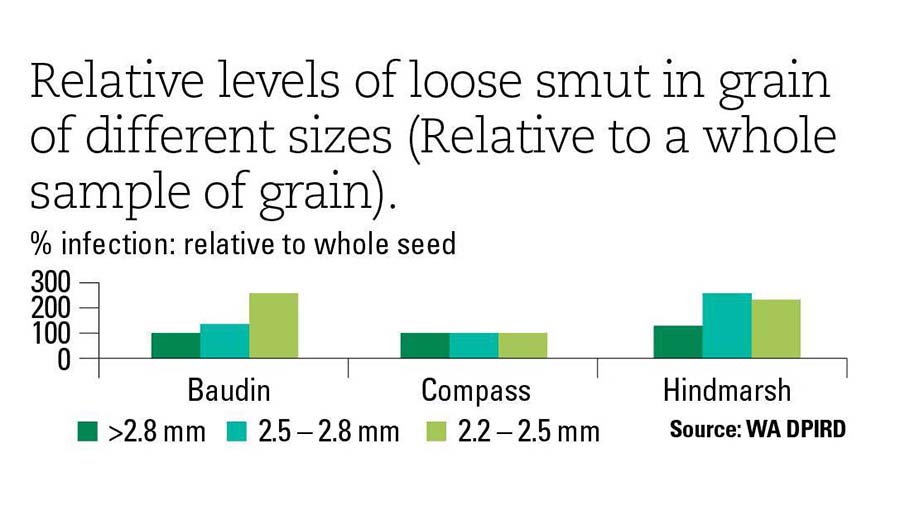 It appears seeding rate may also affect a crops expression of loose smut.

We wanted to investigate whether the management strategy of a higher sowing rate would push these smutted plants too hard for them to survive, allowing the healthy plants to take over.

She says a plot trial demonstrated that higher seeding rates reduced the overall loose smut level in a barley crop.

Although, significant decreases could only be seen with a large increase in seeding rate.

Grower concerns over apparent poor performance of fungicide seed dressings generally, and the awareness that resistance to carboxin fungicide had occurred in Europe and Canada in the 1980s, led to field trials to test whether loose smut samples from different areas of WA reacted differently to carboxin.

This active ingredient is historically one of the more effective seed dressing fungicides for loose smut control.

Small-plot and row trials at Gibson and South Perth investigated the rate sensitivity of seed infected with different loose smut pathotypes to carboxin.

The results showed reduced effectiveness at lower than current label rates in only one infected seed lot.

Ms Hills says this does not mean the use of carboxin-based seed dressings is compromised.

If you use the full registered rate of carboxin seed dressing, we dont believe you will have a problem with control, she says.

Further research is being carried out on the potential of a preventive fungicide spray to break the disease cycle and reduce the infection of plants during flowering in spring.