Advice to monitor cereal crops and grasses this season for fungal disease incidence.

Grain growers in Tasmania and the high-rainfall areas of Western Australia are encouraged to keep an eye out for the disease ramularia leaf spot, which causes yield losses to barley crops.

Ramularia leaf spot, caused by the fungal pathogen Ramularia collo-cygni, was confirmed in Tasmania in 2016.

Nick Poole, managing director of Foundation for Arable Research (FAR) Australia, first discovered ramularia leaf spot in Launceston in 2016. The pathogen reappeared in 2018, just a few paddocks away from the 2016 infection site.

Dr Kith Jayasena, based in the Albany office of the Western Australian Department of Primary Industries and Regional Development (DPIRD), says ramularia leaf spot was confirmed in a commercial barley crop in 2017 at South Stirling in WAs Great Southern region.

He says the pathogen reappeared a year later, when it was confirmed in volunteer barley at South Stirling during December 2018.

The pathogen moves from infected seed into developing plant tissue, he says.

The disease can spread long distances on infected seed stocks and short distances via spores under the right conditions.

Mr Poole says symptoms of the disease - as shown in Figure 1, below - include small brown rectangular lesions with yellow margins within leaf veins. These are visible from both sides of the leaf.

But, typically, the lesions only become obvious on the exposed upper leaves after flowering. In consequence, Mr Poole encourages growers to check their barley, wheat, oats and grasses for these symptoms.

He says ramularia leaf spot symptoms can be easily confused with the disease spot form of net blotch (SNB), which is common on other grasses in Australia.

In areas where ramularia leaf spot has been confirmed, Mr Poole says it is likely the pathogen is present at low levels.

He says in these areas, it may occur sporadically in the future when conditions are favourable, especially in wet and mild climates. 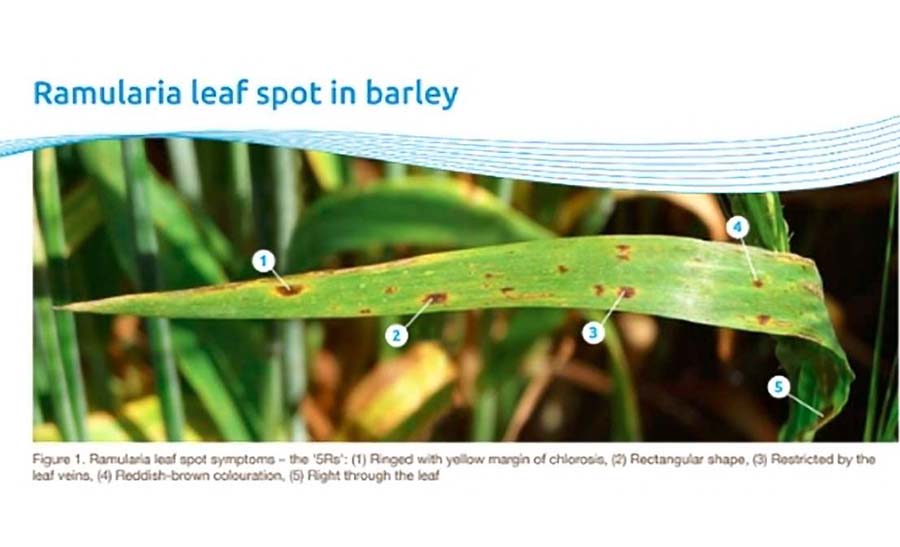 The distinguishing features of ramularia leaf spot, according to a fact sheet called Ramularia leaf spot in barley from the UKs Agriculture and Horticulture Development Board (AHDB), include the following:

Although the disease ramularia leaf spot is principally a scourge of barley, Mr Poole says it can also have secondary hosts.

These include wheat, oats and grass species, including perennial ryegrass.

Some cultivars showed less symptoms than others, but theres nothing at the moment in Australia that has absolute resistance to the disease.

Dr Ken Young, GRDC senior manager biosecurity and regulation, says management of the fungus, at least this season, will need to be through the use of fungicides.

GRDC is working with chemical registrants and industry to put in place a permit for ramularia leaf spot management if required, he says.

"While there is no fungicide registered for ramularia control, the current fungicides used to manage net blotches in barley are likely to be effective on ramularia."

While seed treatments do not control the disease, Mr Poole says some of the newer fungicides applied at the booting stage have proven effective in controlling the symptoms.

Some of the newer fungicide treatments, such as the strobilurins and succinate dehydrogenase inhibitors (SDHIs), have given exceptional control of ramularia leaf spot symptoms," Mr Poole says.

Preliminary data from very high-yielding Tasmanian trials would indicate we can obtain up to a two tonne per hectare response from controlling the disease in 10t/ha barley crops.

However, in Europe and New Zealand, Mr Poole says ramularia leaf spot has quickly developed resistance to the strobilurins and SDHIs and that is a concern.

Mr Poole says other actives, particularly multi-site fungicides (those with activity against many fungal pathogens), are allowing ramularia leaf spot to be managed in New Zealand and Europe where fungicide resistance to the strobilurins and SDHIs have occurred.

If a crop has been confirmed to be infected with ramularia leaf spot, you shouldnt use seed from that crop for sowing, he says.

A spokesperson from the Australian Department of Agriculture and Water Resources says there are no expected impacts to barley exports and currently no country requires freedom from ramularia leaf spot in barley.