Use of fungicides in Australia puts selection pressure on fungal pathogens

Use of fungicides in Australia puts selection pressure on fungal pathogens

Mutation enables the fungi that cause cereal diseases to generate genetic variation.

Like all microbes, the fungi that cause cereal diseases have an amazing propensity to generate genetic variation.

One of the most important mechanisms generating this variation is mutation - a random process that has been estimated to occur in rust fungi at a rate of about 1.6 per 100,000 to 200,000 spores.

It sounds pretty unlikely, but microbes such as the rusts generate huge numbers of spores, even at relatively low levels of disease.

In the wheat leaf rust pathogen Puccinia triticina, for example, a single pustule can produce some 2000 urediniospores per day for two weeks or more.

In the fungi that infect cereal crops, genetic variation is often manifested by the appearance of a new pathotype (strains, races etc).

Being able to infect a previously resistant cultivar confers a strong selective advantage, leading to a new pathotype being selected for and its frequency increasing within the overall pathogen population. 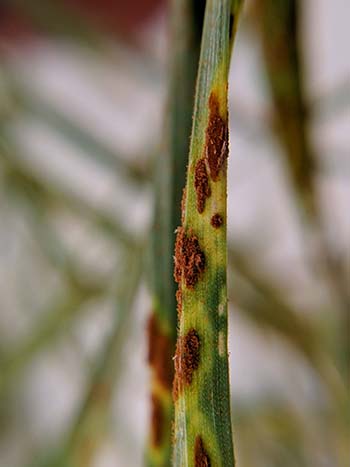 A single rust pustule can produce about 2000 urediniospores per day.
Photo: Michelle Demers, University of Sydney

The use of fungicides in Australian broadacre farming since the early 1980s has provided another selection pressure on fungal pathogens.

Insensitivity to DMI fungicides has been recorded in a number of pathogens, including Septoria tritici blotch, wheat powdery mildew, barley powdery mildew and net form of net blotch and blackleg in canola. So what about fungicide insensitivity in the rust fungi?

We have screened rust isolates collected for pathotype analysis in the 2017 and 2018 seasons in greenhouse assays for sensitivity to the DMI fungicide tebuconazole. These tests failed to find any evidence of fungicide insensitivity in the wheat stem rust pathogen (Puccinia graminis f. sp. tritici).

It is important to stress that only slight shifts in insensitivity with no apparent field significance have been detected in our work on cereal rust pathogens to date.

Further screening will be crucial if monitoring cereal rusts for insensitivity is seen as being important by the industry.

Growers and other stakeholders are encouraged to monitor crops closely for rust in the coming season, and to forward freshly collected samples in paper only to the Australian Cereal Rust Survey, University of Sydney, Australian Rust Survey, Reply Paid 88076, Narellan, NSW, 2567.