How to minimise wind erosion after soil amelioration

How to minimise wind erosion after soil amelioration

Big wind events in 2020 across the Western Australian grainbelt, especially in May, clearly demonstrated that wind erosion after summer/autumn soil amelioration is a serious problem. Both ameliorated and non-ameliorated paddocks blew, but community attention focused on recently ameliorated and exposed soil.

While many growers believe the long-term gains from amelioration can outweigh the short-term pain from wind erosion, it is still worth considering ways to reduce erosion risk and negative publicity for cropping. Strategies to minimise wind erosion aim to:

One approach is to ameliorate a small area of the farm each year. This makes it easier to ameliorate at the opportune time and limits wind erosion risk, but means lost production and opportunity costs on areas that are not ameliorated.

If there is a fallow in the rotation, ameliorating at a different time during the season can significantly reduce wind erosion. For example, this could mean mixing soil in autumn when it is wet, seeding immediately with a cover crop, then ripping and rolling in spring before or after knocking down the cover crop. This has the added benefit of allowing the soil to settle over the summer to reduce plant establishment issues in soft soil.

In higher-rainfall areas, ameliorating in late winter/early spring and sowing a cover or summer crop immediately afterwards can both stabilise the soil and make better use of the recently ameliorated soil.

For all soil amelioration, work to the conditions, not the calendar. Working too dry increases the erosion risk of most machinery operations and often means a suboptimal result.

Ripping is best done when there is enough moisture to rip to the required depth, but not so much that the soil just smears. Ripping when it is too dry leads to inefficiencies such as more fuel use or breaking points, as well as increased wind erosion risk. The trade-off might be ripping fewer hectares than desired.

Rip when there is maximum stubble cover. This is easier said than done because productivity and stubble residue is generally lower where there is compaction. Retain as much standing stubble as possible. Thin, straight ripping shanks damage stubble less than inclusion plates or delving tynes.

It is also important to consider rotations. Ripping after a cereal and before sowing another cereal maximises ground cover and lowers wind erosion risk, because cereals:

One downside of ripping between cereal crops is weed control, because ripping often stimulates grass weeds.

Ripping after a cereal and before canola/lupins can be more profitable and better for weed control, but is risky because:

Other options to manage wind erosion include rolling in a separate operation closer to seeding (see section on rolling) and sowing immediately after a late rip. Balancing machinery needs and logistics close to seeding can be tricky and limit the areas treated.

Ripping post-seeding has variable results. For cereals, the WA Department of Primary Industries and Regional Development recommends ripping within about three days of seeding to avoid disturbing establishing plants. Grower experience is that ripping three to four days after seeding can result in patchy germination, but the crop recovers. Some growers have found ripping up to 10 days after seeding has had minimal impact on plant numbers. This timing can also mean a better ripping job because the soil is not too dry. Even later ripping (Z32 and later) tends to damage more plants, but some growers have achieved positive results, especially where ripping has been followed by rain.

For canola, poor plant establishment after ripping has prompted growers to try ripping post-seeding and early post-emergence (EPE). The attraction is canola can be more responsive to ripping than cereals; a larger yield uplift of a higher-priced seed means more profitable ripping. One trial currently underway in Latham compared unripped, summer-ripped and EPE-ripped paddocks. While ripping EPE damaged the plants, they recovered during the season, and had better establishment (5.2 plants per square metre compared to 1.8 plants/m2 on the summer-ripped paddocks).

Aggressive soil disturbance leaves a bare, highly vulnerable soil surface. Spaded and ploughed sandy soils have the highest wind erosion risk. However, the risk is somewhat mitigated by what is brought to the surface during amelioration. Bringing up clay with increased water-holding capacity lowers erosion risk because the surface soil takes longer to dry out. However, if the wind is too fast for too long, eventually these small clay and moisture benefits run out.

Clods greater than two centimetres in diameter can lower erosion risk by providing physical cover and slowing surface wind speed, especially when clods are moist. Theoretically, more clods provide better protection and stable/hard clods are more effective than weak, sandy clods. Rolling as late as possible before seeding keeps the clods acting as ground cover. Try to wait until it rains to break up the clods, then seed. Rolling when the clods are too dry can just push the clods back into the soil, to get dragged back up again during seeding and make seeding depth difficult. Seeding soon after rolling is important for clayey clods; if they are crumbled too early and dry out they can cause surface crusting.

For spading, delving or ploughing:

When clay spreading and incorporating to deal with water repellence, one option is to leave the clay on the surface over the summer when the wind erosion risk is at its highest, and smudge and incorporate the clay into the top five to 10cm before seeding. 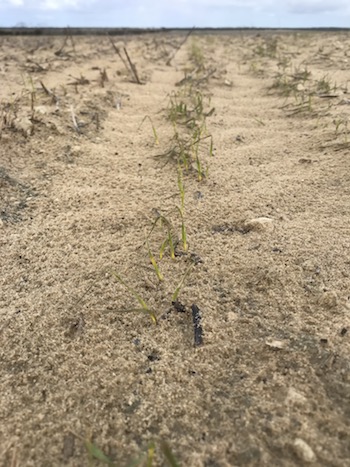 Rolling as late as possible before seeding leaves stubble standing for longer, reducing the time the soil is exposed. Note that this does not completely remove erosion risk. Some growers in 2020 rolled lupin stubble and seeded about one week before the big winds in May. The flattened stubble caught the eroded soil and buried the crop.

Rollers that leave ridges in the soil (for example, Cambridge roller and ring rollers) reduce erosion risk. Research in New Zealand found that ridges that were 50 to 100mm high and at right angles to the wind were the ‘sweet spot’ for erosion tolerance, with erosion increasing again if ridges were greater than 100mm high.

Coil packers might seem like a good compromise; they are light, leaving more stubble intact while also creating a ridged herringbone pattern in the soil. Coil packers are good if you only need a light pack but are not much use after ripping more than 300mm deep, or in damp conditions. If it is not making a good seedbed, you may as well not roll at all. Smooth rollers like drum rollers leave the surface flat and more prone to erosion, particularly where stubble cover levels are low.

Where there is low stubble cover, heavier and more ridged rollers will do more damage to the standing stubble. Because stubble is more effective at reducing wind erosion than soil ridges, consider a lighter/smoother roller, as long as you are still firming the seedbed.

High stubble cover is more forgiving of heavier/ridged rollers. Rollers are likely to flatten the stubble but leave some anchored in the soil.

Some growers might consider not rolling at all. This is only really an option if:

High-traffic areas such as headlands and tramlines are prone to wind erosion because they have less standing stubble. Where possible, reduce the amount of traffic in these areas. For example, run chaser bins on designated lines on headlands, on gravel access tracks, and rotate tramlines used for spraying. Renovate wheel tracks if they become deep or rutted.

Watch the video ‘after the wind’ for research, grower and consultant perspectives on dealing with wind erosion.

*This article was produced as part of the GRDC ‘Maintain the longevity of soils constraints investments and increase grower adoption through extension – western region’ investment (PLT1909-001SAX). This project is extending practical findings to grain growers from the five-year Soil Constraints – West suite of projects, conducted by the WA Department of Primary Industries and Regional Development with GRDC investment.