A three-year research project has been exploring the potential benefits of using precision planters in winter cropping programs.

Precision planters are seeders designed to isolate individual seeds and place them at a precise spacing and depth within the seed row. The technology was first developed for seeding summer crops such as maize.

Dr McDonald says precision planting was shown to improve the uniformity of crop stands, offered some improvement in crop establishment rates and often allowed reductions in plant density without any loss of yield.

“This means there is potential for growers to reduce their seed costs per hectare, especially in crops with high seed input costs such as canola,” he says.

Small plot trials with a variety of crops were conducted at sites across the southern region during 2018, 2019 and 2020 and at Merredin in Western Australia during 2019. These compared a conventional cone seeder with a small plot precision planter and revealed a consistent improvement in the uniformity of interplant spacing when using the precision planter.

“Despite variable results with establishment, precision planting resulted in yields equivalent to or higher than those achieved with conventional sowing at the same plant density,” Dr McDonald says.

“While yields were generally equivalent between the two seeding technologies, in one set of trials precision planting improved faba bean yields by 18 per cent, lentil yields by 14 per cent and lupin yields by 10 per cent.

“This highlights the potential of precision planting technology, but more work is needed to produce reliable, repeatable yield improvements.”

The project also included a qualitative survey of growers using precision seeders in the southern and western growing regions. This followed paddock surveys of crop establishment in 2018 and 2019 to assess variations in seeding depth and seedling emergence, and the factors contributing to those variations.

Many of the growers reported reduced seed costs per hectare, especially with hybrid canola, as well as more uniform crop emergence and vigour and improvements in accuracy of seed placement.

However, it was clear that precision planting technology cannot deliver improved results by itself. Optimal seeding depth, good weed and residue management, high-quality seed and even reducing paddock roughness all contributed to seeding outcomes.

One problem that became apparent to the research team was precision seeding technology had not been developed for winter cropping systems and growers needed to adjust the settings to suit growing conditions in the southern region.

“Several growers we surveyed had adapted summer cropping equipment for their winter cropping program but were unable to obtain technical support when making the necessary adjustments,” Dr McDonald says. 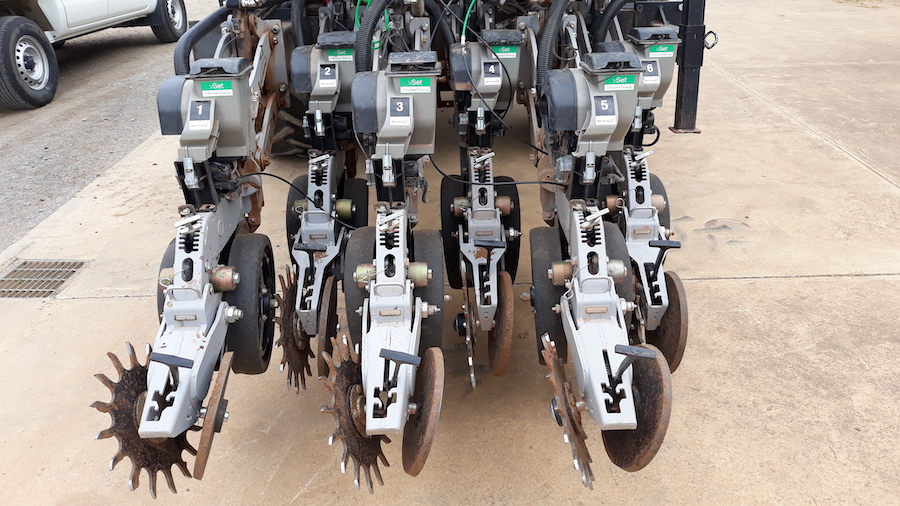 The small-plot precision seeder used in the trials in South Australia and Victoria. Photo: Glenn McDonald

Like all seeders, the set-up of a precision seeder is crucial for obtaining optimum performance. A dedicated calibration evaluation conducted during the study, using field peas, demonstrated how easily planter performance was affected by settings and operation.

He adds that smart technologies are being incorporated into precision seeders suited to winter crops, with sensors that can provide real-time monitoring of in-furrow conditions such as soil organic matter, moisture content and temperature, then make on-the-go adjustments to seed placement.

“Currently, precision planters are an expensive and high-technology approach to improving crop uniformity that will not suit all growers, but intermediate and transitional technologies that are coming onto the market may provide a lower-cost solution.

While cost savings, improved profitability and smart technologies all have a central role in advancing farming, precision planters will need to be cost-effective, versatile and robust enough to fit into the current farming systems of the southern region before they are ready for widespread adoption.

“Because grain yield responses have been variable in our precision planting trials, the technology may not yet be worth investing in for yield response alone,” Dr McDonald says.

“As the technology is tailored to southern cropping systems, the combined benefits will be worth continued consideration.”