Reduced lodging risks in high-yielding wheats on the horizon

Reduced lodging risks in high-yielding wheats on the horizon

Genetics that reduce wheat’s propensity to lodge under northern growing conditions, while maintaining high yield, have been identified in a recently completed GRDC project led by Dr Fernanda Dreccer at CSIRO Agriculture and Food.

The genetics modify characteristics associated with the width of a plant’s root plate, which is the rigid sub-superficial part of the root system that anchors a plant.

“Our trials found that when the root plate’s width reaches 5.5 centimetres, lodging becomes minimal even under highly productive and irrigated conditions that tend to promote lodging in high-yielding lines,” Dr Dreccer says.

The new genetics have been crossed into three Australian cultivars that were selected by the Australian Plant Breeding Reference Committee: Suntop, EGA Gregory and LRPB Spitfire.

The resulting wheat populations underwent field trials that allowed breeders to assess the new germplasm and select lines to include in their commercial breeding programs.

This important breakthrough is unique among global efforts to reduce yield losses through lodging. The project made important progress in large part through the development of specialised field methods that could reliably induce lodging during field trials and to high-end expertise in screening and scoring (or ‘phenotyping’) plant traits that influence lodging propensity.

Key to the project’s success was the ability to meticulously cut through the sheer number of plant characteristics that can influence lodging and the relationships these have with environmental and soil conditions.

That meant devising field trial protocols that ensured any genetic tendency towards lodging would be expressed by the wheat lines under investigation.

For Dr Dreccer’s multi-environment trials, that meant deliberately including high rates of nitrogen fertiliser applications (350 to 400 kilograms) and tactical irrigation. A genetically diverse, high-yielding wheat panel could then be typed for their propensity to lodge with greater accuracy. This work revealed a complex picture, with upwards of 20 plant traits found to affect lodging, including:

The resulting accuracy allowed the CSIRO team to identify root plate width as the trait that is especially important under northern paddock conditions.

“In the northern region, wheat crops are often growing in soils with high clay content,” Dr Dreccer says. “It doesn’t take a lot of rainfall or irrigation to make the soils unstable. That’s when anchorage becomes an issue for the plant and creates great vulnerability in terms of the crop falling over.”

The importance of rigid root anchorage was further validated using advanced statistical modelling that contrasted impacts possible for all 20 of the lodging-related traits.

“The impact from the root trait is so great that it takes a combination of several of the other potential anti-lodging traits – such as plant height and stem morphology – to have the same level of protection as that achieved by just increasing the width of the root plate,” Dr Dreccer says.

The gain in root plate width was made using high-yielding germplasm sourced from around the world, including lines obtained from breeding companies. Other sources included the International Maize and Wheat Improvement Center, with lines contributed by Professor Richard Trethowan at the University of Sydney and the International Center for Agricultural Research in the Dry Areas.

The material was screened at multiple trial sites located between the Liverpool Plains and Central Queensland.

The best-performing material was crossed into three northern wheat varieties, with the population derived from the cross with EGA Gregory also used to genetically map lodging propensity in the form of quantitative trait loci (QTL). A total of 14 QTL were identified that associate with lodging (but not with height or flowering). 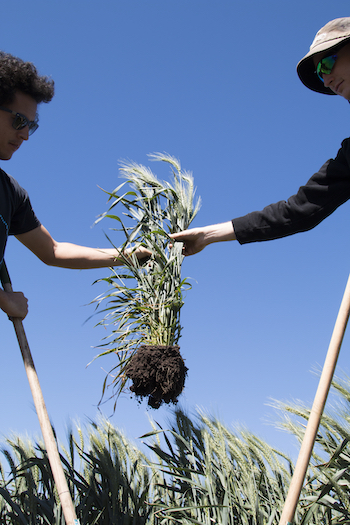 At the completion of the project, germplasm and DNA markers were made available to breeders to select for these QTLs. Mindful that the QTLs vary in the strength of their effect, Dr Dreccer suggests combining a small number of the stronger QTLs as they alone are known to greatly diminish the incidence of lodging.

“Despite lodging being such a complex trait, it was satisfying to see that genetic gain was possible in high-yielding backgrounds,” Dr Dreccer says.

“Uptake of germplasm and DNA markers by breeders will hopefully see the trait make its way into commercial cultivars in the near future.”

Adoption of the lodging resistance genetics has an additional benefit: breeders are now able to keep raising yield potential without running the risk of making crop losses from lodging worse.

Dr Dreccer also stresses that advances made in the GRDC project were the result of a concerted team effort. Within CSIRO, that included Tony Condon, Lynne McIntyre, Mary Anne Awasi, Greg Rebetzke and many more. Bethany Macdonald, Gabriela Borgognone and Valeria Paccapelo from the north node of Statistics for the Australian Grains Industry provided high-end expertise in biometrics. Kerrie Forrest from Agriculture Victoria was also involved with QTL discovery efforts.