Genetics that confer greater heat tolerance to wheat germplasm have been identified. The researchers have also developed DNA markers to help transfer these genetics into commercial breeding lines.

The gain has been achieved through a series of GRDC investments. Now the same research team is undertaking a deeper probe of the biological responses to heat, generating data needed to apply the powerful and predictive ‘genomic selection’ breeding technology to the heat tolerance challenge.

A diverse collection of wheat cultivars, landraces and wild relatives was previously screened to source diversity in the response to heat stress (project US00057). Screening ended in 2016 and relied on extensive field testing. Results were further validated in controlled-environment studies.

The new genetic variability for heat tolerance was then analysed and exploited in a subsequent project, with the emphasis on heat tolerance in pre-breeding lines while concurrently developing selection tools and criteria for wheat breeders (project US00081).

The project leader for the overall initiative is Professor Richard Trethowan of the Plant Breeding Institute at the University of Sydney. 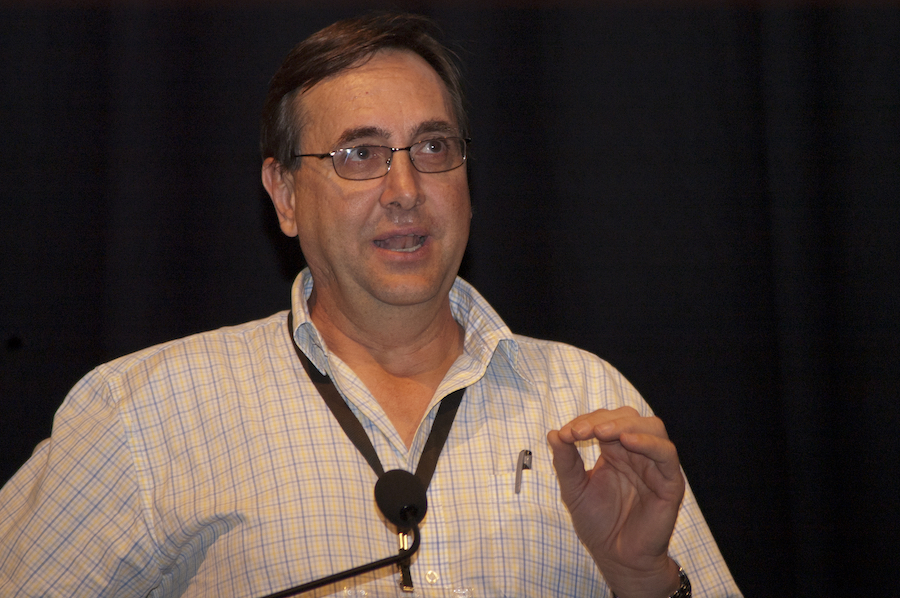 Richard Trethowan from the University of Sydney. Photo: Gio Braidotti

Professor Trethowan says the latest efforts, in collaboration with Dr Hans Daetwyler at Agriculture Victoria, were designed to avoid the pitfalls associated with past efforts to work with the heat tolerance trait. The new approach uses techniques that can handle the complexity of the gene-by-environment interactions that occur in the paddock.

“We now have a technique, called genomic selection, that allows us to work with, not against, the rich interplay of genes and environmental conditions that ultimately determines yield variability when heat stress becomes a factor,” Professor Trethowan says.

He describes genomic selection as a breeding technique that uses genetic variation across the entire wheat genome, environmental information and powerful computers to predict performance under a barrage of different growing conditions.

This strategy results in algorithms that predict the optimum combination of many gene variants that are needed to rapidly make genetic gain. This technique has proven exceptionally powerful in designing breeding programs that have made rapid genetic gain possible for other complex traits, such as drought tolerance in maize.

Professor Trethowan explains that phenotypic data is essential to move forward as it powers up the use of genomic selection technology while simultaneously improving understanding of the biological mechanisms that provide heat tolerance in screened germplasm. “While the effects of high temperature on yield and grain quality are well-known, the biological mechanisms that allow plants to react to heat differently are not,” Professor Trethowan says. “A major stumbling block to the genetic improvement of all complex traits is accurate phenotyping. In fact, the lack of broadscale and relevant phenotyping strategies have historically limited genetic progress.”

GRDC has also invested in a complementary project (US00080) that will take the heat-tolerant germplasm and generate novel data related to the biological, physiological and metabolic measures that best account for variation in wheat heat tolerance levels. One aspect of this work is understanding how heat tolerant genotypes generate, use and transport nutrients in high temperatures.

The push to generate a new generation of heat-tolerance phenotyping data is being undertaken as a multi-institute collaboration. Professor Ruan says that when it comes to yield resilience under heat stress, the focus falls on the plant’s ability to continue to make and allocate nutrients – sucrose and amino acids – to fill grain. That means the problem is viewed as an equation between a source (photosynthesis) and various sink processes that use nutrients (including respiration and grain filling). Interlinking them is the plant’s vascular system that underlies the partitioning of nutrients.

“It’s an equation that can be balanced differently by wheat given different growing conditions and genetics,” Professor Ruan says.

“The plant needs to maintain photosynthesis, but we can’t focus on it exclusively without running the risk of ending up with more biomass in stems or roots, but no grain yield advantage. That’s why we also take into account nutrient partitioning and nutrient uptake by flowers or young grains under heat stress.”

The specialist skills of the collaborating researchers are partitioned along the same line, with the ANU focused on photosynthesis and respiration and the University of Newcastle on partitioning nutrient to, and uptake by, developing grains. Combined, it enables the team to target the biology that allows wheat to sustain grain production under heat duress and reduce screenings.

Besides the computing power and big data capability of genomic selection technology, there are other ways the team is introducing advanced technology to make a step change in heat tolerance.

Hyperspectral cameras can be linked to machine learning to derive signatures from light readings that serve as markers for important biological, physiological or metabolic differences in heat tolerance. As a result of this technological capability, the researchers are increasingly talking about ‘pheno markers’, which work similarly to DNA markers in that they aid in selecting the most promising lines during breeding. Brad Posch examining elite wheat lines for heat tolerance in one of the re-fitted shipping containers invested in by GRDC. Photo: Onoriode Coast

Dr Coast says this kind of technology is being used at ANU to investigate both photosynthesis and respiration, during the day and night, including the use of robotics to further boost high-throughput capabilities so that it can be used to screen numerous wheat lines.

Generating the phenotyping data has entailed field trials of germplasm that varies in its heat tolerance, using three sowing times to create a range of exposure to end-of-season heat. This was followed up with controlled-environment studies that allow for finer manipulation of growing temperatures that provides a higher-resolution picture of the heat-tolerance mechanism.

Mr Posch says this fine-tuning has included use of another new technology: the $1 million growth capsule, the product of another GRDC investment. This is a shipping container re-fitted to operate as a growth chamber whose climate is under computer control. That means the growing conditions at, for example, the Narrabri, NSW field trials can be mimicked, as well as scenarios that match future climates, including warmer night temperatures.

Ultimately, machine learning will allow a mashup of the genetic and phenotypic analyses, resulting in the ability to assign breeding values that reflect heat tolerance levels. The most valuable genetics can then be selected using DNA markers, with pheno markers available to validate the breeding in the paddock.

“We know there is variation in wheat’s ability to continue to make nutrients under heat stress and partition them into grain,” Professor Trethowan says.

“But we also know there are a lot of biological pathways involved. The use of machine learning combined with the new phenotyping data means that we can, for the first time, get a handle on all the pieces of the jigsaw puzzle needed to develop wheat cultivars that maintain yield in a warmer climate.”