Researchers report important progress in developing a new tool to realise the next generation of wheat yield gains.

The tool takes the form of an index that rates wheat's energy use efficiency (EUE). It can be used to exploit genetic diversity in a wheat plant's ability to use energy from photosynthesis to optimise yield.

The breakthrough is being finalised by a global network of laboratories headed-up by Professor Barry Pogson at the Australian National University (ANU).

A tool like the EUE index is important to the success of the US$100 million International Wheat Yield Partnership (IWYP) that is targeting photosynthesis related traits.

It averts a scenario where IWYP succeeds in improving photosynthesis rates yet fails to lift yields because the energy is not 'shunted' into extra grain production. To get to this breakthrough stage, the EUE scientists - supported by GRDC investments - had to tap some of the world's most advanced technologies.

Patterns and correlations in the resulting 'big data' were then scrutinised with the power of machine learning to generate algorithms that can detect and rate EUE traits.

The new understanding is also being used to better simulate photosynthesis in one of the world's top crop growth computer models (APSIM), a cornerstone of advanced new breeding technologies.

"The classical thinking about improving wheat yield rests on equations around light capture by photosynthesis and the harvest index, but we argued those equations were not taking into account how the plant used the energy," Professor Pogson says.

"When we mapped energy use in fine detail, we detected a lot of waste, but also genetic variation that makes some plants more efficient."

"It's that diversity that we want to exploit to raise yields."

The new energy use efficiency (EUE) index exploits genetic diversity in wheat by detecting lines that use energy from photosynthesis most effectively in terms of optimising yield. - Australian National University Professor Barry Pogson A new view of wheat has emerged as a result of mapping the energy fluxes that occur in the plant day-to-day and through development.

Profiled by the researchers was germplasm of significance to the Australian grains industry, alongside internationally important breeding material - including the promising 'high biomass population' developed at the International Maize and Wheat Crop Improvement Centre (CIMMYT) in Mexico.

Measurements were made during six field trials in Mexico and Australia, in addition to two trials in potted plants at the Adelaide Plant Accelerator (Australian Plant Phenomics Facility), mainly for the purpose of identifying genetic associations.

Critically, inefficiencies in energy use were detected, including observations of plants 'stressing out' in a manner familiar to any human who has wasted energy fretting about things they can't control.

While this may seem a novelty science finding, it actually has important yield implications.

"What's surprised me is how much of a plant's energy goes into stress and defence," Professor Pogson says.

"About 85 per cent of the energy the plant captures by photosynthesis goes into living, but this includes stressing about stuff the plant can't solve or doing things extremely inefficiently."

One example includes fighting to get the last of the nitrogen from the soil, but at an energy cost to the plant that isn't worth the effort. Genetic diversity in energy use efficiency has been detected in a wheat. Photo: Lannon Harley, ANU

To convert these findings into an EUE index, however, entailed scrutinising the huge dataset for patterns and correlations, such as between levels of respiration and biomass.

To run the analysis free of bias, the team opted to use machine learning (ML), with several methods (including Random Forests and Partial Least Squares) brought to bear on the problem by ANU's Dr Andrew Bowerman.

"When it came to understanding the data, we wanted to avoid detecting patterns based on preconceived ideas - we wanted to let the data speak for itself," Dr Bowerman says.

"ML allows us to go down as many roads as possible, scrutinising all the data in many ways for possible relationships and patterns."

The EUE index is a result of that process of detecting correlations between genotypes, phenotypes, metabolism, physiology, biomass and yield. Captured by it are complex relationships that can now be used to differentiate EUE within populations.

"I think machine learning has changed the -omics technologies for the better in terms of applying information," Professor Pogson says.

"Before, -omics technology was giving us this unfocused big data and we could only look for rudimentary patterns or simple correlations.

"But the real power of Big Data is being able to link different datasets and find patterns you couldn't find by eye. That's what I think is the game changer from the last five years." 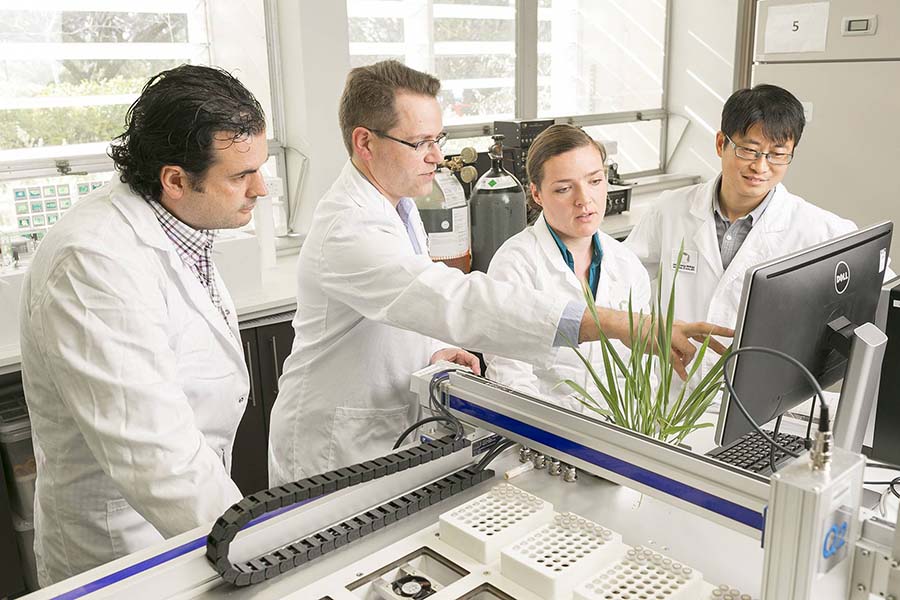 Several important breeding applications are under development as a result of this project.

One important area for development work involves the notion of 'phenomarkers'. These are analogous to a DNA marker in their ability to efficiently select for a desirable trait.

But instead of being based in older DNA technology, 'phenomarkers' draw on much newer hyperspectral (light) technology that can be deployed in the paddock.

The hyperspectral measurements are taken by shining light onto a leaf and recording the reflected spectra across a range of wavelengths (from ultraviolet through to visible and infrared).

This data is analysed by AI to detect signatures that can be correlated to important traits related to energy use and yield.

"What we are detecting with a 'hyperspec' signature are complex biological states backed by an AI that amounts to an EUE index," Professor Pogson says.

The aim now is to further validate the EUE index to create a breeding tool rigorous enough to lift yields by optimising the way energy is captured, used and partitioned by the plant. This process will weed out the stress-prone germplasm and the procrastinators in favour of more efficient users of energy.

An EUE index would also allow existing cultivars to be rated to get a grip on how well energy use has already been indirectly optimised by breeders over the years and how much more gain is possible.

Another important series of applications derive from updating breeders' yield equation to include the energy index and, therefore, adding-in the ability to account for the way energy is used by plants.

Currently, yield is equated to light reception multiplied by radiation-use-efficiency and by harvest index (the ratio of dry matter at maturity to grain yield).

As such, it fails to capture where all the energy captured as sunlight, has gone; be it to daily respiration, stress or defence.

"I think the energy index is adding a critical new term to the equation that predicts yield and yield components," Professor Pogson says.

"By getting that equation updated, I think we will have a whole new set of traits for breeders and researchers to go after to get higher yielding crops."

Finally, there are options to potentially upgrade crop growth computer models, such as APSIM, which is currently used to make important yield gain in maize and sorghum when coupled with genomic prediction technology.

For example, APSIM currently has a fixed value for respiration and doesn't account for variation during growth and over time. An accurate number for respiration has become achievable as the first in a series of EUE related refinements. These will have benefits for wheat breeding more generally.

As Professor Pogson says: "With regards to the observed biodiversity in respiration, for example, I think we will be able to understand and use it. I don't think we are at that point yet. But I absolutely believe yield gains are going to be possible by optimising the energy index."

Partners are key to success

Included are teams with expertise ranging from crop physiology and biochemistry to genetics and machine learning.

NOTE: This work was undertaken within the IWYP umbrella and funded through GRDC investment.

It should be noted that the '-omics' technologies allow for fast, automated mass screening of plant attributes at the molecular level. Below is an explanation of some of these tools being used by Australian breeders.

Genomics: interrogates the organism's complete set of DNA, including all of its genes. Mass screening at this level anchors the analysis of biodiversity. It also creates genomic maps that help identify the genetic basis of important plant traits.

Transcriptomics: interrogates all the molecules that are formed when genes are expressed inside cells. These molecules are called messenger RNA (mRNA). Since all cells in a plant contain the same genomic DNA, it is actually the differences in gene expression that permit cells to specialise and perform different functions. Analysis at this level identified which genes are important in the expression of important traits or in response to environmental conditions, such as drought.

Proteomics: interrogates the entire complement of proteins that are produced using mRNA. Put simply, proteins are the next functional level up from genes and account for all biological activity, from fertilisation to grain filling. This is where biodiversity is expressed in terms of different biological activity.

Metabolomics: interrogates the entire complement of metabolites produced as a result of the plant's physiological activity, such as photosynthesis and respiration. Mass screening of metabolites provides a window into the plant's energy system and how it uses that energy during development and in response to growing conditions.

Phenomics: interrogatesthe plant at the level of observable traits, such as plant height, and flowering time. With thousands of biodiverse plants needed to identify valuable traits, phenomics creates the means to quickly mass screen populations for valuable traits. This is the all-important first step towards identifying a basis for differences in organisms' ability to survive and thrive in different environments.