New South Wales growers have had their first look at a new Hyper Yielding Crops research site where a range of tactics are being explored to lift wheat yields to eight tonnes per hectare and canola yields to 5t/ha.

The southern NSW research site at Wallendbeen is one of the first Hyper Yielding Crops trial sites on mainland Australia, following a five-year trial in Tasmania. The GRDC research investment is led by FAR Australia in collaboration with Brill Ag and CSIRO. 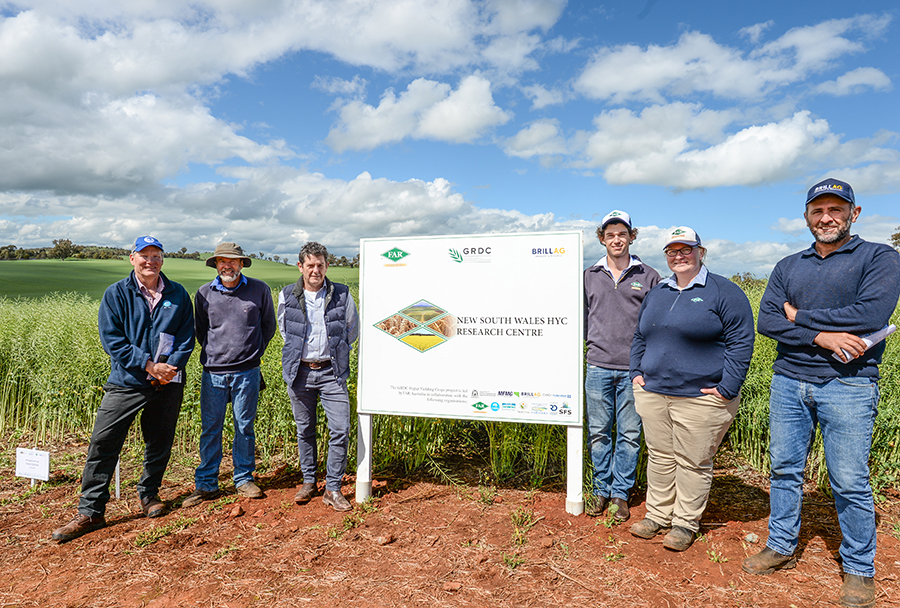 “It builds on the Hyper Yielding Cereals project that was based in Tasmania that tried to push the boundaries of Tasmanian wheat, with yields of up to 16.5 tonnes per hectare,” she says.

“In this new research, we’re looking at planting longer-season varieties and comparing them to spring wheat varieties. We are also trying to find hyper-yielding germplasm and determine what management levers we need to pull to optimise productivity in higher-yielding areas of NSW.”

The Wallendbeen research, hosted on the Baldry and Sons property, is part of a national research effort, with other small-plot research sites based in Victoria, South Australia, Western Australia and Tasmania.

The best management practices from these small plot investigations will also be scaled up to paddock level to test the repeatability of management strategies and yield outcomes in large-scale operations.

On collaborating farms, strips applied with grower equipment will be monitored to test ideas emerging from the small-plot research that are of most interest to growers. For example, testing different varieties, nitrogen management or fungicide treatments at a larger scale.

The final pillar of the Hyper Yielding Crops project is an awards program that allows growers to determine how close the crops entered in the competition get to the yield potential of their growing season and environment. This provides growers with a benchmark that allows them to identify if they need to change their management to improve yield outcomes.

For both wheat and canola, research at Wallendbeen is exploring germplasm and agronomy.

Speaking at a field day on the Baldry and Sons property at Wallendbeen, where NSW growers had a walk-through of the trials, host Charlie Baldry gave some background about his farming system.

He said good soils, high rainfall and a long growing season are no guarantee of high-yielding crops, but they are a good start.

“This district has all three and we are fortunate to farm here,” Charlie said.

The Baldrys run 50 per cent pasture and 50 per cent crops, rotated on a cycle of six years’ crop and six years’ pasture. The cropping rotation generally comprises canola and wheat.

From 2016, with help from Chris Duff of Delta Ag, precision agriculture has been used to apply fertiliser and lime. All paddocks are divided into zones based on soil fertility, using yield data, normalised difference vegetation index (NDVI) biomass imagery, soil colour and topography.

Each paddock is divided into two to four zones and comprehensively soil tested to a depth of 20 centimetres. Each zone is also tested each year for deep nitrogen and sulfur.

Nitrogen is applied at 40 kilograms per hectare as anhydrous ammonia at sowing, with monoammonium phosphate (MAP) applied according to variable-rate maps. A 100-unit test strip is also put through each paddock and monitored using satellite imagery to determine any differences.

Target yields are set at Z31 for wheat and at budding for canola. For 2020, Charlie estimated the target yield on the better wheat paddocks at 6.5t/ha, compared to 5t/ha on the less-fertile areas. For canola, the respective estimates were 3.5t/ha and 2.5t/ha. The aim of each farming zone is to apply the right amount of nitrogen to achieve yield potential.

In terms of phosphorus, application is matched to removal. For lime, the ameliorant is put where it is needed to achieve the best return.

Spraying over summer and autumn is a priority. Stubbles are grazed, but cover is maintained and only removed with burning, just before sowing.

In 2020, the Hyper Yielding Crops site on Charlie’s farm was surrounded by a crop of 45Y93 canola, sown on 16 April. The Baldry’s canola had 40 units of nitrogen at sowing, plus 70kg/ha of ammonium sulfate. Charlie said the soil test indicated there was enough nitrogen in the soil to produce a 3t/ha crop, with no extra urea needed.

As part of the Hyper Yielding Crops project, nitrogen trial strips were added at 140 units and 70 units, which Charlie said would give total available nitrogen of 400 and 320 units to achieve yields of 5t/ha and 4t/ha respectively. The paddock was sprayed for Sclerotinia with Aviator® and Prosaro®.

Charlie picked a north-facing paddock to host the Hyper Yielding Crops research. This was because, in canola, he had seen a significant difference in the biomass and yield of canola planted with a northerly aspect, which is consistently higher than the southern aspect.

“In every paddock, there is variation in soil pH of about 30 per cent in the zero to 10cm layer, with larger variations in the 10 to 20cm layer, so we are trying to even that out and put it to a position where it is not limiting yield,” he said. “They also focus on getting the timing right on any operation that can influence yield.”

Mr Duff said the family focused on making sure there was no limitation on nitrogen within the farming system.

“It has challenged our thinking and certainly made me rethink what we can apply in terms of high nitrogen rates,” he said. “We’ve gone past our comfort zones in terms of the nitrogen recommendation, but that’s purely because we now have the data to support it.”

He said there were no negative outcomes where high nitrogen rates had been applied.

At the field day there was discussion about world records for various crop yields.

At the field day CSIRO’s Dr John Kirkegaard said when it comes to growing high-yielding crops, three factors are important:

The critical period that sets yield potential for canola is one to four weeks after the start of flowering, he said. For wheat, it is three weeks before flowering.

When thinking about water supply and yield potential, he said, there were some rules of thumb to consider.

For Wallendbeen, he said, the assumed average annual rainfall is 620mm; April to November rainfall is 432mm; and December to March (fallow) rainfall is 188mm (30 per cent can be stored, which equals 56mm).

He said a 10t/ha wheat crop and a 5t/ha canola crop therefore need 400 to 500kg/ha of nitrogen supplied from soil and fertiliser to achieve those high yields.

From 2001 to 2003, Dr Kirkegaard said, CSIRO canola experiments on the Baldry family’s farm demonstrated the predicted potentials using the rules of thumb are possible.