Spend on soils can stack up

Spend on soils can stack up

Outside of land and machinery, investing in soil health can be a major spend in any grain growing business.

With the now well-known benefits of liming to improve acidic soils, plus soil amelioration to alleviate water repellency and compaction, more growers are investing in lime and strategic tillage to ultimately improve crop yields.

But while yield responses can often be significant after tillage, particularly in the first year, does the economic data stack up as well?

AgVivo consultant Joel Andrew is managing a GRDC-invested project that is considering the economic impact of soil amelioration - with and without additional lime - rather than just yield outcomes, to better understand whether such a large investment in soil amelioration will pay dividends in the longer-term.

"Soil amelioration, such as deep-ripping and spading, is a slow, expensive process that does not suit all soil types or situations," Mr Andrew says.

Mr Andrew says the data from the project is demonstrating the need to understand which soil amelioration strategy is the right fit for individual situations - which means understanding the soil type, depth of compaction, the paddock liming history, the topsoil and subsoil pH, and the environmental impacts of each different strategy.

As one part of this wide-reaching project, Mr Andrew has analysed data from a trial on the eastern wheatbelt property of Tim and Holly Cusack, where the financial returns from 12 different treatments were compared across two years of yield data.

The Cusacks have been liming their property intensively over the past 20 years, applying between four and six tonnes per hectare of lime to their soil.

Tim and Holly, who farm with Tim's parents Brian and Joan Cusack, have only recently begun their journey into large-scale soil amelioration, with a number of dry starts to the season in the past few years and a lack of subsoil moisture holding up their deep-ripping program.

"We need to have a bit of moisture in the profile to allow the deep-ripper to get down to depths of around 550mm," Tim says.

"But we have had a run of very late starts to the season, which has meant we haven't been able to do as much ripping as we would have liked.

"But the plan is to keep ripping all the sandy soils on the property over the next five years."

Tim believes the dual constraints of compaction at depth and this subsoil acidity are restricting root growth which, in turn, restricts plants' ability to access moisture, particularly at the end of the season.

We need to have a bit of moisture in the profile to allow the deep-ripper to get down to depths of around 550mm.
Narembeen grower Tim Cusack
"This means not only deep-ripping to allow a pathway for plant roots, but also using inclusion plates to incorporate the lime that we have applied to the surface over many years," Tim says.

"We don't think that there is much point in creating these root pathways if the roots are still constrained by acidity at depth."

The Cusacks have purchased a deep-ripping machine to begin a long-term ripping program in the lighter soil types across their property.

"In some on-farm trials we undertook ourselves a few years ago, we saw an initial yield improvement of around 1t/ha in the canola in just the first year," Tim says. "At average returns of $600/t, the investment has paid for itself in just one year."

Subsequent yield improvements have also been encouraging and Tim says he can still see positive yield benefits five years down the track on these deep-ripped trial plots.

For AgVivo consultant Joel Andrew, the purpose of his economic analysis project is to give growers greater financial confidence in their investment decisions and to better understand the real cost of investing in soil amelioration to a grain business.

Undertaking any type of soil amelioration is costly - not only in regard to the hire or purchase of machinery, but also because of fuel costs and time.

"Plus, there is also the unknown business cost of any strategy that has a negative impact on yields," Mr Andrew says.

"In this trial, we set out to find which lime and amelioration combination would provide the best return on investment over a two-to-three-year period, and so we really pushed up the lime rates to do this." What Mr Andrew discovered in analysing this data is that a number of treatments in this trial actually achieved a negative return - meaning that not all amelioration or additional liming will pay dividends. 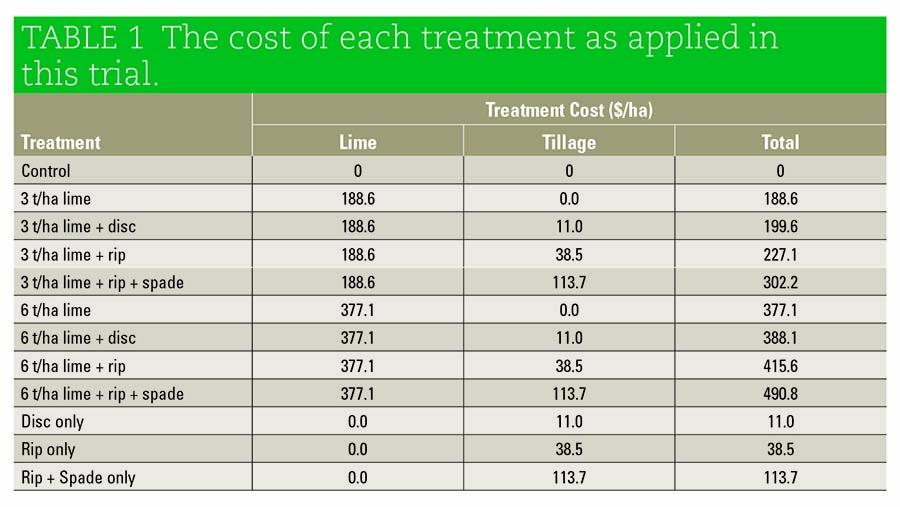 The treatments were applied in 2016, with canola planted in 2017, followed by wheat in 2018. A dry start to the season in 2017 meant patchy canola establishment, particularly on the spaded plots, where the uneven and soft seedbed made accurate seed placement difficult.

Despite the dry start in 2017, Mr Andrew says all the canola in the deep-ripped treatments returned the highest yield increases when compared with the control.

"What we found after analysing all the results was that the biggest net return (minus all costs) came from the ripped-only treatment, and this return was significantly higher than all other treatments," Mr Andrew says.

"While we could have assumed that mixing the extra lime through to the subsoil via amelioration would immediately provide increased yields and the largest return on investment, this wasn't necessarily the case."

The largest loss came from the treatment that was deep-ripped, spaded and had 6t/ha of applied lime.

Mr Andrew says while this wasn't entirely surprising, given the very high cost of the treatment, the impact of poor crop establishment in the first year had meant the financial loss was much bigger than anticipated. 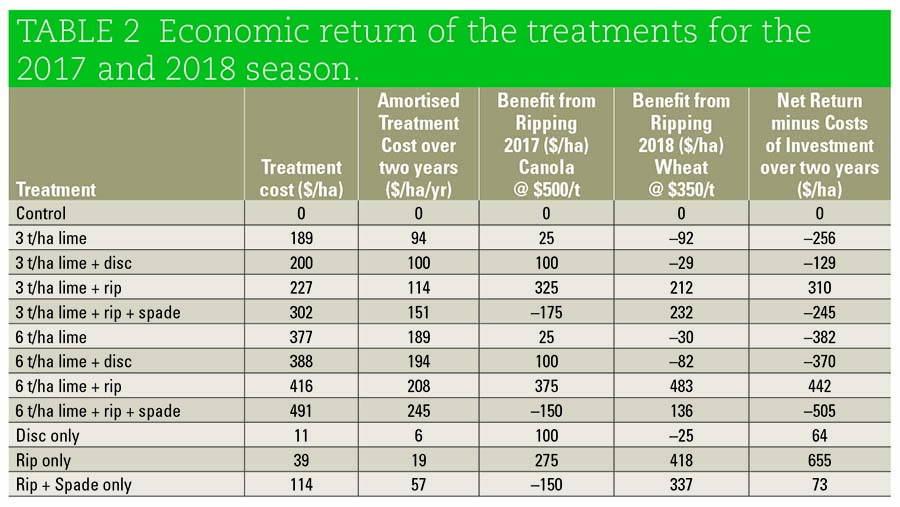 "We knew this particular treatment was excessive in terms of lime application and amelioration, but we wanted to push the boundaries to see what was possible - to see if there would be any financial upside - and clearly there wasn't that upside in making this excessive investment," Mr Andrew says.

Another interesting outcome was the lack of any yield benefit when compared to the control, from either the canola in 2017 or the wheat in 2018, in the treatment with 3t/ha or 6t/ha of applied time with no tillage.

"Again, this demonstrates that the topsoil had been adequately limed already and there has not been enough time for it to move through to the subsoil.

"But it also shows that without any incorporation, this additional lime had no economic benefit in a short timeframe but can, in fact, erode business profits."

What does this mean for growers?

Mr Andrew says growers can interpret these results in a number of ways, but the most obvious message is that lime previously applied on to the surface over a number of years can provide immediate benefits when incorporated into the subsoil.

"The Cusacks have been liming for a long time and, while their topsoil pH had improved, their subsoil levels didn't improve until this lime was incorporated and the deep-ripping removed soil compaction as a constraint," he says.

"The ripped-only treatments were the best return on investment, but I doubt we would have seen this result if there had been no previous liming history on this paddock.

"Tim and Brian have been liming for many years at relatively high rates, so that cost has been accounted for, and now isn't a huge outlay for their business."

Given the expense of soil amelioration, Mr Andrews says, growers could find themselves unnecessarily spending on treatments that may not provide an economically viable result.

The cost of soil amelioration

"In the deep-ripping plus spading plus the application of 6t/ha of lime treatment, we saw the biggest loss of $505/ha, so this was not just an over-capitalisation on lime spending, but also on the two different amelioration strategies," Mr Andrew says.

"Lastly, if there is no liming history, applying high rates of lime at the same time as incorporation may be the only way to achieve yield responses but, economically, it's likely to take longer than two years to see a return on investment."

Tim agrees with the research findings that are showing the importance of incorporating lime that is not dissolved.

While his liming program may be slowing down, his amelioration program will go full steam ahead in coming years.

"We believe in the value of lime to the business, so we have invested heavily in lime over a long time and we are almost at the stage now where we can scale this investment back, which will allow us to invest more into deep-ripping," he says.

"Deep-ripping allows us to create these root pathways and the inclusion plates push the lime that we have already applied down to depth."