A landscape dominated by potato and onion production in north-western Tasmania might seem an unlikely place to find growers talking about cereal grains and how to market them.

Cereals, however, occupy an important role as break crops in farming systems across this vegetable-dominated growing region – but they are not without their challenges.

For years, growers from the state’s north-west have faced production constraints growing wheat and barley in a high-rainfall environment which, in turn, has thwarted the consistent supply of cereal grains to domestic feed grain markets.

“We receive about 1200 millimetres of rain a year,” says Michael Nichols, who runs Redbank Farming on 385 hectares with his wife Rochelle at Sisters Creek, Tasmania.

“Our number-one decision is often whether the ground is dry enough for us to get on to it with machinery. It was a nightmare because we could rarely get our cereals harvested at the moisture levels required for storage.

“We had grain loads rejected, and we had harvest opportunities of only half an hour to an hour to get the crop off and we had difficulty accumulating a large volume of grain.”

Helping to overcome some of these high-rainfall cropping challenges, and also fill a gap in the supply of cereal feed grain to nearby dairy farmers, Michael and Rochelle came up with an ingenious, cooperative solution.

In 2018, the Nichols established a pool organisation, called North West Grain Pool, that brings together a group of local farmers in north-western Tasmania, including many growers for whom Michael has worked as a harvesting contractor.

The pool supplies wheat and barley feed grain to Tasmanian dairy farmers who had previously relied on Australian mainland supplies.

“My wife Rochelle came up with the idea of the pool and I developed a system of segregating grain at harvest in different silos,” Michael says.

The pool’s grower members grow either wheat or barley on an agreed area and Michael works out the price before harvest. He then harvests, stores and dries the grain, and charges growers $30 per tonne.

Growers are paid monthly, according to their share of the pool, since the grain is sold to dairy farmers throughout the year.

“We have 12 growers in the pool this year and we need about 3000t of wheat and 450t of barley, so we have reliable year-round supply for our dairy farmer customers,” he says. 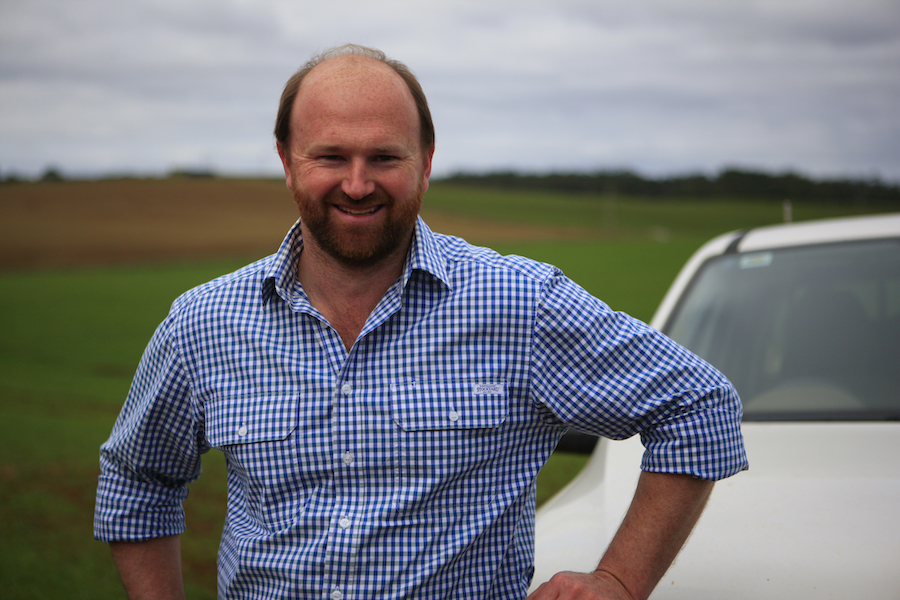 For pool member Robert Wade, who grows about 50ha of wheat and barley at nearby Table Cape, its main benefit is convenience.

“Header arrives, grain comes off. Trailers, trucks and whatever is needed arrives, the cereal grain goes into a silo and I start getting paid every month. That is the value proposition,” Robert says.

Although vegetables are the district’s mainstay cropping enterprise, Michael says, the pool helps to maximise the value of cereals, particularly as a break crop.

“Our average wheat yields are about 10t/ha, and we sell the straw too, so in a year when cereals achieve $300/t, most growers make more than $3500/ha for wheat and barley.

“That has covered all their crop production costs; growers are making money and they have the convenience of the harvesting and selling being done for them.”

All the pool wheat is red feed wheat, with Einstein the most common variety grown. Einstein is one of the high-performance varieties suited to the Tasmanian growing environment identified as part of the GRDC-invested Hyper-Yielding Cereals (HYC) project.

Red wheat’s capacity to tolerate high grain moisture without shooting from the head, combined with yields of 11t/ha to 13t/ha, are big advantages, Mr Poole says.

“Red wheat was a bit controversial to start with because dairy farmers were accustomed to Australian Standard White (ASW) wheat,” Michael says.

Even though the yields in Tasmania are high compared to mainland Australia, grain is our lowest-return crop, so it has to be easy.

But he says comparison of pool wheat and barley samples with Australian mainland samples found the Tasmanian grain was higher in crude protein and starch, which are both important components of dairy feed.

Mr Poole says the nutritive value of cereal grains collected from Tasmania for the Feed Grain Partnership were often the highest in Australia.

And there was sufficient variation in nutritive values to justify trading Tasmanian feed grain on that basis, rather than test weight and prevailing feed cereal prices.

He says these findings, plus those of a HYC case study with Michael looking at the interaction between grain growers and dairy producers, also demonstrated that the high quality of Tasmanian feed wheat and barley could underpin expansion in domestically sourced feed grains for the state’s livestock industry.

The Nicholses already had some on-farm grain storage, but Michael decided they needed more options, such as a diesel-fired dryer and aeration capability in silos, which is critical for storage in Tasmania.

Investment return comes via the payment for storage and handling, roughly $35/t, and harvesting contract work, which helps justify and pay for a larger-capacity header, so Michael can get the crop off quickly when conditions are right.

“Even though the yields in Tasmania are high compared to mainland Australia, grain is our lowest-return crop, so it has to be easy,” Robert says.

Michael says the pool’s biggest challenge is delivery logistics, because it can be tricky to time grain deliveries to dairy farmer customers so their silo storage does not run out and he does not cut his margin by delivering half-loads.

But even that has a silver lining. “The dairy farmers are really happy, partly because I have taken over management of their silos,” he says.

In terms of his own property, it is more a case of what Michael does not grow on his 385-hectare farm at Sisters Creek in north-western Tasmania than what he does.

While potatoes, onions and poppies are mainstay enterprises that largely pay the bills in this high-rainfall area, Michael and his wife Rochelle also run steers and grow wheat and barley. Plus, the couple crop canola – and press their own canola oil – and they produce carrots, peas, pyrethrum and plantation saw logs. 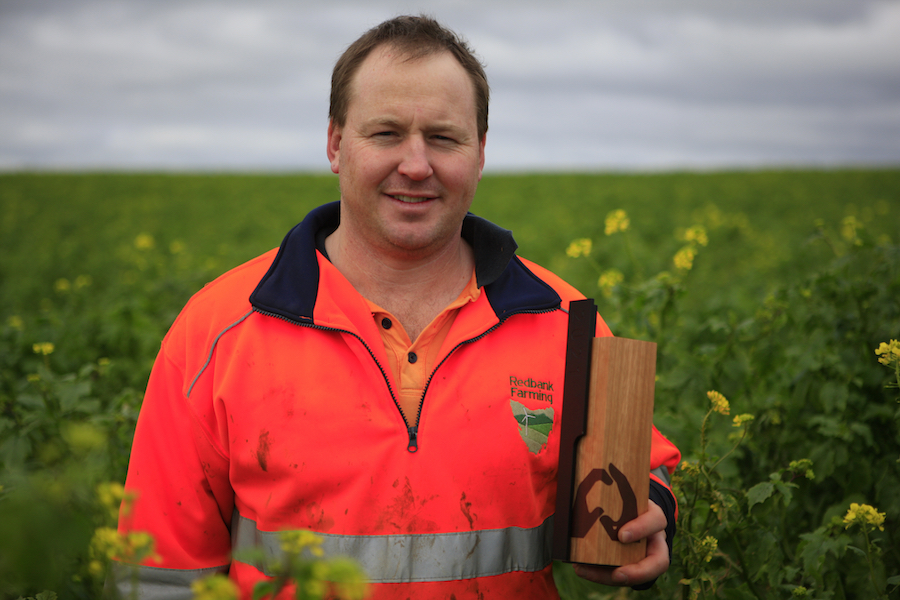 But it is adoption of innovative farming techniques and tools that saw Michael win the 2021 National Landcare, Australian Government Innovation in Agriculture Award.

Take their cereals production, for example. Wheat and barley are break crops in the Nichols’ farm business, but they benefit from the same detailed analysis and progressive approach used to grow high-value vegetable crops.

“Grains are fantastic crops in our farming system because they can break the soil hardpan that we create through our vegetable cropping,” Michael says.

“They improve the organic matter in our soil through microbial and worm activity. That is why people in this area grow grain crops – mainly because of the soil health benefits.”

The sizes of the Nichols’ paddocks range roughly from nine to 14ha and Michael does soil grid mapping to guide variable-rate applications for inputs, including lime to ameliorate soil pH. This is based on two soil samples per hectare.

That gives him a digital map with geolocated paddock values for soil pH, magnesium, calcium, phosphorus and potassium.

“We soil test in front of potatoes or onions because they are our largest fertiliser users and then I use a variable-rate map for spreading lime or dolomite or single superphosphate (SSP) or muriate of potash (MOP),” he says.

The Nichols do not sample for soil nitrogen because of the high rainfall (about 1200 millimetres a year). Instead, their nitrogen fertiliser applications are based on normalised difference vegetation index.

Michael only has one soil type, being ferrosol, but the farm landscape is undulating, which means nutrients leach from the hills and become concentrated in gullies.

As a consequence of this uneven nutrient distribution, the yield map from the header showed that wheat yield across paddocks varies by up to 40per cent. However, by using soil mapping and variable-rate applications, they were able to halve this yield variability. “We are reducing lodging problems in the gullies and getting better yields from our hillsides, which evens up the yield across paddocks,” Michael says.

“And that is probably why we ended up with the record Australian wheat yield of 13.1 tonnes/ha.”

He says they do not apply less nitrogen to cereals using variable rates, but it has allowed for more-targeted fertiliser applications, leading to better plant uptake of nutrients and reduced losses.

And while grains are unlikely to return profits that rival potatoes in Tasmania’s wet north-west, Michael aspires to further increase his cereal cropping yields. “With new cereal varieties becoming available and better technology, I hope we can start pushing yields a little higher,” he says.