Michael says fire safety is top of mind this season after lightning sparked a small – but frightening – paddock fire about two weeks into harvest in late November 2020.

It only burnt a few hectares of a windrowed barley paddock, and the fire that started at 6am during a dry electrical storm was extinguished by 7am. Nonetheless, this on-farm blaze, plus two nearby paddock fires during the 2020 harvest, left an indelible impression on the Treloar family.

“No matter how prepared you are for fire, it still gives you a scare,” Michael says.

Although the incident demonstrated the family’s emergency response system could control a low-intensity fire, he says, it also showed there was room for improvement.

In the lead-up to harvest this year, for instance, Michael custom-fitted a firefighting unit, with a 400-litre water tank, to a chaser bin.

The new set-up enables Michael to more rapidly respond to a fire without leaving the paddock during harvest. “Installing the unit on the chaser bin means we can immediately access firefighting water.”

In the past, he has relied on three firefighting units positioned on the perimeter of the paddock being harvested. These comprised two firefighting units, both with 400L tanks mounted on utes, plus a tractor-towed boomspray with a 4200L tank.

But minutes spent reaching, relocating and activating these distant firefighting units become precious when flames can engulf a tinder-dry, bulky crop in seconds. For example, while sheltering inside his shed, Michael watched last year’s fire start spreading within moments of the lightning strike.

He immediately alerted the SA Country Fire Service, neighbours and his family, before dousing the flames alone in the paddock using his ute-mounted firefighting unit.

The fire was brought under full control with help from neighbours using their own ute-mounted firefighting units, and his brother John using a tandem trailer-mounted unit with a 600L tank.

It was a close call that prompted a rethink of the farm’s fire-safety strategy, which now includes the chaser bin-mounted firefighting unit.

“Paddock fire, particularly in fire-prone lentil cropping, is one of our biggest safety risks during harvest,” Michael says. “Fire preparedness, emergency planning and safety protocols are critical in the lead-up to harvest.”

For instance, the Treloars ensure that all farm workers and contractors are familiar with emergency plans and safety equipment use, such as firefighting units and machinery safety features.

“We use air compressors to blow down machinery before starting harvest each morning and at intervals during the day when harvesting high-risk crops such as lentils.” 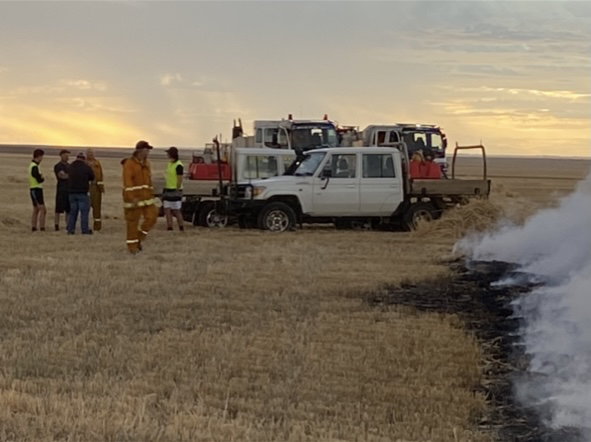 Michael has custom-fitted a firefighting unit, with a 400-litre water tank, to a chaser bin so he can rapidly respond to a fire without leaving the paddock during harvest. Photo: Michael Treloar

As best practice, Michael emphasises the importance of checking that hydraulic and ram locks have been fitted, and that the harvester comb is chocked and supported before beginning maintenance under header fronts, combs and raised hydraulics.

As a workplace, health and safety (WHS) champion for the GRDC Southern Panel, Michael urges growers to prioritise five WHS hotspots during the 2021 harvest:

He says the perennial problem of fatigue is likely to be compounded by on-farm labour shortages due to COVID-19 travel restrictions this harvest. To minimise operator fatigue, the Treloar family adhere to set start and finish times for 12-hour working days over the farm’s four-to-five-week harvest period.

They typically start up the headers at 10am and knock-off at 10pm. “We might harvest a bit later when a wet weather front is forecast, but we generally resist the temptation to continue harvesting beyond those set hours.”

Where are the kids?

Michael says the most important WHS consideration at harvest is child safety. He strictly enforces an on-farm policy: “keep children off machinery and know where they are at all times”.

This year’s findings of a safety report, with a focus on farm accidents, highlight the importance of rules, principles, guidelines and frameworks to help protect children from health and safety risks in grains operations.

The Safer Farm Report 2021, released by Farmsafe Australia, found that children (under 15 years) accounted for 10 per cent of farm fatalities and injuries in the first half of this year.

“Farms provide such a unique and exciting opportunity for children to learn while they grow, and talking to them about safety in the farming environment is critical,” Ms Howdle says.

“We need to make sure that we set clear and consistent boundaries and we teach children what and where the risks and hazards are, how to react in an emergency, and how to safely engage in age-appropriate tasks with adult supervision.”